The Citroën C3 Picasso is a mini multi-purpose vehicle (MPV) produced by the French motor company Citroën since 2008. It was first unveiled at the 2008 Paris Motor Show as a concept car named "Drooneel", and was designed by Donato Coco and Jean-Pierre Ploué. The Picasso is the MPV version of the Citroën C3 and the successor of the Citroën Xsara Picasso, and was designed to compete with the Opel Meriva, Nissan Note, Renault Modus and Ford Fusion.

The vehicle was adapted for an "urban-off-road" appearance for the Latin America market, where it has been sold as the Citroën C3 Aircross since 2010.

The first C3 Picasso was assembled in December 2007 at the PSA Trnava Plant in west Slovakia, which Citroën announced from France in July 2008 would be the sole manufacturer of the model. Citroën presented the finished product to the Slovak press and public on 25 September before it was unveiled to the world in October at the 2008 Paris Motor Show. The Trnava Plant by then was expected to be building 28 cars per hour as the C3 Picasso went on sale in France in February 2009 for €14,950. The company began to sell the car in other European markets in March 2009. 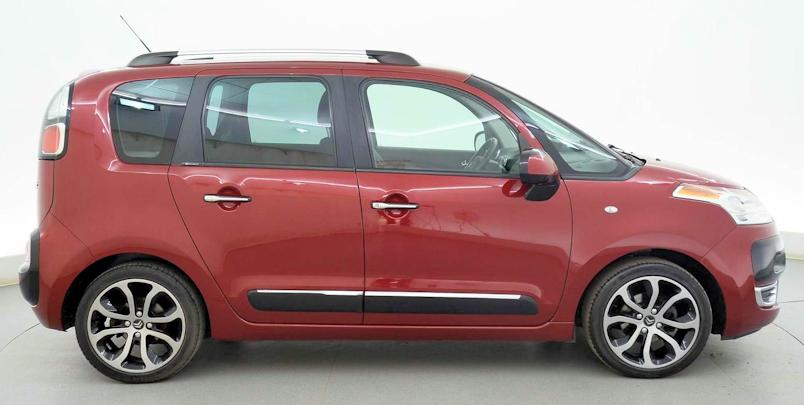 All C3 Picasso models have an anti-lock braking system (ABS), Electronic brakeforce distribution (EBD), child locks, remote central locking and two front airbags. The vehicle is only available as a 5-seater, but with all models the three rear seats can be folded flat to increase the boot capacity from 385 litres (13.6 cu ft) or 500 litres (18 cu ft) including the hidden compartment to store the parcel shelf, up to a maximum of 1,506 litres (53.2 cu ft). The Exclusive model features a folding front passenger seat to increase the storage space further. All models in the range have a "Mistral Maxi Taylor" woven cloth interior; according to Citroën, top European engineers and designers including Donato Coco and Jean-Pierre Ploué were involved in designing the vehicle.

Optional accessories are available for the range, including an aluminium roof rack capable of carrying 60 kg (132 lb) and kerbside lights in the door mirrors. Also available are: 16-inch (41 cm) and 17-inch (43 cm) alloy wheels with a choice of two patterns, chrome mouldings for the bumpers and doors, front fog lamps and cruise control, rear parking sensors, automatic lights (standard on some variants), Electronic Stability Control (ESC) and a speed limitation device – which are commonly used for safety reasons or to reduce fuel bills. A seatbelt reminder, which can be added to the passenger and rear seats, is fitted to the driver's seat as standard.

The chassis platform used for the C3 Picasso is a modified version of that in the Citroën C3 and the Peugeot 207, giving it a comparable wheelbase. The reuse of automobile platforms is commonplace, especially for Citroën because the Trnava plant builds the Peugeot 207 and the C3 Picasso. The parent company PSA Peugeot Citroën pools resources and manufacturing for some vehicles, and sometimes rebadges vehicles, combining design teams between two or more brands to create a shared product. The advantage is the designing and testing vehicles at a reduced cost for the participating brands, but creates multiple, identical-looking vehicles for the market, sometimes with minor styling differences. Examples include: the Fiat Scudo, Peugeot Expert and Citroën Dispatch, the Toyota Aygo, Peugeot 107 and Citroën C1, and the Peugeot Partner and Citroën Berlingo. Citroën placed a contractual obligation on the manufacturers to use green materials for the C3 Picasso range. These comprise ≥11% of the 170 kg (374.8 lb) of polymers on the vehicle, including the mudguards, parcel shelf and boot carpet. Citroën recommends the vehicle is serviced at least every two years, or at every 20,000 miles (32,000 km) for petrol models and 12,500 miles (20,100 km) for the HDi diesel models.

When equipped with the 1.6-litre VTi engine, the C3 Picasso Exclusive and VTR+ models are capable of a top speed of 117 mph (188 km/h) in 10.6 seconds and 120 bhp (89 kW; 122 PS). This 1.6 litre and a smaller 1.4 litre VTi petrol engine, were developed by PSA Peugeot Citroën and BMW, along with a 1.6 L diesel engine and the two 1.6 L HDi Airdream engines. Every model came with a 5-speed manual gearbox until 2011, when 6-speed manual and automatic (EGS6) manual versions were introduced, along with an eco-friendly start-stop system and regenerative braking technology in certain models, notably the Exclusive and Tendance models for the German market. According to Citroën, these two new features reduce CO
2 emissions significantly and their introduction coincided with the release of a higher specification Airdream engine, the European emission standards (Euro 5) carbon dioxide emissions limits were lowered and the addition of low-rolling resistance tyres were added to the entire range. The tyres are specially designed to minimize wasted energy when the tyre rolls and have been estimated by the California Energy Commission to save 1.5–4.5% of fuel in a typical car.

At first Citroën decided not to offer their new automatic EGS6 gearbox version in the UK due to the unfavourable exchange rate and costs, although this changed after a small number were privately imported for insurance classification purposes. The EGS6 gearbox became an option for the 1.6 L VTi engine models shortly after. The complete vehicle lineup includes multiple models and engine configurations, all with different specifications and tuning:

The European New Car Assessment Programme (Euro NCAP) tested a C3 Picasso Confort 90 bhp (67 kW; 91 PS) model with standard equipment, including: a single forward airbag for each front seat, a speed limitation device, but no ESC. The vehicle was scored on the basis of: child and adult injury, including whiplash risk from the seating, a pedestrian front impact rating, safety equipment and clear labels detailing how to disable some features. The results of the front end tests were mixed, with the bumper scoring all available points, but the vehicle was penalised for the lack of protection and the potential damage caused if a pedestrian is struck by the bonnet. Protection inside the car was scored highly for almost every seat, and for adult and child protection; it lost points for its use of forward-facing restraints, which can be fatal in an accident if an infant is hit by an airbag. The C3 Picasso was also penalised for offering very poor whiplash protection in the driver's seat – scoring nothing in two of the three tests and then losing points for the position of the unadjusted restraint. Overall, the vehicle scored four of five stars, less than most vehicles the Euro NCAP compares it with, which were released around the same time.

On 20 June 2010, 611 C3 Picassos built between January and March 2010 were recalled due to incorrectly routed fuel pipes, which were believed to have been in contact with the heat shield. This fault may have caused chafing and may lead to a fuel leak. The models were built between January and March 2010 and were sold in the UK. On 24 August 2010, all 13,234 Picassos sold in the UK were recalled because the windscreen trim could deteriorate, and could eventually detach, leading to a loose-fitting windscreen.

In May 2011, all 24,091 C3 Picassos in the UK were recalled for a safety modification, following complaints and an investigation by BBC consumer affairs programme Watchdog into brakes that could be activated on the passenger side of the right-hand drive vehicles. The problem occurred because of the way the vehicles were modified for right-hand-drive. The investigation showed that although the brake pedal had been moved to the right, it was still connected to a mechanism on the passenger side. This was covered by felt carpet and meant that both the front passenger and driver could activate the brakes. A further investigation by Watchdog later found the same problem in other Citroën models and some vehicles produced by Renault and Peugeot, some of which were registered in 2002. All three manufacturers worked with the Vehicle and Operator Services Agency (VOSA) to identify the severity of the problem but no vehicles were found to be affected enough to issue recalls.

8,815 Picassos built between January and May 2011 for the UK market were recalled on 2 September 2011 when it was discovered that the battery cable was too short and could cause gearbox failures and in turn stall the engine. The faulty earth return cable was replaced.Despite the recalls, the vehicle continued to sell well in the UK and has won numerous awards.

Critics praised the Citroen C3 Picasso in reviews for its ergonomics, Bauhaus-inspired styling, ease of use and the amount of space offered, many reviewers criticised the interior, which they said felt "cheap". The quality and reliability of the petrol engines was criticised by most reviewers as "sluggish" and struggling to carry the weight of the vehicle, although the diesel engines feedback was more positive as they are able to cope much better and run smoother. Reviewers' comments about the tight turning radius of the vehicle were favourable. The combination of the panoramic three-part windscreen, thin door pillars and high seats, which together increase the visibility of the road – led one reviewer to compare it with a greenhouse.

The car has three monitors on the dashboard, the first monitors the status of important components, while the second controls the sound system, and the last is a rev counter, digital speedometer and the fuel gauge. CNET described the speed gauge monitor as clear and "close to the driver's natural line of sight", but criticized the other two monitors for being unreadable and possibly dangerous if used by the driver while the car is moving. Some reviewers complained about the vehicle's soundproofing, which could not adequately conceal the screech of the wind. The engine at high speed received mixed reviews, while a number of reviewers reported a fault with the screenwash bottle, which can freeze in cold weather and blow a fuse when used. The reviewer for European Car of the Year 2010 called the nominated C3 Picasso fuel efficient, but said it had "dull steering".

UK publication Top Gear Magazine awarded the C3 Picasso "Family Car of the Year" in 2008, stating "This is what a 21st century family car should look like". Michael Harvey, the Editorial Director of the magazine admitted they had taken a chance as the model was not available in the United Kingdom until the following year. In 2009 when the car was finally launched the awards increased, first with "Best MPV" at What Diesel's Car of the Year Awards, "Scottish MPV of the Year" at the Scottish Car of the Year Awards, "Best Supermini MPV of the year" at "Auto Express New Car Awards" and finally "Design of the Year" at the Fleet World Honours. The vehicle was nominated for European Car of the Year in 2010, but received the lowest overall score of any candidate, finishing last, in seventh place. The JD Power survey in 2011 announced the C3 Picasso as the best MPV on the market, with a satisfaction rating of 83.1% and five stars overall, but with the lowest rating given to the exterior quality at three stars. Many reviewers had complained of poor fitting and the finish used on the exterior.

The facelift of the Citroën C3 Picasso appeared first at the 2012 Paris Motor Show on 27 September. The new eMyWay SatNav system, located on the central console, is more functional than the previous model, allowing connection to a reversing camera (available as an extra), which displays on the console screen. LED daytime running lamps and fog lamps with built-in cornering lamps, which illuminate the roadside, are also non-standard features on the facelifted C3 Picasso. In addition, Citroën has added two new exterior paint colour options; "Pearlescent white" and "Ink blue" to the vehicle. The front grille now features Citroën's new branding, joining the two chrome chevron badge in the form of a crown. 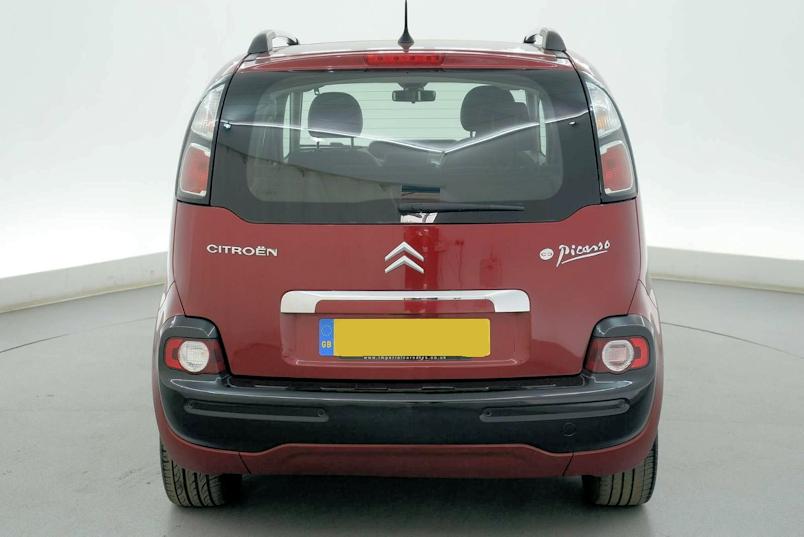