The Citroën DS5 is a compact executive car by French automaker Citroën that was launched for the European market in November 2011. It is the third model in the new premium (Luxury vehicle) sub-brand DS and runs alongside its mainstream cars. The DS5 was revealed at the 2011 Shanghai Auto Show in April 2011.

Although Peugeot and Citroën products have shared platforms and principal components since the closing decades of the twentieth century, the DS5 became in 2011 the first Citroën branded car to be assembled in Peugeot's lead European plant at Sochaux.

The DS5 mixes hatchback and estate styling resembling a shooting-brake. The styling was influenced by the C-Sportlounge concept car shown at the 2005 Frankfurt Motor Show. It is 4,530 mm (178.3 in) long and 1,871 mm (73.7 in) wide, dimensions that are similar to those of the Lancia Delta. This is hardly a coincidence: the DS5 is based on the PF2 platform as 3008 is too, not on the C5 as its name would imply.

Like the original concept car, its interior is heavily aviation inspired and available with two centre consoles - one of which is located on the roof directly above the other. With a head-up display in front of the driver, the cabin is designed to resemble a jet aeroplane. Emphasising its links to aviation, and the original Citroen DS model, the carmaker recreated an old photoshoot of the car with Concorde.

Buyers are able to choose between a turbocharged petrol and two diesel engines, but the drivetrain that Citroën is focusing on is PSA's diesel-electric Hybrid4. It marries a 163 hp 2.0 HDi diesel engine with a 37 hp (28 kW) electric motor mounted on the rear axle and sends the power to all four wheels as it is needed. Depending on trim level, this powertrain emits 99g/km or 107g/km CO2, and the car can drive on electricity alone if the battery is sufficiently charged. It is also worth noting that the DS5 will be the first Citroën with a hybrid drivetrain, and the first production car with a diesel-electric hybrid drivetrain.

A hybrid convertible Citroën DS5 was chosen by François Hollande for his investiture parade as President of France.

The DS 5LS had been launched in March 28, 2014, it is the first DS model that applied "DS wing" front face design and wears independent DS logo and this model is considered as a declaration of the independence of DS brand.

The Guardian's Martin Love reviewed the DS5 giving the car a positive review towards the design. However he also mentioned that the DS5's gearbox feels jerky.

What Car? has reviewed the DS5 giving the car a 2 out of 5 stars complaining that it rides poorly for an executive car. The readers however gave the car 4 stars.

Top Gear reviewed the car during October 2011, they gave the DS5 a 7 out of 10, they approved the cars design. 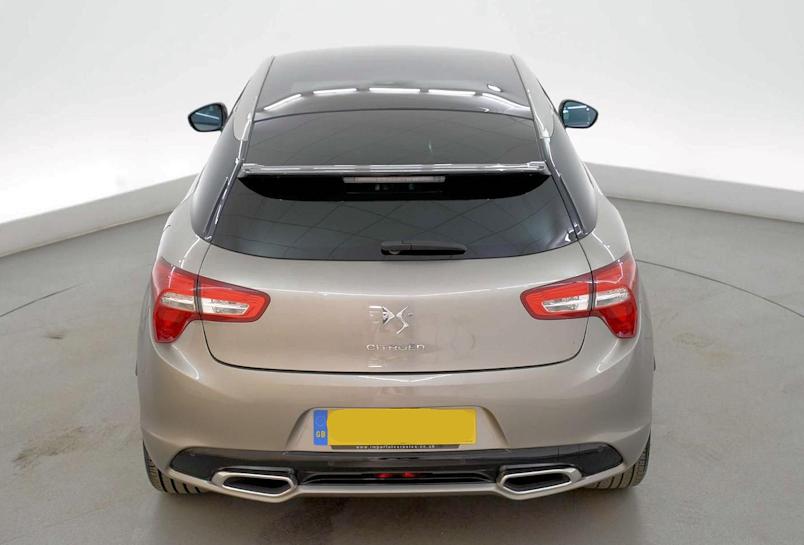