The Citroën DS4 is the second model in the new premium (luxury vehicle) DS sub-brand created by Citroën to run alongside its mainstream cars. It was officially launched in 2011 internationally, but already on sale in some countries in late 2010. Based upon the Citroën C4 II, it features raised suspension to resemble a compact SUV and repositioned door handles to give a coupe-like silhouette. The rear windows are fixed, and do not slide or open outwards.

The petrol engines that power the DS4 are a product of a collaboration between PSA and BMW. All are 1,598 cc four-cylinder, 16-valve units. The base VTi 120 is normally aspirated and puts out 120 PS (88 kW). As its name implies it comes with variable valve timing. The next engine up is the THP 155, essentially a turbo-charged version of the VTi. It puts out 156 PS (115 kW) thanks to a twin-scroll turbocharger and dual overhead cams. It is mated to a 6-speed manual transmission. The most powerful gas engine available in the DS4 is the THP 200. It's a variation of the THP 155 previously mentioned but pushed to 200 PS (147 kW).

The DS4 is available with Start&Stop technology and Citroën says that the battery has been optimized to withstand up to 600,000 starting cycles. The trunk are 385 L and 1021 L with the back seat folded down on all models.

The DS4's styling has been very well received by the international press.

It was elected Most Beautiful Car of the Year at the International Automobile Festival beating BMW’s new F10 5 Series and Honda's new CR-Z hybrid car. German magazine Auto Bild and its partner magazines throughout Europe have given it 1st Prize for Design in its category in Design Award contest. 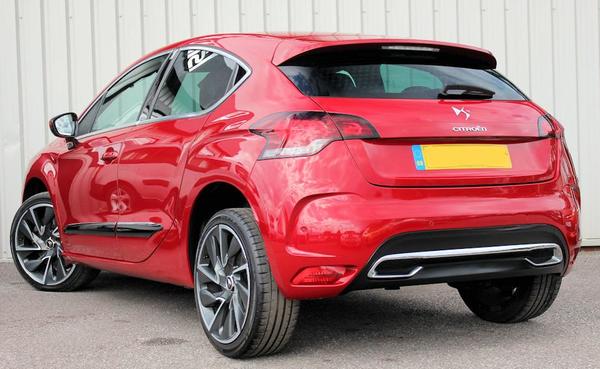