To cope with the market, Citroën was dedicated and committed to building a new model that would appeal to many customers. At the Geneva Motor Show in 2004, a concept from the Citroën line's definitive made-bodied coupé revealed the willingness of the French company to employ it in competition. The car was finally unveiled at the Paris show. However, that version was a more domesticated hatchback coupé or five-door.

The C4's design was created by a team that included Donato Coco and Jean Pierre Ploué.Building on the floor of its cousin, the Peugeot 307, the C4 was immediately made available in two body variants: five-door hatchback and three-door coupé. The front is common to both versions, with the grille formed from virtual extensions of the central crest. The sedan is much more rounded and features softer shapes, so they can boast a Cd of just 0.28, while the coupe is more angular, with a rear split into two parts, including lights.

The rear window of the coupé is reminiscent of the older Honda CR-X from the early 1990s, as well as the last three-door Mazda 323C. These two versions of the C4 Picasso are more detached, taking over the grille of the sedan and coupe, but the cut of the headlamps are different, aesthetically combining corners and curves. The rear lights incorporate the design as in those of the sedan, but were adapted to the different shape of the body. Internally, the dashboard features a central instrument panel that centralizes all heating and cooling controls, audio, and a satellite navigation screen. The instrument panel contains digital and analog displays of the speedometer, petrol levels, and other gauges. Lighting can be customised to change colour from white to blue.

The revolution, however, is placed in canonical position, behind the wheel. The latter is multifunctional and characterized by having a fixed hub. The cabin is equipped with numerous storage compartments and the luggage compartment is regular in shape, with a capacity of 352 liters, increasing to 1,200 after lowering the rear seat backrest. The load threshold is quite high, hitting the loads of heavy objects. There are laminated side windows and exterior mirrors, with casing specially designed to prevent wind noise and improve comfort inside.

The saloon version is manufactured in Argentina, where it is sold alongside the three-door version. It is exported from there to Brazil and Hungary as the C4 Pallas, to Spain as the C4 Berline, and to Turkey and Greece as the C4 Sedan. A longer four-door saloon version with a different rear end is also built and sold in China as the Citroën C-Triomphe. A panel van based on the coupé bodyshell is available in some markets, including Ireland.

A major selling-point of the C4 was its extensive use of technology. For example, the car features the "lane departure warning system" (only in the top-of-the-range "exclusive" model), which alerts the driver if he or she crosses a road marking without using the turn signals; directional headlights; perfume dispenser integrated into the ventilation system; translucent dashboard; transparent glass roof; electronic stability program (ESP), and a fixed steering wheel hub, which lets the driver operate several functions of the car without removing his or her hands from the wheel.

The fixed hub also allows for the first production use of a "shaped" driver airbag. Because the hub maintains a constant position, the airbag can be optimally shaped to spread the load across the greatest possible area of the driver's body in a collision, thus reducing the chances of serious injury. In addition, the car features an innovative centrally mounted translucent LCD speedometer display that remains clearly visible in all lighting conditions.

Surprisingly, given the emphasis put on technology, the car's in-car entertainment, while well integrated into the car's information system via CAN bus, is not Digital audio broadcasting (DAB) ready. MP3 playback is supported by the entry level audio system and high-end audio, with double-layer sound-insulated windows and integrated navigation system available as extras. In September 2007, a USB box accessory (Ref: 9702.EZ) was released to enable full iPod connectivity with the standard RD4 radio.

The C4 does not feature Citroën's Hydractive suspension, which is reserved for higher class models, such as the C5 and C6. The Picasso version can feature a pneumatic rear suspension. The C4 breaks with the past on other fronts, in particular by removing the rear autodirezionale solution, used up to that time on the Xsara and ZX. The suspension was very classic, and included the usual type MacPherson strut front suspension with coil springs, while the rear was interconnected wheels with torsion beam and torsion bars. The braking system includes ventilated discs on the front, and rear solid discs with ABS and ESP (not standard versions with basic fittings). The steering is rack and pinion with electro-hydraulic power steering.

At the end of 2008, the C4 hatchback and coupé were subject to a slight cosmetic makeover that involved the front end, which now sported a "mouth" and larger trapezoid shape. The grille was redesigned, making it slightly curved. There were also minor updates in the queue. The redesign led to a slight lengthening of the car body, and was the occasion for more news: from the mechanical point of view was the arrival of the 1.6 Prince, with variable valve timing and aspiration, and turbocharged and direct injection, already mounted on the Peugeot 207 and 308, as well as the Mini. Ride comfort was greatly improved, and the more simplified sedan and the coupe were offered for the same price. In addition, the diesel versions were available with Airdream pack, which allowed for slightly reduced emissions and consumption.

The sedan version was introduced as Citroën C-Triomphe, a mid-size sedan automobile produced from 2006 for the Chinese market by Dongfeng Peugeot-Citroën Automobile, a joint venture between the France|French PSA Group (Peugeot-Citroën) and the Chinese manufacturer Dongfeng.

This new model range was designed to supplement other Chinese models, such as the Fukang and the Elysée, rather than being a direct replacement.

In April 2007, Citroën announced that the four-door C4 would be built in Argentina. The Argentinian and Brazilian versions are sold as the C4 Pallas in some South American and European markets.

The car is a notchback sedan version of the European C4 model, since the Chinese market prefers traditional three-box sedans over hatchbacks. It did not keep the designation, however, because in Chinese, the number "4" is unlucky. The sedan is much larger than the hatchback: its length is 4,770 mm (187.8 in) over the hatchback's 4,260 mm (167.7 in) and its wheelbase measures 2,710 mm (106.7 in) against 2,610 mm (102.8 in) of the hatchback. This caused the C-Triomphe sedan to be classified in the large family car class. The C-Triomphe has a number of unique features, such as an integrated air freshener, which allows the driver to choose the scent of the interior.

In 2009, the C-Triomphe was accompanied by the Citroën C-Quatrè, a smaller (length 4,588 mm (180.6 in), wheelbase 2,608 mm (102.7 in)), cheaper, and more fashionably styled sedan version of the C4. For 2012, Citroën planned a new facelift version of the C-Quatrè sedan to unveil at the Shanghai Motor Show based on the first generation of the European C4.

The C4 Picasso is the MPV version of the C4 range. It has been made available since 2006 in two versions: 5-seater C4 Picasso and 7-seater C4 Grand Picasso. The C4 Picasso received a facelift in 2010, with updated engine, headlights, and mechanics. The engine range is composed largely of the same version of the engine hatch and coupé, plus the petrol 1.8, and was also available in bi-fuel (natural gas or LPG) in many markets. 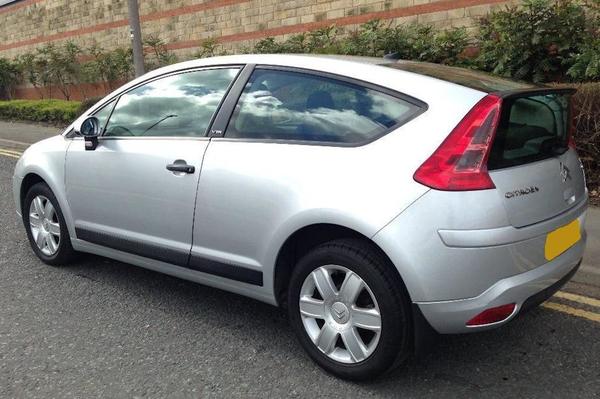