The Citroën LN (Hélène) and Citroën LNA (Hélèna) are supermini automobiles produced by the French manufacturer Citroën between 1976 and 1986. The added "A" used in the name of the bigger engined LNA stood for Athlétique (Athletic).

The LN was introduced in 1976. It combined the bodyshell of the Peugeot 104 Z (a shortened floorpan version of the 104) with the economical 602 cc two-cylinder gasoline engine of the Citroën 2CV. Equipment levels were low, but the LN's key selling points were its cheap price and low running costs.

There was evidence of defensiveness at the press launch, possibly because a car that looked like a Peugeot, but was assembled at a Citroën plant and fitted with a Citroën engine, sharply refuted assurances that the two marques would retain their individuality. Those assurances had been provided by the same press departments just a few months earlier, when Citroën had again run out of money and Peugeot had taken control. When pressed, Citroën explained that the LN project had been rushed through because of "the need to supply customers and the [dealership] network with a model to strengthen Citroën's position at the lower end of the market" which was hardly a ringing endorsement of a range which at the time included the Ami and the Dyane as well as the venerable 2CV which would continue in production long after any of the others. 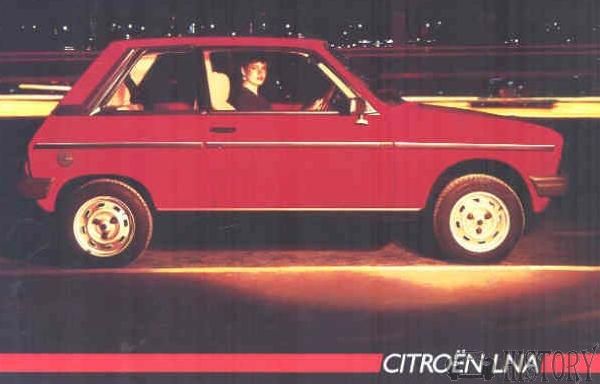 Citroën sold the LN in its native France only, but a more powerful replacement, the LNA, was introduced on 6th November 1978 and was exported to much of the rest of Europe (including right-hand drive versions for Great Britain). It had the more powerful and modern 652 cc two-cylinder engine of the Citroën Visa and later a 1.1 L four-cylinder engine was added which had a top speed of nearly 90 mph (145 km/h) on the LNA 11E and 11RE. But like the smaller-engined LN, the LNA was cheap to buy and cheap to run.

By 1980 the LNA could also be purchased, in France, badged as the "LNA Entreprise", with the back seat removed. This was effectively a function of taxation rules, whereby the 2-seater car could be sold with a reduced rate of Value-added tax (Europe's answer to American Sales tax), to the delight of budget conscious tradesfolk and sales representatives.

At the same time the LNA was launched, its Peugeot-sourced bodyshell also spawned the Talbot Samba which had square headlights and a different, slightly longer, rear body part. The mechanicals and a developed version of the full length 104 floorpan were used in the Citroën Visa that was also launched in 1978. LNA production ceased in the summer of 1986, while the Talbot Samba survived another year. The Peugeot 104 remained in production until 1988 even though its successor, the 205, had been launched five years earlier, as an entry level model in some markets. The Visa also lasted until 1988. The Visa based box van Citroën C15 version was the longest lasting 104 derivative, using 205 and 206 mechanicals it was made until 2005. 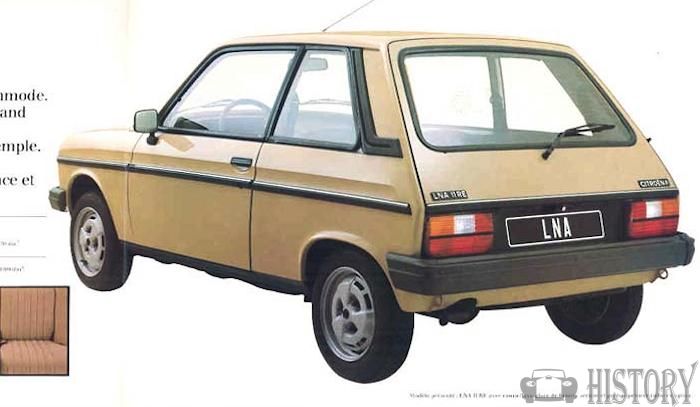