The Citroën Méhari is a light utility car and off-roader produced by the French automaker Citroën, a variant of the Citroën 2CV. 144,953 Méharis were built between the car's French launch in May 1968 and 1988 when production ceased. A méhari is a type of fast-running dromedary camel, which can be used for racing or transport. A méhariste was a French Armée d'Afrique and Army of the Levant cavalryman that used these camels.

The Méhari was based on the Citroën Dyane 6, and had a body made of ABS plastic with a soft-top. It also employed the 602 cc flat twin gasoline engine shared with the 2CV6 and Citroën Ami. This is similar to the way the mechanical parts of the 1960 Mini became the 1964 Mini Moke.

A four-wheel drive version of the Méhari was produced from 1980 to 1983 and had excellent off-road qualities, due to the lightness of the vehicle.

The standard Méhari weighs just 570 kg (1,260 lb) and has the interconnected fully independent long-travel 2CV suspension used by all of the Citroën 'A-Series' vehicles. For a full description of the suspension, see Citroën 2CV.

The Méhari was designed by French World War II fighter ace Count Roland de la Poype, who headed the French company - SEAP, Société d'Etudes et d'Applications des Plastiques. This company was already a supplier to Citroën, and SEAP developed a working concept of the car before presenting it to their client. 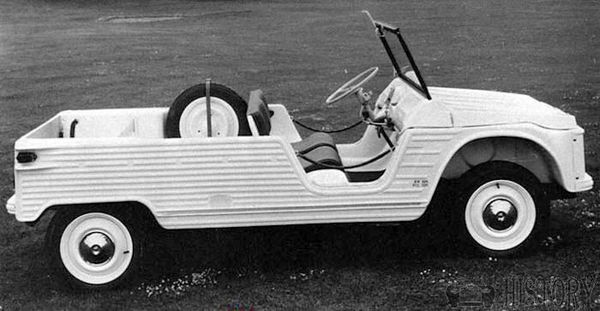 The French Army bought 7,064 Méharis - some were modified to have 24 V electric power.

The Citroën Méhari also was in service with the Irish Defence Forces and had a total of 12 machines purchased in the late 1970s, most were sold at auction about 1985, but one is retained at the DFTC in the Curragh Camp, County Kildare, Ireland.

In 1979, Citroën launched the "Mehari 4x4" with drive to all four wheels. Unlike the Citroën 2CV Sahara 4x4, this car has only one engine, rather than one engine per axle.

The body is distinguished by its spare wheel mounted on the specially designed bonnet, its additional bumpers, front and rear, its flared wheel arches (for 1982), big optional tires (for 1982) and its tail lights similar to the Citroën Acadiane van. The 4x4 version has a gearbox with 4 normal speeds and a 3 speed transfer gearbox for crossing slopes up to 60%. At the time, the Mehari 4x4 is one of the few 4x4s with four-wheel independent suspension. The car had all wheel disc brakes.

Mehari 4x4 production stopped in 1988 With only about 1,300 vehicles produced, the 4x4 is now highly sought after and transmission parts are virtually unobtainable.

The Méhari was sold in the United States in 1969 and 1970, where the vehicle was classified as a truck. As trucks had far more lenient National Highway Traffic Safety Administration safety standards than passenger cars in the US, the Méhari did not have seat belts. The Mehari did have limited sales success. Budget Rent-A-Car bought a number of them and offered them as rentals in Hawaii. Hearst Castle, in San Simeon California, used them as groundskeeper cars.

Distinctions for the US-model included:

The Mehari sold in Argentina had a fibreglass body and not ABS. The car was produced in Uruguay from 1971 to 1979. After Citroën left Argentina following the collapse of the economy in the late 1970s, the production of the Mehari, renamed the "Mehari Ranger" with flared wheel arches and big tires, continued for some time.

Paris was terrorized during the autumn-winter 1973/1974, when sixty-three Citroën Méhari were burned by an arsonist.The Méhari made several film appearances. In the 1971 film The Omega Man, Charlton Heston drives a green Méhari. In Hawaii, Brian Keith drives a Méhari in The Brian Keith Show, which ran from 1972 to 1974. In 1973's Aloha from Hawaii Via Satellite TV Special with Elvis Presley, a yellow Méhari can be seen prominently (at the 18 minute mark) during the Early Morning Rain song. Bill Murray also drives a Méhari in 2004's The Life Aquatic with Steve Zissou. 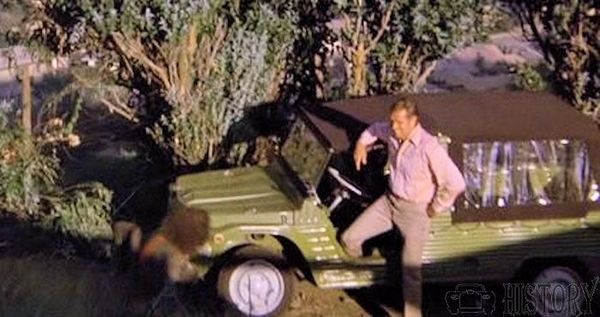 Citroën Méhari in the film The Omega Man from 1971

The colour was integrated into the ABS plastic material in production, and as a utilitarian vehicle, the options chart was quite limited. Only the Vert Montana remained in the catalogue for all the 18 years of production. Except for Azur blue, the official names of colours all refer to desert regions.

Ultraviolet rays from the Sun impact the colorfastness of ABS plastic, so unrestored cars have a faded appearance.

New bodies for restorations are only supplied in white colour, and now require painting on top of a specialist primer.

The Mehari ended production in 1988 with no replacement. This left a gap in the market, that others have tried to address.

The Teihol company, which had been building the recently defunct Renault Rodeo, created the Tangara using 2CV mechanicals, with bolt on pre-dyed GRP panels. They also created a Citroën AX-based model, but the company ceased operations in 1990.

The mechanically simple Méhari can be restored to ‘as new’ condition – all parts including the chassis are available, creating a thriving restoration market.