The Citroën CX is an automobile produced by the French automaker Citroën from 1974 to 1991. Citroën sold nearly 1.2 million CXs during its 16 years of production. The CX was voted European Car of the Year in 1975. The name CX is the French equivalent abbreviation of Cd for drag coefficient in English, drawing attention to the cars aerodynamic styling, which was uncommon in 1974.

It is considered by some enthusiasts as the last "real Citroën" before Peugeot took control of the company in 1976.

The CX was initially a huge success in Europe, more than 132,000 being produced in 1978. It found customers beyond the loyal Citroën DS customer base and brought the technology of the advanced, but somewhat impractical, Citroën SM to the masses. Unlike its principal competitors, the CX did not have worldwide distribution—the cost of development and improvements had to be met from a geographically small sales base.

The CX's flowing lines and sharp Kamm tail were designed by auto stylist Robert Opron, drawing upon its precursor DS. Mechanically, the car was one of the most modern of its time, combining Citroën's unique hydro-pneumatic integral self-leveling suspension, speed-adjustable DIRAVI power steering (first introduced on the Citroën SM), and a unique interior design that did away with steering column stalks, allowing the driver to reach all controls with his or her hands on the steering wheel. The suspension was attached to sub frames that were fitted to the body through flexible mountings, to improve even more the ride quality and to reduce road noise. The British magazine Car described the sensation of driving a CX as hovering over road irregularities, much like a ship traversing above the ocean floor. This suspension was used under license by Rolls-Royce on the Silver Shadow and its derivatives, and the Mercedes-Benz 450SEL 6.9.

The CX was a transverse engine design, in contrast to the longitudinal mid-engine layout of the Traction Avant and DS. This saved space; the CX was 8 in (20 cm) shorter than the DS. The CX fastback had insufficient rear legroom to function as a chauffeur driven limousine (a common use for the spacious DS model), so in 1976, Citroën introduced a 10 in (25 cm) longer version, the "Prestige" variant, which used the wheelbase of the longer Safari/Familiale estate. The Prestige offered more rear legroom than any other standard-sized sedan in the world. In 1977, it also gained a raised roofline to improve comfort further. Contemporary reviews of the Prestige were favourable. In 1976 the UK's Driver and Motorist praised its comfort and interior fitments.

At launch in 1974, the CX was rushed to market, but with some teething troubles. Some very early models did not have power steering and proved difficult to drive.

Originally, the CX was developed as a rotary-engined car—with several consequences. The CX engine bay is small because rotary engines are compact, but the Comotor three-rotor rotary engine was not economical and the entire rotary project was scrapped the year the CX was introduced, The production version was left powered by the same modest inline 4 cylinder engine found in the DS. At launch there was a choice between three differently powered versions. The "Normale" CX car came with a 1985cc version of the four cylinder engine from the predecessor model with a claimed maximum output of 102 hp (76 kW), which was slightly more than had been available from the engine when fitted in the DS The "Economique" version of the car (reflecting the continuing impact of the 1973 oil price shock) came with the same engine as the "Normale", but the gear ratios were changed, along with the final drive ratio, giving rise to a 7 km/h (4 mph) reduction in top speed in return for usefully improved fuel economy. More performance came from the "CX 2200", fitted with a 2175 cc version of the engine and a twin carburetor, resulting in a claimed maximum output of 112 hp (84 kW).

Contemporary reports also indicated that the cost of setting up a new production facility for the CX, on the northern edge of the Paris conurbation, at Aulnay-sous-Bois, played a central part in undermining the company's finances to the point where it was obliged to surrender its independence to the more financially cautious Peugeot company. On July 12, 2012, PSA announced that it is permanently closing the Aulnay-sous-Bois plant.

The CX was very slowly developed and improved, the key elements it needed to compete successfully in its market segment taking many years to emerge.

The parent company, PSA Peugeot Citroën, was fielding three cars in the executive car segment, the slow selling Peugeot 604, the abortive Talbot Tagora and the CX, all competing for PSA's scarce financial resources. Developing and exploiting the CX design was not the top priority. The seeds of PSA's competitive retreat from this traditionally important segment were sown during this period of diffused efforts.

In 1981, factory rustproofing and a fully automatic transmission were added.

The CX eventually acquired a reputation for high running costs, which over time cut sales. Ironically, it was the components standard to any automobile (steel, door hinges, starter motors, electrical connections, etc.) that proved troublesome in service, not the advanced components. The quality of construction improved too slowly to eliminate this perception.

The 1983 turbo-powered 2.5 L diesel engine did make the CX Turbo-D 2.5 the fastest diesel sedan in the world, able to reach speeds up to 195 km/h (121 mph). (Diesels account for more than half the market for executive cars in France.)

Finally, in 1984, the GTi Turbo gasoline model, with a top speed of over 220 km/h (137 mph), gave the CX the powerful engine that finally used the full capabilities of the chassis. Unfortunately fuel economy was poor, and only improved slightly with the 1986 Turbo 2 model.

Although the minor 1985 Series 2 changes did create initial interest from press and public alike, they did little to revive sales, with 35,000 units being produced in 1986 and 1987.

While the revolutionary and timeless DS achieved its greatest sales success at the same point in its 20-year lifecyclethe CX design was subject to more intense competitive pressures from other automakers, who succeeded in using the CX design as a template for improvement. In particular, the Audi 100 introduced an aerodynamically restyled variant in 1983.

Common parts from the CX were used in other more exclusive cars. For instance, the rear view mirrors of the "Series 2" CX were found on many - mostly British - sports cars, like the Lotus Esprit, the Jaguar XJ220, the TVR Chimera and the (French) MVS Venturi.

The Break estate ("Safari" in the United Kingdom), produced from 1975 until 1991 was joined by the seven-seat Familiale, both, with increased load capacity (baggage; equipment; passengers), taking full advantage of the CX's self-levelling suspension.

Both petrol and diesel-powered models were available in various engine sizes including turbocharged versions. The top-end sports model, alongside the CX Prestige luxury model, was the CX 25 GTi Turbo, launched in autumn 1984, rated at 168 hp (122 kW) and a top-speed of 220 km/h (137 mph).

The Series 1 vehicles (1974–85) were characterised by stainless steel front and rear bumpers, hydropneumatic suspension as compliant and soft as the DS, a "spaceship" style dashboard featuring a revolving drum speedometer and similar tachometer, and a "stalk-free" layout where turn signals, wiper controls, horn and headlights could be operated by the driver's fingertips while his/her hands remained on the steering wheel.

In July 1985, the styling was revised, and became known as the Series 2. The cars lost some of their earlier distinctiveness. The suspension became stiffer in most models. Plastic bumpers were the most notable exterior change, giving what some say is a more aggressive look, as opposed to the more elegant Series 1 design. Although the dashboard retained the "pod" housing for the instrumentation, it lost the revolving-drum instruments and received a sloping centre dash area, and the radio moved to a position sideways and between the front seats, with the height corrector and heating controls moving to the centre console. 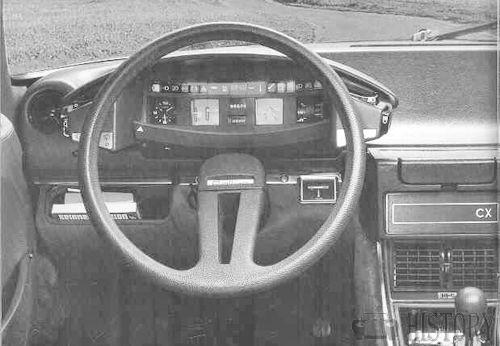 A Citroën design principle was that turning signals should not cancel themselves — this should be a conscious decision of the driver. The CX perpetuated this feature, which is not shared by virtually any other contemporary automobile, limiting the CX's potential use as a rental car.

The CX was frequently used as an ambulance and camera car, applications where the cosseting suspension was especially valuable. A number of CX estates were elongated and retrofitted with a second rear axle, mostly used for high speed bulk transport such as carrying newspapers across Europe. They are known as the "loadrunner" variant. Most of them were prepared by the French company Tissier.

The last CX was the venerable Safari Estate, to this day one of the largest, and because of its suspension, most practical, family cars available in Europe. The Safari was very popular with speedway riders and other motorcycle racers, as the capacious design meant a bike could easily fit in the back.

The most collectible CX models are the very rare Series 1 GTi Turbo, and the Series 2 Prestige Turbo.

The CX Prestige model was used by the French government, including former president Jacques Chirac. It was the official car of DDR head of state Erich Honecker, who ordered several extended versions for official use.

Harald V, King of Norway, had a CX in the 70s. The Norwegian government used it in the 80s, as did Panamanian dictator Manuel Noriega. Henri, Grand Duke of Luxembourg, had a special Landaulet created by Henri Chapron for his 1981 wedding.

The singer Grace Jones sported a haircut shaped like a CX in a prominent series of advertisements for the GTi Turbo in 1985, and included the CX prominently in her 1985 music video "Slave to the Rhythm".

The character Jasper Palmer, played by Michael Caine in the movie Children of Men, drove a vehicle based on a CX Safari. This fitted in with the director's vision of vehicles being futuristic designs based on familiar cars but with an unfamiliar disguise. Similar avant garde vehicles such as the Fiat Multipla and Renault Avantime were also used.

During the Summer 2010 season, popular BBC motoring show Top Gear hosted a challenge to its presenters to build a caravan out of an ordinary vehicle, whereupon Jeremy Clarkson built a three-storey house out of a 1988 Citroën CX Break.