The Fiat and the Lancia were slightly wider than PSA vans, and the Phedra is also longer than other Eurovans.

To highlight the launch of the V6 engine, Peugeot presented a design study called Peugeot 807 Grand Tourisme at the 2003 Geneva Motor Show. Apart from the fancier 4-passenger interior and some mechanical and visual tuning, the car was essentially a top-of-the-line 807 in a purple colour.

The engine range comprised again of different versions of the PSA EW/DW engine, paired with either 5-speed manual or 4-speed automatic transmissions. (A six-speed manual option was added in the UK in late 2004). Additionally, top-of-the-line versions came with the PSA ES V6.

All diesels were PSA's HDIs, but billed JTD by Fiat as well.

Citroën chose to put the minivan in line with its new naming theme, where models were called Cx (x being a number roughly corresponding to the relative size of a given model), hence the Citroën C8.

The C8 has now been axed in Europe,and the function as Eurovan has been divided between the Citroën Grand C4 Picasso and the new Citroën DS5. 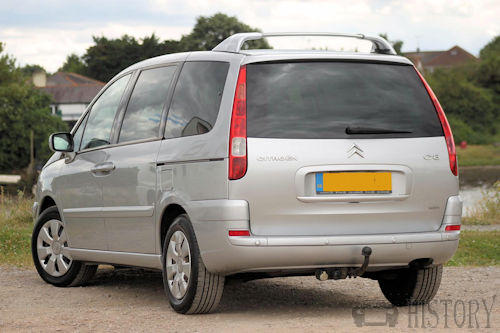