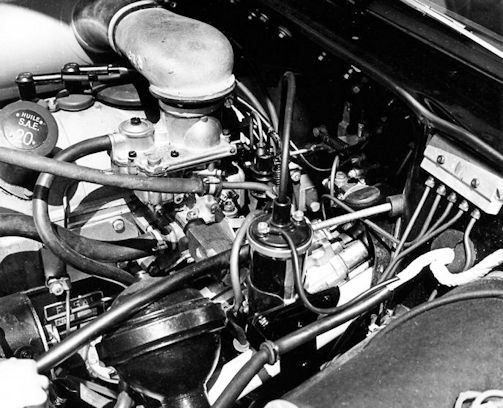 The D-series engine developed and produced by Citroën from 1955 to 1976. It is a four-stroke petrol internal combustion automobile engine with four lined in-line cylinders, cast iron block, water-cooled, fitted with a three-then five-bearing crankshaft, with lateral camshaft (with rocker arms), controlled by a timing chain , with an aluminum cylinder head , eight overhead valves,as fitted to the Citroën DS and ID.

The D series engine is derived from the engine that fitted the 11 HP version of the Citroën Traction. This engine was indeed retained much of its construction characteristics. The direction of rotation of this motor is anti-clockwise (distribution side). The 6-cylinder flat originally planned required an extension of time that the brand could not afford.

During 1954, the engineers therefore began a series of modifications on the old 1.9 liter block and thus gave birth to the range of D series engines. Deeply revised for the 1966 vintage (September 1965), it is again revised to become the  M-series engine  for the CX. The latter constitutes the ultimate development with, in particular, diesel variants .

All the engines of the DS and ID of this first generation feature a 3-bearing crankshaft and bore and stroke dimensions of 78 and 100  mm respectively , identical to the engines of the Traction Avant 11 hp. They do, however, have differences due to constant changes.

The different versions fitted to the DS 19 are:

The different versions fitted to the ID 19-6 are:

The different versions fitted to the ID 19 sedan and convertible are:

Introduced in 1965, the 2.0 liter offers significant improvements: first, the cylinders are very different from a dimensional point of view, furthermore the bore and stroke have been increased to 86 and 85.5  mm . This results in an increase in displacement which reaches 1 985  cm 3 . The major change is the crankshaft with five bearings, instead of three. The ignition became single coil and the circuit breaker, while in 1.9 was double coil and breaker. Initially, the 300 W dynamo  (520  Wreplaced by an alternator since 1967). A 24/30 double-barrel carburetor is adopted, already fitted in 1.9 more efficient. Six variations exist. Three of them, marked with the letters DY, found application on both DS models, the two identity models, is still on station wagon models (often seen as a hybrid between the first two, but with the bodywork family). The other three options are marked with the letters DV and have only been fitted to ID models:

Commercially named 2.1  liters, it is actually a 2.2  liters. This engine is introduced in October 1965, and was born from reboring of the 2 liters. Here, the cylinder bore is reduced from 86 to 90  mm , while the stroke remains unchanged. The result is an increased displacement to 2175  cm 3 . This engine was born with a carburetor, was then developed and offered with electronic injection. The ignition was initially entrusted to a 12 volt electrical system with a 400 W alternator  . In 1967, the generator proceeds to 520  W . This engine came in three variations, which are briefly described below:

The 2.3  liter version was introduced inAugust 1972, replacing the 2.1  liter. It was born by the continuation of the reboring of the cylinders which passes from 90 to 93.5  mm , while the stroke again remains unchanged. This gives a displacement of 2,347  cm 3 , available in two variants, one with carburetor and the other with electronic injection. This is the biggest evolution of the D-series engine. Both variants ceased to be produced inMay 1975. Among other things, the history of this version does not end with the end of the D-Series engine, but will continue for a few years under the name of  M23 engine , which in practice with some modifications and updates will be mounted on the replacement for the Citroën DS, namely the Citroën CX . 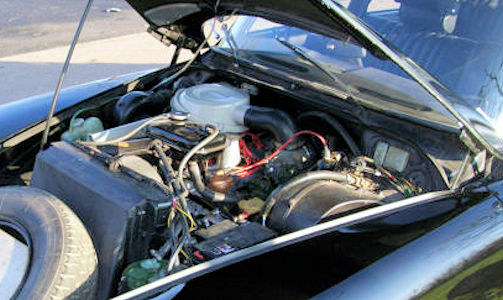