The Cisitalia D46 is a racing car produced by Cisitalia .

Designed by Dante Giacosa and Giovanni Savonuzzi commissioned by Piero Dusio , then president of Juventus Football Club and industrial. Giacosa came into contact with Dusio thanks to Mr. Casalis at the end of 1944, a trusted man of the industrialist from Turin, who was in charge of the commissioned body shops at Cisitalia , at that time mechanical workshop located in Corso Peschiera which mainly dealt with the production of Beltrame bicycles .

Giacosa, continuing to work for FIAT , took care of the design of the car during free time. To facilitate the task, Dusio offered him to stay in his villa in Corso Galileo Ferraris , abandoned by him and his family after a bombing but fully habitable. The project was thus developed with the help of the designer Edoardo Grosso, not without difficulties related to the war. Giacosa recalls that the first 1: 5 scale model in plasticine was destroyed by a German police patrol looking for Dusio. The designer also actively contributed to the construction and development of the first prototype.

On the second floor of the Villa, in just over 8 months Giacosa designed a revolutionary project for the time, probably inventing the tubular lattice frame, with very low production costs, as based on mechanics derived from the Fiat 500 "Topolino" and from 508B / 1100. Giacosa claims that the brilliant intuition of the tubular frame was given to him by the skills of the workers used to welding steel tubes for the production of bicycles. The body was a simple aluminum sheet, modeled for the prototype by the coachbuilder Motto and Giacosa himself. Peculiar are the fairings of the front suspensions that Giacosa himself defines as "aesthetic coquetry" insofar as it is suitable for the mere masking of the suspension organs, "neither useful nor practical for running".

The brakes and the engine block was in fact of 1100, while the semi-independent quadrilateral front suspension of the 500. The rear suspension was affected by the studies made during the war in Fiat: coil springs placed between the frame and two longitudinal half-leaf springs (one on the side, fixed to the frame with a spherical joint each) that supported the bridge, while in the middle a triangle connected bridge and frame, with the addition of a helical spring and a spherical joint on the frame crossed by a pin, so the rigidity of the suspension could vary depending on the height of the bridge and the two half-leaf springs served as an anti-roll element.

The engine had undergone considerable processing, so as to bring the power from 32 hp to 62 hp at 5,500 rpm, coming to a compression ratio of 9.5: 1, impressive for the time. It had been placed in a longitudinal position at the front, along with the gearbox and the radiator. The gearbox, the result of another study carried out in Fiat during the war, was a three-speed reverse gear, without lever, with automatic centrifugal clutch actuated by a pedal, which in the first part detached the clutch and in the second inserted the ratio. With this system the gearshift was very precise and fast: it was enough to push the pedal (normally intended as a "clutch") for the clutch, press again to move into the second and from here on each pressure of the pedal allowed to change between second and third. In order to be able to go back to first, once in second, the selector switch on the steering wheel had to be changed between first and reverse to reverse, and press the clutch. The traction was rear, as usual at the time.

The steering wheel was the same as Mickey Mouse. Being the pilot's cell just 45 cm wide and at the same time the considerable diameter of the steering wheel, Giacosa made it foldable with a mechanism that allowed a quick escape in case of emergency.

The car was brought into the race with considerable success by several drivers who were confronted with more powerful but older cars.

The sporting debut of Cisitalia is dated at the end of August 1946, with the Coppa Brezzi, one morning at the Parco del Valentino , set up for the occasion at the city circuit. It was the first closed circuit race in Italy after the second world war.

7 small Cisitalia showed up at the start, competing against 26 other cars, whose 3 specially brought from Paris by Amedeo Gordini . Among the Cisitalia D46 drivers there was Tazio Nuvolari , who, not having blocked the steering wheel of his car at the time of departure, after having surpassed all the opponents and having made some curve with his usual violence, the steering wheel broke away from the column. The pilot continued the race clinging to the column but after a few laps he was forced to retire.

It was however a triumph, with the same Piero Dusio to win the cup followed by two other D46 driven by Franco Cortese and Louis Chiron . 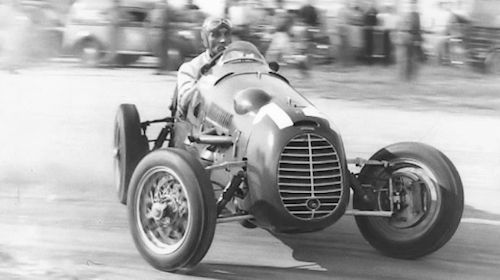 Using Fiat parts as a base Dante Giacosa designed the D46 which made its successful debut in 1946. Giacosa had a vast knowledge of Fiat bits and pieces as he had designed the legendary 500 Fiat Topolino before WWII. The engine and suspension were directly derived from the small Fiat but extensively modified for racing. The engine received dry sump lubrication and further tweaks considerably increased the power output to 60-70 bhp. With a spaceframe chassis and weighing under 400 kg (880 lb) the available power was more than enough for competitive performance. Dusio's dream of a one model series came to nothing, but instead his D46s started to dominate the voiturette series. Highly talented drivers like Tazio Nuvolari piloted the D46 to multiple successes against more advanced but older racing cars.

This successes led to a much more ambitious single seater project that would prove too much for the small company. Ferdinand Porsche was commissioned to design and construct a full Grand Prix car which led to the innovative but complex Cisitalia 360. With a mid engined layout and four wheel drive the Type 360 was far too expensive for Dusio to support and the attempt essentially killed any further racing cars.