The term Chevrolet Monza drew on the Chevrolet Corvair Monza, which had popularized in the early sixties, the concept of sporty compact car in the US and can be considered a precursor to the Pony Car , a vehicle class of compact sports coupes, its first and long leader of the Ford Mustang.

Model year 1975: Introduction of the Monza as a three-door hatchback sports coupe ( Monza 2 + 2 ) with rear-wheel drive. The roof line of the body recalled the Ferrari 365 GTC / 4 , the lines were very European, up to the beveled front (polyurethane) in the manner of simultaneously Opel manta B . The drive initially took over either a 2.3-liter four-cylinder with dual carburetor (51 kW / 70 hp) or V8 units with 4.3 liters (81 kW / 110 hp) or 5.7 liters of displacement. Four- or five-speed manual or three-speed automatic. Spring 1975: Introduction of an additional notchback coupe (model name Towne Coupe) with conventional front end.

1976: Towne Coupe available on request also with the front end of the 2 + 2 available, as well as a luxury version with "Cabriolet" package, the vinyl roof, Chromzierrat and such included. Introducing the Monza Spyder as a sports version of flow and notchback model with sports suspension and sophisticated equipment with all engines. Five-liter V8 (103 kW / 140 hp) replaces the 5.7-liter.

1977: elimination of the 4.3-liter engine. Two new Spyder packages were on offer (only for the 2 + 2), once a pure optical package with trim and spoilers, on the other hand as a performance package, were included in the sports suspension, among other things. In the spring of 1977 debuted the limited special edition Monza Mirage, also with sportive presentation and features.

1978 was a reorganization of the model program with the Monza S as a base model with conventional front end as hatchback coupe and notchback and tailgate coupe and station wagon (assuming the corresponding variants of the adjusted Chevrolet Vega ), to Monza Sport (with plastic snout) as a step and 2 + 2 coupé. The engine range was also changed. the vulnerable aluminum 2.3-liter replaced a cast-iron 2.5-liter four-cylinder (85 hp), also there was a new 3.2-liter V6 with twin carburetor (66 kW / 90 hp) and the well-known on 107 kW (145 hp) strengthened five-liter.

1980: Elimination of the 3.2-liter and the eight-cylinder. Monza Spyder with modified, but still very eye-catching trim. The four-cylinder now produces 63 kW (86 hp), the V6 81 kW.

Overall, created by the Chevrolet Monza around 700,000 copies; ironically, after its most successful year (169,000 units), the model dropped out of the range to make way for the Chevrolet Cavalier , which sold just 190,000 times in its first, extra-long model year, despite its being a complete model family (sedan, coupe, estate) gave. 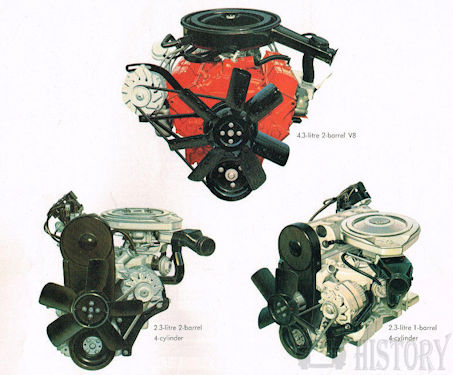