Chevrolet Camaro fifth generation is a sports car of the US car manufacturer Chevrolet , which belongs to the General Motors Group (GM). According to Chevrolet, the name "Camaro" derives from the French word camarade , which translates to "comrade" or "friend".In August 2002, the production of the fourth generation was discontinued due to steadily falling sales figures.Only after a break of almost seven years did GM resume production of the fifth-generation series in the spring of 2009. .

The fifth Camaro is based on a concept model shown at the 2006 Detroit Motor Show .The design is based on the first generation. The development of the vehicle took place at the GM subsidiary Holden in Australia, the car was produced in the Oshawa Car Assembly in Oshawa, Canada .

The concept vehicle was equipped with a 294 kW (400 hp) and six-liter V8 engine of the Corvette and had a cylinder shutdown to reduce fuel consumption.The mass production of the coupe was launched on March 16th 2009,  which the convertible in the spring of 2011

The basis of the vehicle is the new Zeta-light - platform , which shared the Camaro with other Hecktrieblern at Buick, Chevrolet and Holden. There were six engines available:

Both V8s have one central camshaft and two valves per cylinder.

The tank capacity is 72 liters.

For the first time, the Camaro receives independent suspension and disc brakes on all four wheels, six airbags, a speed-sensitive power steering , ESP and traction control . The V8 engine with the engine code L99 also has a cylinder deactivation (called Active Fuel Management ) to reduce fuel consumption.Depending on the engine and equipment, the base price of the vehicle was between about 25,000 and 72,000 US dollars.

In 2010, a special model Camaro Transformers Special Edition was launched in cooperation with toy manufacturer Hasbro . It was available as Camaro LT or SS with the usual drive combinations. The color was Rally Yellow with black accents and corresponding logos.

For Europe, a slightly modified version of the 2012 model year was offered. The equipment was based on the SS version with the V8 engine LS3 (318 kW / 432 hp) or L99 (298 kW / 405 hp), RS package and other features such as reversing camera with display in the interior mirror, larger side mirrors with integrated turn signals and redesigned taillights with LED light in the design of a pair of sunglasses. The inscriptions "SS" outside and inside as a designation of designation accounted for the historical background of this abbreviation in the EU models.

In September 2013, the revised Camaro was presented at the Frankfurt Motor Show. While he had been in the US since the middle of the same year, the sale began in Europe in January 2014.The front end was redesigned, the lower air intake was a bit higher and wider. The grille came to compensate a little narrower. At the rear, the split taillights were replaced by horizontal, modified the trunk lid and integrated another diffuser. The daytime running lights have LED technology and are located in the main headlight and there are fog lights.In addition, a new Camaro Z / 28 was presented. The somewhat weaker (377 kW / 513 hp) but lighter at -130 kg.

With the ZL1 2011 was in February  at the Chicago Auto Show a new top model. This was initially available from the spring of 2012 only as a coupe, but after the model year change then followed the convertible. With a maximum power of 432 kW (587 hp), it is the strongest ever Camaro and at the same time it was until the release of the Corvette C7 Z06 Cabriolet in 2015, the hitherto strongest convertible from Chevrolet. Many parts of the ZL1 have been designed specifically for this vehicle, such as the new version of the Magnetic Ride suspension. The ZL1 reached a time of 7: 41.27 minutes at the Nürburgring.

The Camaro has been prominently placed in all previous parts of the blockbuster Transformers series . In the first part of 2007, a Z / 28 of 1977, and a replica of the Camaro Concept 2009 used. The latter was created by Saleen in collaboration with GM. For the fiberglass body, the original forms of the concept car were used. The chassis was taken over by a Pontiac GTO and adapted. Most attachments including the "aluminum" wheels were dummies made of fiberglass.

In Transformers 2 - The Revenge of 2009, a prototype or pre-production model of the not yet available for sale Camaro Z28 was used. In Transformers 3 (2011), "Bumblebee" anticipated elements of the upcoming ZL1, and Transformers: era of doom (2014) used a concept car .

In 2013, in the movie The Last Stand , Arnold Schwarzenegger competes in a Camaro ZL1 against the villain who races with a tuned Corvette ZR1 to Mexico. Both vehicles are largely disassembled in a corn field. 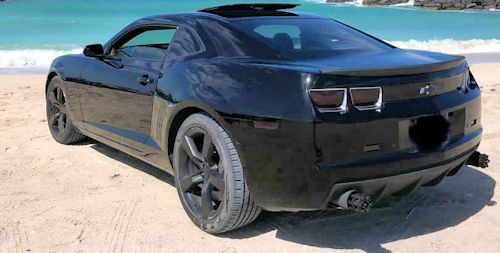