The Chevrolet Camaro second generation appeared in the summer of 1970 (so-called model year 1970 1/2) and had an elegant, almost European-looking body, which stylistically quoted some older Ferrari Berlinetta models. Characteristic here were above all the round tail lights that came from the Corvette. As a classic coupe, the 70 1/2 Camaro was built without a B-pillar and with very large doors.

The dashboard contained six circular instruments including an electric clock and an oversized fuel gauge. The standard models were initially equipped with a continuous front bumper and below the main headlights mounted rectangular lamps. The fuel filler neck hid itself here behind the hinged license plate in the rear. The gear indicator of the automatic versions was mounted between the two large round instruments in the dashboard. Like the whole body, the interior was airy, elegant and European.

The new Camaro was only in coupe form; A convertible should not be available until the mid-eighties. The drive technology was largely taken over by the predecessor, with the exception of the 3.8-liter inline six-cylinder engine (230 cui); The base engine was now a 4.1-liter straight-six engine with 155 gross SAE PS. The strongest machine was the 6.5-liter V8 engine (396 cui) with 375 gross SAE PS. This was actually a 6.6-liter engine (402 cui), but Chevrolet held on to the already classic name "396". On early datasheets, the 7.4-liter engine (454 cui) appeared in two power levels, but it was installed in the series only in a few isolated cases. In addition to the basic model Chevrolet offered the "Rally Sport" with a modified grille and two-piece front bumper, also the Super Sport package and the Z / 28 with 360 gross SAE-PS strong 5.7-liter engine (350 cui) instead of the previously used five-liter engine (302 cui). The standard model was front equipped with disc brakes and rear with drum brakes.

The Camaro of the 1972 model year had a hard time. Initially, production in Ohio was cut short by a 174-day strike, and later 1100 Camaro had to be scrapped for failing to comply with new safety regulations for bumpers. Parts of the GM management would have liked the production of Camaro and Pontiac Firebird hired, while other managers were convinced that the cars had a future. The proponents of an extension of time finally prevailed and Chevrolet produced in model year 1972 still 68,656 copies of the Camaro, including 970 of the SS396, for which it should be the last year. In the top model, the spelling officially changed from Z / 28 to Z28.

New in model year 1973 were the equipment level LT and the shock absorbing bumpers. The Super Sport was gone and the 6.5-liter engine (396 cui) was eliminated. Because of the stricter exhaust laws, the compression ratios of all engines were lowered, the power dropped accordingly. The strongest engine was now a 5.7-liter engine from the Corvette (engine capacity 350 cui, engine type LT1) with 245 net SAE-PS (248 DIN-PS).

The Camaro of the model year 1974 grew due to the new aluminum bumpers and the new sloping front of the vehicle by almost 20 centimeters. The four round taillights gave way laterally pulled around new units.

In 1975 and 1976, there was no Z28 and performance levels continued to decline. The two 5.7-liter V8 engine now only made 145 net horsepower and 155 net horsepower. The net benefits were still taken off the crankshaft, but now with installed ancillaries, exhaust gas detoxification systems and standard exhaust - all this had been omitted in the gross SAE standard. The hallmark of the Camaro of the 1975 model year was the enlarged rear window. 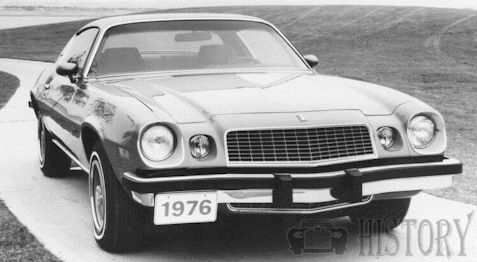 The Z28 was reintroduced in the spring of 1977 and was an instant bestseller; Most customers now order their vehicles with air conditioning and automatic transmission. If you were less interested in comfort and more sporty, you could also opt for a "bare" Z28 with four-speed gearbox from BorgWarner (Super T-10). The resurrected Z28 was one of the few US performance cars of the time. In the acceleration, he barely succumbed to the muscle cars of the sixties and the excellent GT suspension offered - especially the experienced motorist - excellent handling. Many Z28 were ordered as driving machines and drove so many Pontiac Trans Am or so many Chevrolet Corvette the third generation on the highway or on winding terrain on and off. 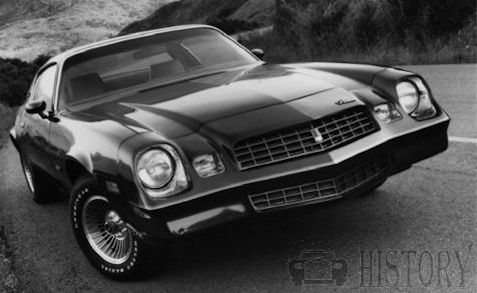 For the 1979 model year, the Camaro received revised front and rear sections and much larger rear lights. Under the front bumper now sat a front spoiler. Also new was the optionally available T-top roof with two removable inserts made of tinted glass; also a sunroof was in the price list.

The old 4.1-liter straight-six lost a modern 3.8-liter V6 engine (229 cui). On the bonnet of the Z28 now sat a rear open scoop, the flap opened at full throttle via a magnetic switch; This gave the engine cold fresh air. This technology called ram-airprovides a performance boosting effect.

In the spring of 1982, the third generation of the Camaro came on the market.

The Camaro in the movies

The Camaro has been prominently placed in all previous parts of the blockbuster Transformer movie of 2007, a Z28 from 1977 was used.