The third-generation Camaro came in 1982 and lasted for 10 years, growing in power during that period and having many of the traits which made the
Camaro popular from its launch in 1967. As always, the Z28 was the performance option, and in 1992, the 25th anniversary of the model, the car got a Heritage appearance package in either red, white or black,With rally stripes.  and continued the use of bolt-on spoilers and side skirt to modernize its appearance.

The live rear axle had a limited-slip differential and 3.42:1 gears, and was located on longitudinal links plus a Panhard rod for improved cornering. The 305ci (5-litre) V8 had electronic Tuned Port fuel injection with an individual runner for each cylinder, and Chevrolet made the car into more of a driver's machine by fitting a 5-speed manual gearbox as standard.Production cars could do 14-second quarter-miles. ".

The standard engine of the Camaro were large-volume V8 engines over 200 hp (about 150 kW). Also offered in-line six-cylinder engines, later V6 engines, in the 1980s, even four-cylinder in-line engines, were considered "savings versions".

In the spring of 1982, the third generation of the Camaro came on the market. These were the first models with injection , four-speed automatic transmission (instead of the previous three-speed automatic transmission), five-speed manual transmission (the four-speed manual remained in 1982 and some models of the years 1983/1984 series), 14- and 15-inch wheels , Tailgate and even a basic four-cylinder engine (as a result of the second oil crisis of 1979). The Camaro Z28 was voted Motor of the Year 1982 by the magazine Motor Trend . The third-generation Camaro had, according to general consensus, a better and curving chassis.

All Z28 engines with central injectors had lightweight engine hoods with functional air intakes. General features of the Z28 were a modified front, a three-piece rear spoiler and front spoiler and sill and rear aprons in gold or silver. Above it was a bicoloured decorative strip. As standard also five-spoke aluminum wheels in the size 7J × 15 with silver or gold accents. Rear right on the bumper and on the sill aprons were Z28 emblems.

As just introduced completely new model of the Camaro remained in model year 1983 largely unchanged, but there was an important innovation in the engines: the considered vulnerable 165-horsepower five-liter V8 engine gave way shortly after the start of the model year, the new L69 five-liter Engine with quadruple carburetor and 190 hp (193 DIN PS), which the Camaro could better offer the arch rival Mustang.

Only 3223 copies of the L69 were made in the model year 1983, which makes it quite rare today. The basic Camaro and the Berlinetta were continued unchanged, with the exception of new paint colors. 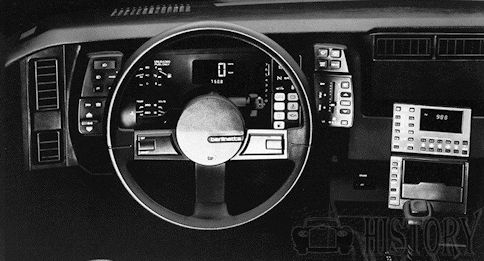 The dashboard criticized for its build quality and appearance has been redesigned. The Berlinetta featured digital gauges as standard, as well as an overhead console and control satellites with switches for turn signals, cruise control, air conditioning, windscreen wipers and headlights.

The HO engine (L69) in the Z28 was now also available with automatic transmission.

In the 1985 model year, there was a lot of news - Chevrolet launched a new Camaro model, the famous IROC-Z , so named after the popular race series International Race of Champions . This had improved landing gear, trim and the tuned port injection of the Corvette engine, as well as new 16-inch five-spoke wheels and tires in size 245 / 50ZR16. For now, only the five-liter engine received the TPI injection; the 5.7-liter engine type L98 was only in the spring of 1986 and only with the 700R4 automatic transmission, to only in IROC-Z with 215 hp (218 DIN-PS) - in the normal Z28, the machine did not exist.

All vehicles of the model year 1985 received a modified front end with lower-reaching front aprons and front spoilers on the Z28 and the new IROC-Z. Instead of the special speedometer with double indicator needle for km / h and miles per hour now ordinary, up to 85 miles per hour reaching tachographs with a needle were used. The 2.8-liter V6 received an injection system , which increased its performance from 112 hp to 135 hp (114 DIN PS and 137 DIN PS). The rarely sold four-cylinder engine of the base model was discontinued after this year.

The Camaro received a (now legally required) third brake light. Only in the model year 1986, this sat on all models (base, Z28 and IROC-Z) on the rear window; later it was integrated in the rear spoiler. The five-liter engine with quad carburetor (L69) was the last time, the 2.8-liter V6 engine was standard in the base model - the four-cylinder engine was no longer. In the IROC-Z, the TPI five-liter engine delivered 190 hp instead of 215 (218 or 193 DIN hp). Chevrolet reportedly built a 1000 Camaro with the 5.7-liter V8 engine with Tuned Port Injection (TPI) d. H. a multipoint injection , but without air conditioning and it was not widely available. 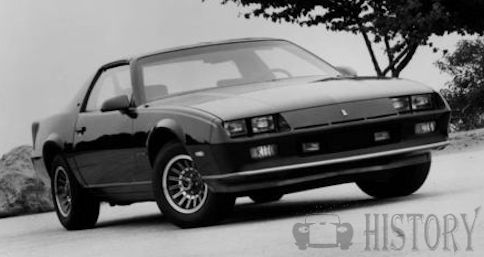 After a long trial period, the IROC-Z now has the 5.7-liter engine with TPI and the 5-liter TPI V8 engine with five-speed gearbox. Externally, the 5.7-liter engine with TPI was indistinguishable from the TPI five-liter engine. The 5-liter TPI V8 engine provided with manual or automatic transmission 215 hp (218 DIN-PS). The V8 Camaro had new roller bearing rams and modified valve covers with central screws; the cylinder heads had improved seals. Camaro with the G92 and L98 engines received a new HD 7.75 differential from BorgWarner ex factory , which was manufactured by Holden in Australia. All IROC-Z of the 1987 model year with the 5.7-liter TPI engine had rearDisc brakes , self-locking differential and oil cooler.

The most striking change in the model year of 1987 was the integrated in the rear spoiler and not on the rear window mounted third brake light (with the exception of the base coupe without rear spoiler, where the light remained at the old place). The equipment variant Berlinetta did not exist anymore, they gave way to an LT model, basic and Z28 versions remained unchanged in the program. In the IROC-Z and the Z28, the speedometer now reached up to 145 mph (240 km / h), in the base model and in the LT up to 110 mph (180 km / h). The 2.8-liter V6 engine and the five-liter petrol engine remained unchanged.

New was, however, the Camaro convertible - the first since the model year 1969. The conversion led ASC based on the Camaro with T-top, which had a reinforced frame. In the first year only 1007 pieces were created. Since the Camaro celebrated its 20th anniversary in 1987, the new convertibles were considered anniversary models and received a plaque with the engraving "20th Anniversary Commemorative Edition" on the dashboard.

In model year 1988, the Camaro program was tightened heavily; the bad selling LT and the regular Z28 accounted for. This left only the base coupe and the IROC-Z; The latter received due to the elimination of the base Z28 a stripped down equipment (so the previously standard five-spoke 16-inch aluminum wheels were now available at extra cost - series were now the old 15-inch five-spoke steel wheels of the former Z28, which is also the basis -Coupé received). The spoilers and aprons of the former Z28 were now in the basic model series. All 1988 model year engines were injectors - the TBI five-liter V8 engine was given a central intake manifold injection, the 2.8-liter V6 engine, the five-liter engine and the 5.7-liter engine remained unchanged.

In the model year 1989, the model name RS (not used since 1980) returned to the Camaro program. The RS now served as a new base model, which resembled the former Z28 outwardly, but had the standard 2.8-liter V6 engine (the TBI five-liter engine was available at extra cost).

1990 was with 35,048 copies a new low of the series, which was not least due to the fact that the revised Camaro was introduced quite early.

1990 was also the last year for the IROC-Z. Chevrolet had not renewed the contract with the IROC racing series; for that, Chrysler jumped in with the Dodge Daytona . For the first time there was a driver airbag in the Camaro / Firebird . The displacement of the 2.8-liter V6 engine was increased to 3.1 liters. Also new was the crescent-shaped dashboard that existed in the Camaro only from 1990 to 1992.

Mid 1990 debuted the Camaro '91. All models received a facelift with a spoiler / sill package for the RS and the Z28 - the IROC-Z did not exist anymore. The Z28 had a higher rear spoiler and hood on the hood. For the first time the special package B4C was offered for police, government and military authorities - a RS with engine and chassis of the Z28. Nearly 600 copies could be sold.

The model year 1992 was the last for the third generation Camaro. Chevrolet had planned for the 25th Birthday a special model with the aluminum cylinder heads of the Corvette, sports exhaust manifold and six-speed gearbox, but then came on the market, was limited to a model with special trim and emblems. The Camaro with the B4C package received special brakes and suspension parts, making it one of the best Camaro of the third generation. Nearly 500 B4C model year 1992 were sold. The B4C package was also available later on the successor model.

The introduction of the fourth generation took place in early 1993.