The Chevrolet Corvette (C1) is the first generation of the sports car by the Chevrolet division of General Motors introduced late in the 1953 model year and produced through 1962. It is commonly referred to as the "solid-axle" generation, as the independent rear suspension did not appear until the 1963 Sting Ray. The Corvette was rushed into production for its debut model year to capitalize on the enthusiastic public reaction to the concept vehicle, but expectations for the new model were largely unfulfilled. Reviews were mixed and sales fell far short of expectations through the car's early years. The program was nearly canceled, but Chevrolet would ultimately stay the course and Harley Earl and company would transform the Corvette into a true world-class sports car.

In 1927 General Motors hired designer Harley Earl who loved sports cars. GIs returning after serving overseas in the years following World War II were bringing home MGs, Jaguars, Alfa Romeos, and the like.In 1951, Nash Motors began selling an expensive two-seat sports car, the Nash-Healey, that was made in partnership with the Italian designer Pinin Farina and British auto engineer Donald Healey, but there were few moderate-priced models.Earl convinced GM that they needed to build a two-seat sports car, and with his Special Projects crew began working on the new car, "Project Opel" in late 1951 The result was the hand-built, EX-122 pre-production Corvette prototype, which was first shown to the public at the 1953 GM Motorama at the Waldorf-Astoria in New York City on January 17, 1953. Production began six months later. The car is now located at the Kerbeck Corvette museum in Atlantic City and is believed to be the oldest Corvette in existence.

During the last half of 1953, 300 Corvettes were to large degree hand-built on a makeshift assembly line that was installed in an old truck plant in Flint, Michigan while a factory was being prepped for a full-scale 1954 production run. The outer body was made out of then-revolutionary fiberglass material, selected in part because quotas, left over from the war, limited the availability of steel. A 55 degree raked windshield was made of safety glass, while the license plate holder was set back in the trunk, covered with a plastic window. Underneath the new body material were standard components from Chevrolet's regular car line, including the "Blue Flame" inline six-cylinder engine, two-speed Powerglide automatic transmission, and drum brakes. The engine's output was increased however from a triple-carburetor system exclusive to the Corvette, but performance of the car was decidedly "lackluster".Compared to the British and Italian sports cars of the day, the Corvette lacked a manual transmission and required more effort to bring to a stop, but like their British competition, such as Morgan, was not fitted with roll-up windows; this would have to wait until sometime in the 1956 model year. A Paxton centrifugal supercharger became available in 1954 as a dealer-installed option, greatly improving the Corvette's straight-line performance, but sales continued to decline.

The Chevrolet division was GM's entry-level marque Managers at GM were seriously considering shelving the project, leaving the Corvette to be little more than a footnote in automotive history, and would have done so if not for three important events. The first was the 1955 introduction of Chevrolet's first V8 engine since 1919. Late in the model year, the new 195 hp (145 kW) 265 small-block became available with a three-speed manual transmission, coupled to a 3.55:1 axle ratio, the only one offered. The engine was fitted with a single 2366S WCFB four-barrel (four-choke) Carter carburetor. The combination turned the "rather anemic Corvette into a credible if not outstanding performer". The second was the influence of a Russian émigré in GM's engineering department, Zora Arkus-Duntov. The third factor in the Corvette's survival was Ford's introduction of the 1955 two-seat Thunderbird, which was billed as a "personal luxury car", not a sports car. Even so, the Ford-Chevrolet rivalry in those days demanded GM not appear to back down from the challenge. The original concept for the Corvette emblem incorporated an American flag into the design, but was changed well before production since associating the flag with a product was frowned upon. 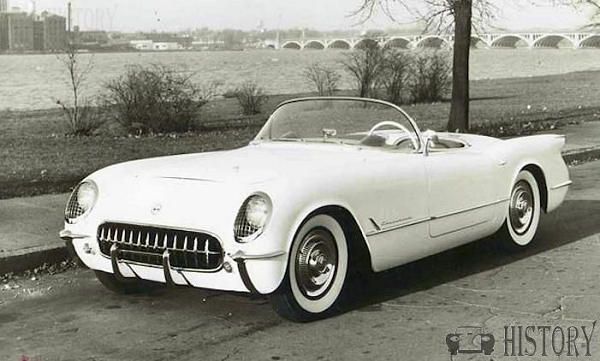 The 1953 model year was not only the Corvette's first production year, but at 300 produced it was also the lowest-volume Corvette. The cars were essentially hand-built and techniques evolved during the production cycle, so that each 1953 Corvette is slightly different. All 1953 models had Polo White exteriors, red interiors,and black canvas soft tops. Order guides showed heaters and AM radios as optional, but all 1953 models were equipped with both. Over two-hundred 1953 Corvettes are known to exist today.They had independent front suspension.The cost of the first production model Corvettes in 1953 was $3490.

The quality of the fiberglass body as well as its fit and finish was lacking. Other problems, such as water leaks and doors that could open while the car was driven, were reported with the most severe errors corrected in subsequent units produced, but some shortcomings continued beyond the Corvette's inaugural year. By December 1953, Chevrolet had a newly equipped factory in St. Louis ready to build 10,000 Corvettes annually. However, negative customer reaction in 1953 and early 1954 models caused sales to plummet.

In 1954, only 3,640 of this model were built and nearly a third were unsold at year's end. New colors were available, but the six-cylinder engine and Powerglide automatic, the only engine and transmission available, were not what sports car enthusiasts expected. It is known that 1954 models were painted Pennant Blue, Sportsman Red, and Black, in addition to Polo White. All had red interiors except for those finished in Pennant Blue that had a beige interior. Order guides listed several options, but all options were "mandatory" and all 1954 Corvettes were equipped the same.

Chevrolet debuted its small-block, 195 hp V8 in 1955 and the engine found its way into the Corvette. At first 1955 V8 Corvettes continued with the mandatory-option Powerglide automatic transmission (as did the few 6-cylinder models built), but a new three-speed manual transmission came along later in the year for V8 models only. Exterior color choices were expanded to at least five, combined with at least four interior colors. Even soft-tops came in three colors and different materials. Despite all this, only 700 Corvettes 1955 Corvettes were built, making it second only to 1953 in scarcity. Very few six-cylinder 1955 models were built, and all documented examples are equipped with automatic transmissions. The "V" in the Corvette emblem was enlarged and gold colored, signifying the V8 engine under the hood and 12 volt electrical systems, while 6-cylinder models retained the 6-volt systems used in 1953-54.Rare option estimate: Manual transmission (75).

There was no doubt Chevrolet was in the sports car business with the release of the 1956 model. It featured a new body, a much better convertible top with power assist optional, real glass roll up windows (also with optional power assist), and an optional hardtop. The 3-speed manual transmission was standard. The Powerglide automatic was optional. The six-cylinder engine was gone. The V8 remained at 265 cubic inches but power ranged from 210 hp to 240 hp. The volume was 3,167, a low number by any contemporary standard and still less than 1954's 3,640, meaning this was the third lowest-volume model in Corvette history. Rare options: RPO 449 special camshaft with the 240 hp engine (111), power windows (547).Delco Radio transistorized signal-seeking (hybrid) car radio, which used both vacuum tubes and transistors in its radio's circuitry (1956 option).

Visually the 1957 model was a near-twin to 1956. Engine displacement increased to 283 cu in (4.6 L), fuel injection became optional, and a 4-speed manual transmission was available after April 9, 1957. Fuel injection first saw regular use on a gasoline engine two years prior on the Mercedes-Benz 300SL "Gullwing". Although the Corvette's GM-Rochester injection used a constant flow system, as opposed to the diesel style nozzle metering system of the Mercedes', the Corvette's engine nevertheless produced about 290 hp (216 kW) (gross). This was underrated by Chevrolet's advertising agency for the 283 hp (211 kW) 283 small-block V8 one hp per in³ slogan, making it one of the first mass-produced engines in history to reach 1 hp/in³. Pushed toward high-performance and racing, principally by Zora Arkus-Duntov who had raced in Europe, 1957 Corvettes could be ordered ready-to-race with special options. Fuel injection was in short supply and 1,040 Corvettes with this option were sold. Rare options: RPO 579E 283 hp (211 kW) engine with fresh air/tach package (43), RPO 684 heavy-duty racing suspension (51), 15" x 5.5" wheels (51), power windows (379), 4-speed transmission (664). 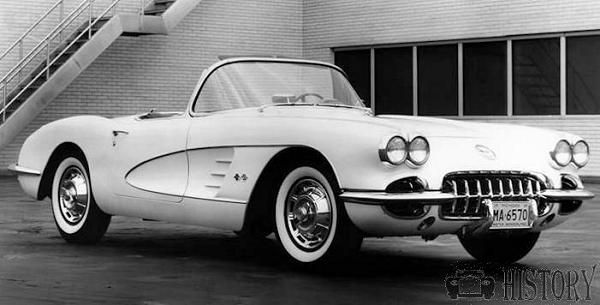 In an era of chrome and four headlamps, the Corvette succumbed to the look of the day. The 1958 model year and the four that followed all had the exposed four-headlamp treatment and prominent grills, but a faux-louvered hood and chrome trunk spears were unique to 1958. The interior and instruments were updated, including placing a tachometer directly in front of the driver. For the 1958 model only, an 8000 rpm tachometer was used rather than the 6000 and rpm units typical in 1955.Optional engine choices included two with twin carburetors (including a 270 hp (200 kW) model with Carter 2613 and 2614 WCFB four-barrels)and two with fuel injection. Power output for the highest rated fuel-injected engine was 290 hp (220 kW). Displacement remained 283 cu in (4.6 l). For the first time, seat belts were factory-installed rather than being dealer-installed as on previous models. Rare options were RPO 684 heavy-duty brakes and suspension (144), RPO 579 250 hp engine (554), 15 by 5.5 in (38 by 14 cm) wheels (404).

For the 1959 model, engines and horsepower ratings did not change. Interiors were revised slightly with different instrument graphics and the addition of a storage bin to the passenger side. A positive reverse lockout shifter with "T" handle was standard with 4-speed manual transmission. This was the only year a turquoise convertible top color could be ordered, and all 24-gallon fuel tank models through 1962 could not be ordered with convertible tops due to inadequate space for the folding top mechanism. Rare options: RPO 684 heavy-duty brakes and suspension (142), metallic brakes (333), 15 by 5.5 in (38 by 14 cm) wheels (214), power windows (547), power convertible top (661). 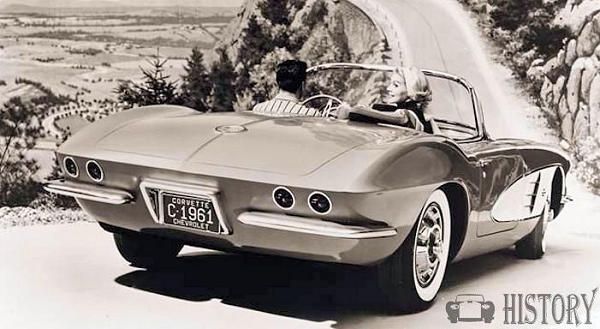 Four taillights appeared on the 1961, a treatment that continues to this day. Engine displacement remained at 283 cubic inches, but power output increased for the two fuel-injected engines to 275 hp and 315 hp. Power ratings for the dual-four barrel engines did not change (245 hp and 270 hp) but this was the last year of their availability. This was the last year for contrasting paint colors in cove areas, and the last two-tone Corvette of any type until 1978. Also debuting in 1961 was a new boat-tail design later used on the C2. Rare options: RPO 353 275 hp engine (118), RPO 687 heavy-duty brakes and steering (233), 15x5.5 wheels (357), power convertible top (442).

The 1962 model year was the last Corvette with a solid-rear-axle suspension that was used from the beginning. With two new engines it was also the quickest. Engine displacement increased to 327 cubic inches, but dual 4-barrel carburetor engines were no longer available. Hydraulic valve lifters were used in the base 250 hp and optional 300 hp engines, solid lifters in the optional carbureted 340 hp and fuel-injected 360 hp (268 kW) versions. Rocker panel trim was seen for the first time, exposed headlights for the last, until 2005. This was the last Corvette model to offer an optional power convertible top mechanism. Rare options: 24-gallon fuel tank (65), RPO 687 heavy-duty brakes and steering (246), power convertible top (350), 15x5.5 wheels (561).