Chevrolet reintroduced the El Camino four years later based on the Chevrolet Chevelle. The 1964 model was similar to the Chevelle forward of the B-pillars and carried both "Chevelle" and "El Camino" badges, but Chevrolet marketed the vehicle as a utility model and Chevelle's most powerful engines were not available. Initial engine offerings included six-cylinder engines of 194 and 230 cubic inches with horsepower ratings of 120 and 155, respectively. The standard V8 was a 283 cubic-inch Chevy small block with two-barrel carburetor and 195 horsepower (145 kW) with optional engines including a 220-horsepower 283 with four-barrel carburetor and dual exhausts. Added to the El Camino's option list during the course of the 1964 model year were two versions of the 327 cubic-inch small block V8 rated at 250 and 300 horsepower (220 kW) — the latter featuring a higher compression ratio of 10.5:1, larger four-barrel carburetor and dual exhausts.

The 1965 El Camino received the same attractive facelift as the '65 Chevelle, with a more pronounced V-shaped front end, and a higher performance version of the 327 engine rated at 350 hp (261 kW) that was also available in Chevelles under option code L-79 was made available. Most of the other engines were carried over from 1964, including the 194 and 230 cubic-inch Turbo Thrift sixes, the 195-horsepower 283 cubic-inch Turbo-Fire V8 and 327 cubic-inch Turbo-Fire V8s of 250 and 300 horsepower (220 kW). 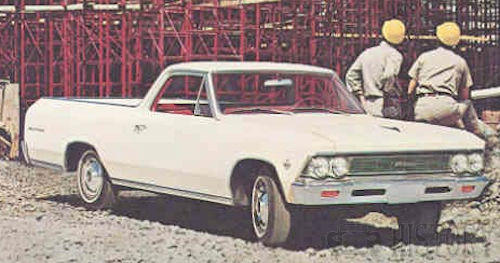 In 1966, GM added a 396 cu in (6.5 L) V8 engine to the lineup rated from 325 to 375 hp (280 kW). The 1965 327 would run low 15s in the 1/4 mile (at some 90 mph), while 1966 to 1969 models were easily into the mid- to upper-14s. New sheetmetal highlighted the 1966 El Camino, identical to the Chevelle forward of the B-pillars. A new instrument panel with horizontal sweep speedometer was featured. Inside, the standard version featured a bench seat interior and rubber floor mat from the lower-line Chevelle 300 series, while the Custom used a more upscale interior from the Chevelle Malibu with plusher cloth-and-vinyl or all-vinyl bench seats and deep twist carpeting, or optional Strato swivel bucket seats with console. A tachometer was optional.

The 1967 El Camino followed the Chevelle's styling facelift with a new grille, front bumper, and trim. Air shocks remained standard equipment on the El Camino, allowing the driver to compensate for a load. The year 1967 also brought the collapsible steering column and options of disc brakes and Turbo Hydramatic 400 3-speed automatic transmission. It was the second year the 396 could be had in the El Camino (both 13480 300 Deluxe base and 13680 Malibu series). Since the L35 396/325 hp engine was the base for the SS396 series, the number of L35 engines reported sold by Chevrolet in 1967 (2,565) were sold in one of the two El Camino series since these were the only series the engine could be ordered in. Since the L34 (now 350 hp) & L78 (375 hp) were available in either El Camino series as well as the two SS396 body styles, there is no way of knowing how many of these optional engines went to which body style. Chevrolet does report 17,176 L34 and 612 L78 engine options were sold in 1967 Chevelles, but there is no breakdown of body styles. The TH400 3-speed automatic was now available as an option (RPO M40) with the 396 engine in both the SS396 series and the 396-equipped El Caminos. The 3-speed manual transmission remained the standard transmission with a heavy duty (RPO M13) also available along with the 2-speed Powerglide and either M20 wide ratio or M21 close ratio 4-speed transmissions.