The fifth-generation Chevrolet Impala are full-size automobiles produced by the Chevrolet division of General Motors for the 1971 through 1976 model years and was one of GM's top-selling models throughout the 1970s. Models included a sport coupe using a semi-fastback roofline shared with other B-body GM cars, custom coupe with the formal roofline from the Caprice, four-door sedan, four-door hardtop sport sedan, and a convertible, - each of which rode on a new 121.5-inch wheelbase and measured 217 inches overall. Station wagons rode on a longer 125-inch wheelbase.

The 1971 redesigned B-body would be the largest car ever offered by Chevrolet. All 1971 Chevrolet engines featured lower compression ratios to permit the use of regular leaded, low lead or unleaded gasoline of at least 91 Research octane per GM corporate mandate in anticipation of the catalytic converters planned for 1975 and later models which necessitated the use of unleaded fuel. A high-performance big block V8 was available in the form of the Turbo-Jet 454, which produced 365 hp in 1971, but power decreased as the years went along. The 1970s marked the impact of the 1973 energy crisis with gasoline prices doubling from 1973 through 1979 and industry car sales plummeted 20 percent between 1973 and 1974. For the first time in recent history, annual passenger car travel in the U.S. declined. The Impala's sales dropped to 176,376 units in 1975, the weakest since its introduction in 1958. An Econominder gauge package was offered for 1975 and 1976 models.

Engine offerings included the base 145-horsepower, 250 cubic-inch Turbo Thrift six-cylinder (available only on the Impala four-door sedan as well as the lower-line Biscayne and Bel Air sedans) and 245-horsepower 350 cubic-inch Turbo Fire V-8 (standard on Impala Sport Sedan, Sport Coupe, Custom Coupe, convertible and Kingswood wagon, and optional on the sedan). Optional engines included the 255-horsepower 400 cubic-inch Turbo Fire V-8 (the standard Caprice and Kingswood Estate engine), 300-horsepower 400 cubic-inch Turbo Jet V8 and 365-horsepower 454 cubic-inch V-8. Early in the model year, all Impalas came standard with three-speed column shift manual transmissions and manual steering as standard equipment, with power steering and one of two automatic transmissions optional. During the first months of the model year, the three-speed Turbo-Hydramatic automatic transmission was optional with all engines while the two-speed Powerglide could be ordered with the 250 6 or 350 V-8s. At mid-year the Turbo-Hydramatic and variable-ratio power steering became standard equipment on all V-8 powered full-sized Chevrolets.

Station wagons featured a 'clamshell' design where the rear power-operated glass slid up into the roof as the tailgate (manually or with power assist), dropped below the load floor. The power tailgate, the first of its kind, ultimately supplanted the manual tailgate which required marked effort to lift from storage. This design was shared with other full-sized GM wagons from Pontiac, Oldsmobile and Buick. Subsequent generations reverted to the door-gate style for its full-size wagons. As expected, 1971 Impala production was well below 1970 totals due to the 67-day corporate wide strike at General Motors that began in September, 1970 after initial 1971-model production began and would not end until November. Impala production ended up at 427,000 units including 2,300 with six-cylinder engines and 425,400 with V8 with other series production totals including Caprice, 91,300; Biscayne, 37,600; Bel Air, 20,000; and station wagons (all series), 91,300.

The 1972 Impala introduced a lower height grille which extended below the bumper and revised taillights now set in the bumper. 1972 saw the last Impala convertible, the following year moving to the top-of-the-line Caprice Classic. The Impala ragtop sold 6,456 units, placing fourth with just under 9% of the market, right behind the Corvette 6,508, ahead of the Mustang's 6,401. Total Impala production for 1972 ended up at 597,500 units and other series totals included Caprice, 178,500; Biscayne (in its final year), 20,500; Bel Air, 41,900; and station wagons, 171,700. The 250-cubic-inch six-cylinder engine was offered in Impala four-door sedans and sport coupes along with a three-speed manual transmission and manual steering at the very beginning of the model year with 1,500 Impala sixes built. After the short run of early-1972 six-cylinder Impalas were built in the fall of 1971, the six-cylinder engine and three-speed manual transmission were relegated to low-line Biscayne and Bel Air sedans. For most the 1972 model year, all Impalas were V-8 powered and came standard with Turbo Hydramatic transmission, power steering and power front disc brakes. The standard Impala engine was now the 165-net 350-cubic-inch Turbo Fire V8 with optional engines including the 170-horsepower, 400-cubic-inch Turbo Fire V-8 (the base Caprice/Kingswood Estate engine), 240-horsepower, 400-cubic-inch Turbo Jet V-8 (rated at 215 horsepower on station wagons) or the 270-horsepower, 454-cubic-inch Turbo Jet V-8 – these were the engine offerings in 49 states; in California the only engines offered were the 165-horsepower 350 and 170-horsepower 400 Turbo Fire small-block V8s due to that state's much stricter emission regulations. The Astro Ventilation system was redesigned for 1972 with the vents relocated from the trunk lid to the door jambs for improved reliability and efficiency over the troublesome 1971 system that was a major source of complaints from owners to Chevrolet and its dealers.

1973 Impalas featured a larger, shock-absorbing front bumper due to new federal mandates which required 5-mile-per-hour (8.0 km/h) impact protection. New square taillights were mounted in the carry-over rear bumper. With the convertible now moved to the top-line Caprice Classic series, (continuing through 1975) Impalas were now all closed body styles for the first time in the nameplate's history and the station wagon known as the Kingswood since 1969 rejoined the Impala series. A 145-horsepower 350 cubic-inch Turbo Fire V-8 engine, Turbo Hydramatic transmission, variable ratio power steering and power front disc brakes were standard on all Impalas. Optional engines in all models included a 175-horsepower 350 Turbo Fire V8 with four-barrel carburetor and 245-horsepower 454 Turbo Jet V8; while the Impala Custom coupe, Sport Sedan and station wagons could be ordered with the 165-horsepower 400 Turbo Fire V8 that was standard on that year's Caprice Classic series. All engines were offered nationwide in 1973.

For 1974, the rear bumper of Impalas and other full-sized Chevrolets incorporated shock absorbing cylinders to meet the upgraded bumper standards with new taillights above the bumper, separated by the license plate and fuel filler. The front end featured a new grille and headlight bezels, a new header panel, and a bumper with a drop down center section. The marker lights moved back up beside the headlamps.

This was the only year of the 1971–1976 models the Impala had a different front end design than the Caprice Classic, as other years used either a grille insert or previous year Caprice front to distinguish the two. The rooflines of the Impala coupes were revised. For 1974 the Custom Coupe was no longer a hardtop, with large fixed rear quarter glass and a thick B-pillar. The Sport Coupe, still a pillar-less hardtop, now used larger roll-down quarter glass like that of the 1971-73 Custom Coupe, and had a narrower, fastback style, flat back window similar to the 1966-68 Caprice coupes. The four-door sedan, four-door hardtop Sports Sedan and station wagons used carryover rooflines from 1973.

The 1975 Impala used a 1974 carried-over Caprice front end, with a grille insert and emblem change. The Caprice model carried a new front end with a swept back style header panel with recessed headlight buckets, a new hood, and new fenders. Also in 1975 upholstery, door panels and the dashboard were revised as were the radio and climate control graphics. Speedometers read up to 100 miles per hour (160 km/h), and added kilometers per hour. 1975 officially debuted a high-energy (HEI) electronic ignition system. Catalytic converters were also introduced as were several new options, including an Econominder gauge package, intermittent wipers, and a divided 50-50 bench seat (with a choice of sport cloth or vinyl trim).

A Landau appearance package was new for 1975. It featured an elk-grained landau vinyl roof (with a chrome band across the roof), a choice of special paint colors, sports-styled dual remote outside rearview mirrors, color-keyed wheel covers, a vinyl bodyside molding insert, and pin-striping. Inside were color-keyed seat belts and floormats; fender and dashboard emblems rounded out the package. (An identical trim package was also sold on the Caprice model.) Sport Coupe models were discontinued after the 1975 model year, leaving the redesigned Custom Coupe, with its wide "B" pillar and fixed rear window, the only 2-door Impala available in 1976. Engine offerings were similar to 1974 except that the 400 Turbo Fire V-8 was now only offered in four-barrel 180-horsepower form and the 454 Turbo Jet V-8 was no longer offered in California. 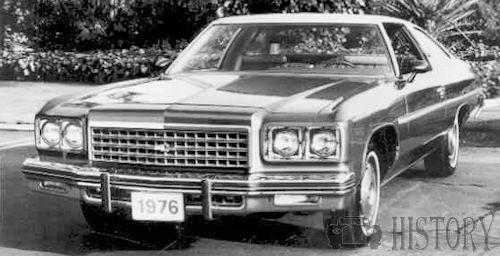 The 1976 Impala used a previous year Caprice nose, with a new "egg crate" grille insert. The Impala had round headlamps while the Caprice used the new quad rectangular ones. Engine offerings were the same as 1975 in both 49-state and California offerings. This was the final year for the four-door hardtop sedan, the big block 454 V-8 now yielding 225 horsepower, and the station wagon clamshell tailgate. The pillarless Impala Sport Coupe faded out of the lineup; a formal-roof Custom Coupe was the only Impala two-door. After 1976, the four-door hardtop body style also would disappear. Measuring more than 222 inches overall on a 121.5-inch wheelbase, the Impala ranked as the last of truly big Chevys. Full-size cars made the most of their perimeter frame and full coil spring suspension to deliver a smooth ride. The interior had such luxuries as simulated rosewood vinyl trim on the instrument panel, steering wheel, and doors. Impalas rode steel-belted radial tires and carried an automatic transmission, power brakes, and variable-ratio power steering. The standard bench seat could be replaced by a 50/50 split front seat, as in 1975. The Landau model, for both Caprice and Impala, continued into 1976 as before.

A lower-priced Impala "S" series, available only as a four-door sedan, was introduced this year for the United States market and functioned as a replacement for the Bel Air, which was dropped after the 1975 model year. The trim and standard features were similar to that of the departed Bel Air series (although this model used the same triple rear taillights as the regular Impala, unlike the twin-taillight setup of the Bel Air). The Impala "S" was sold primarily to fleet and government customers where luxury was not a concern, although the car was available for purchase by private customers who sought basic low-cost transportation with the convenience of a V-8 powered full-size automobile. 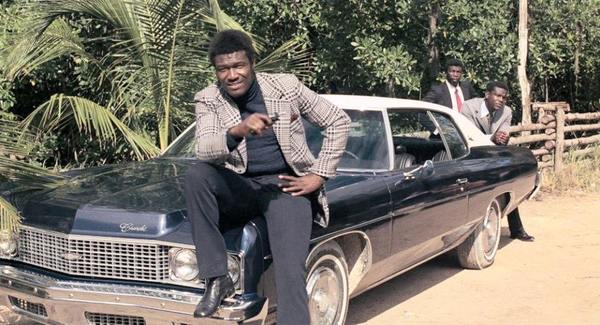