The Chevrolet Impala (fourth generation) are full-size automobiles produced by the Chevrolet division of General Motors for the 1965 through 1970 model years. The 1965 Impala was all new, while the 1967 and 1969 models featured new bodies on the same redesigned perimeter frame introduced on the 1965 models. All Impalas of this generation received annual facelifts as well, distinguishing each model year. Throughout the early 1960s, Chevrolet's basic body designs became increasingly subtle, while the bright trim that was part of the Impala package added more than a touch of luxury to the look. The same pattern was followed in the interiors, where the best materials and equipment Chevrolet had to offer were displayed. In short, the Impala was on its way to becoming a kind of junior-grade Cadillac, which, for both the company and its customers, was just fine.

Totally redesigned in 1965, the Impala set an all-time industry annual sales record of more than 1 million units in the U.S; which has never been bettered. The new full-size Chevys featured dramatically rounded sides, and an all-new front end with new hood contours, curved, frameless side glass (for pillarless models), and sharper angled windshield with newly reshaped vent windows. Sport Coupes wore a sleek semi-fastback roofline, and wheel well moldings were revised. Chevrolet promoted the cars' Wide-Stance design, adhesively bonded windshield, and improved full-coil suspension. A two-tone instrument panel put gauges in a recessed area ahead of the driver. The "X" frame was dropped for a new Girder-Guard full-width perimeter frame which reduced the size of the inside driveline tunnel and redesigned suspension. Two-range Powerglide, as well as Synchro-Mesh 3- and 4-speed manual transmissions were available. The Turbo Hydra-Matic automatic transmission was offered for the first time. As with previous years, Impalas featured more chrome trim inside and out, with pleated tufted upholstery and door panels plus simulated walnut trim on the lower instrument panel.

Engine choices included the inline six-cylinder as well as the famous Chevy small-block and big-block V8s. Automatic transmission buyers were given the option of the newly introduced three-range Turbo Hydra-Matic for the newly introduced Mark IV big-block engine, displacing 396 cubic inches. The old 409-cubic-inch (6.7 L) "W" engine was discontinued early in the 1965 model year, so early-production '65s got the 409, available only in four-barrel 340 and 400 horsepower options. The new 396 Turbo Jet V8 was the first General Motors engine to receive the Rochester Quadra-Jet four-barrel carburetor that would become a mainstay until the early 1980s. The new 396 was available as a 325-horsepower version with 10.25 to 1 compression ratio and hydraulic lifters or a high-performance version with 11 to 1 compression ratio, solid lifters and 425 horsepower.

For $200, an Impala four-door Sport Sedan could be transformed into an Impala Caprice establishing a name destined for decades of life. The Caprice option group included a black-out grille, vinyl top with Fleur de lis emblems, unique wheel covers, and narrow sill moldings. The new interiors were the most luxurious ever seen in a Chevrolet, and an array of comfort/convenience features. Specially stitched cloth door panels were accented with simulated walnut, and contour-padded seats wore a combination of fabric and vinyl. All of this aimed to give Chevy buyers a "one-of-a-kind" taste of Cadillac's look and ride. Its sales success prompted Chevrolet to make the V8-only Caprice a full series for 1966.

The 1966 Impala received only a minor facelift from its predecessor that included a revised horizontal bar grille up front and new triple rectangular taillights that replaced the triple round lights used on full-sized Chevys each year since 1958 with the exception of 1959, and chrome beltline strips were added in response to complaints about parking lot door dings on the clean-lined '65 models. The standard column-shift three-speed manual was now full synchronized, and a new 250-cubic-inch six-cylinder engine replaced the previous 230-cubic-inch six while the 195-horsepower 283-cubic-inch Turbo Fire V-8 remained the base V-8 engine. Optional engines included a 275-horsepower 327-cubic-inch Turbo Fire V-8, the 396-cubic-inch Turbo-Jet V-8 rated at 325 horsepower, or two new 427-cubic-inch Turbo Jet V8s of 390 horsepower with 10.5 to 1 compression ratio and hydraulic lifters or the high performance version rated at 425 horsepower with 11 to 1 compression ratio and solid lifters. A four-speed manual transmission was offered with all V8 engines, while the two-speed Powerglide was the only automatic transmission offered with the six-cylinder engine and 283 and 327-cubic-inch Turbo Fire V8s, and the three-speed Turbo Hydramatic was limited to the 396 and 390-horsepower version of the 427 V-8. The Impala was the #2-selling convertible in the U.S. in 1966, with 38,000 sold.

The 1967 Chevrolet full-size was redesigned with enhanced Coke bottle styling. Dimensions remained roughly the same, still on a 119-inch wheelbase, four inches longer than the mid-size Chevrolet Chevelle. Impala Sport Coupes had a graceful fastback roof line, which flowed in an unbroken line into the rear deck. In keeping with federal regulations, safety features were built into Impalas during the 1967 and 1968 model years, including a fully collapsible energy-absorbing steering column, side marker lights, and shoulder belts for closed models. Most engine offerings were carryover from 1966 including the base 250 cubic-inch Turbo Thrift 6 (155 horsepower) and 283 cubic-inch Turbo Fire V-8 (195 horsepower), and optional 275-horsepower 327 cubic-inch Turbo Fire V-8 and 325-horsepower 396 cubic-inch Turbo Jet V-8, with a 385-horsepower 427 cubic-inch Turbo Jet V-8 now the top offering as the high-performance 425-horsepower version of the 427 offered in 1966 was not listed in the 1967 specifications. The two-speed Powerglide automatic was the only shiftless transmission offered with the 250 6 and 283 V-8, but the three-speed Turbo Hydramatic was now available with the 327 V-8 along with the big-block 396 and 427 V-8s. New options for 1967 included front-disc brakes (standard with the SS-427 option), stereo 8-track player, fiber optic light monitoring system and vacuum power door locks. Cloth-and-vinyl upholstery was standard in most closed body styles, but all-vinyl upholstery was a new option at extra-cost in several colors on all sedan and coupe body styles (heretofore all-vinyl trim was offered as an option on the Sport Coupe and Sport Sedan hardtop body styles in "black" only since 1963), and remained standard equipment on convertible and station wagon models, again in several colors. All Impala models for 1967 also featured upgraded door panels with carpeting on the lower section.

The 1968 model's front end received a face lift similar to the 1965 model, while rear bumpers held triple "horseshoe" shaped taillights. The formal Custom Coupe, previously a Caprice exclusive, became available as an Impala. Most Chevrolets got hidden windshield wipers. Plush new interiors also helped attract buyers. Impala overwhelmed the sales charts, as it had for years. Full-sized cars could have a 250-cubic-inch six, a 307-cubic-inch V-8, either of a pair of 327s of 250 or 275 horsepower, or a 325-horsepower 396-cubic-inch V-8. Topping the list was the big 427, rated at 385 or 425 horsepower. The two-speed Powerglide automatic transmission was still available with the 250 six-cylinder and 307 or 327 V-8s, but the three-speed Turbo Hydramatic could be ordered with all V-8 engines on the Impala Sport Sedan and Custom coupe.

The 1969 Impala and other full-sized Chevrolets were restyled with crisper body lines and front bumpers that wrapped around the grille and ventless front windows were new on all models. The 119-inch (3,023 mm) wheelbase, inner body shell and framework were carried over from the 1965 model – along with the roof lines of pillared four-door sedans and station wagons. The station wagon was renamed the Kingswood - reverting to a pre-1962 Chevrolet practice of using different nameplates on wagons than other models. Inside, front seat headrests were now standard equipment due to a federal safety mandate and the ignition switch moved from the dashboard to the steering column and doubled as a lock for the steering wheel when the key was removed, a Federal mandate that took effect with the 1970 models but introduced a year earlier on all General Motors cars. The instrument panel was restyled and highlighted by a new steering wheel.

The 1969 Impala also offered a new GM-designed variable-ratio power steering unit as optional equipment along with a seldom-ordered "Liquid Tire Chain" option, which was a vacuum activated button that would spray ice melt on the rear tires (UPC option code is "V75"). The standard engine was enlarged to a 235 hp (175 kW) 327 cubic-inch V8 with optional engine choices including a new 350 cubic-inch Turbo Fire V8 rated at 255 and 300 hp (220 kW), a 265 hp (198 kW) 396 cubic-inch Turbo Jet V8, and 427 cubic-inch Turbo Jet V8s rated at 335 and 390 hp (291 kW). The L72 425 horse power engine was available in all B-Bodies. All V8 engines were now available with the three-speed Turbo Hydramatic transmission for the first time though the two-speed Powerglide was still offered with the 327 and 350 V8s. During the 1969 model year Impala production, including Kingswood wagons totaled 777,000 units, compared to 166,000 Caprices and Kingswood Estate wagons, 68,700 Biscaynes and Brookwood wagons, and 155,700 Bel Airs and Townsman wagons. Impala totals for 1969 included 768,000 produced with V-8 engins and 8,700 with six-cylinders. 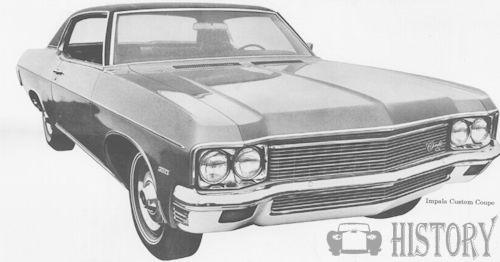 The 1970 Impala got a minor face lift featuring a more conventional bumper under the grill replacing the wrap-around unit used in 1969 and new triple vertical taillights. Fiberglass-belted tires on 15-inch (380 mm) wheels were made standard equipment along with a larger standard 250 hp (186 kW) 350 cubic-inch Turbo Fire V8, on most models (the 250 cubic-inch six-cylinder engine was now only offered on the 1970 Impala four-door sedan as well that year's lower-line Biscayne and Bel Air four-door sedans). Optional V8s included a 300 hp (220 kW) 350 and a new 265 hp (198 kW) 400 cubic-inch Turbo Fire V8 (not to be confused with Chevrolet's Turbo Jet big-block 400 V8 offered on that year's Chevelles and Monte Carlos). At the top of the engine roster, the big block 427 was replaced by a new (and bored out) 454 cubic-inch Turbo Jet V8 offered in power ratings of 345 hp (257 kW) and 390 hp (290 kW). The 155-horsepower Turbo Thrift six-cylinder, and 250- and 265 hp (198 kW) Turbo Fire engines were designed to use regular gasoline while the 300 hp (220 kW) 350 Turbo Fire and both 454 Turbo Jet engines required premium fuel. A three-speed manual transmission with column shift was standard equipment as in previous years but the floor-mounted four-speed manual with Hurst shifter was dropped from the option list for 1970 as were the Strato bucket seats and center console previously offered on coupes. Automatic transmission options included the two-speed Powerglide on 250 6s and 350 V8s, and three-speed Turbo Hydramatic was available with all engines. Power front disc brakes were standard on the Impala Custom coupe and optional on all other models. The 1970 Impala was one of three remaining Chevrolet convertibles, with only 9,562 were built. Interest in all size rag tops had dwindled. So was the fascination with large sporty cars, prompting abandonment of the Impala Super Sport. Output of full-sized Chevrolets dropped sharply for the 1970 calendar year, below the million mark, partly as a result of a 65-day strike in the fall of 1970 - but that strike affected the production of early 1971 models. Impala sales, as expected, ranked far above other big Chevrolets with 612,800 Impalas built (6,500 six-cylinder and 606,300 V-8s) compared to 92,000 Caprices, 75,800 Bel Airs and 35,400 Biscaynes, plus another 162,000 station wagons for all series.

Right Hand Drive cars were manufactured in Canada for export to some countries such as Australia, UK, etc., until 1969. They used a version of the 1965 Impala dash panel until 1969. Australian models were assembled in Australia from kits as this lessened tax on the cars. A similar arrangement applied in New Zealand although the bodies were supplied from Canada already welded, painted and trimmed.