The changes in the automobile marketplace resulted in Chevrolet redesigning the Impala once again in 1977 to meet changing demands. The new downsized Impalas were shorter in length, taller and narrower than before. The new Impala's frame was a shortened version of the one introduced in 1971 and would be utilized until 1996 when the B-body production line was shut down. Even with its trimmer exterior dimensions, the new Impala featured increased headroom, rear-seat legroom and trunk space.
Production of the downsized model increased substantially over 1976, and the Impala regained the number one US sales position. The redesigned 1977 Impala/Caprice was named Motor Trend's car of the year.

Pillarless hardtops were discontinued, the result of rumors of federal rollover standards looming in the near future. The 1977–1979 coupes sported a double bent tempered rear window similar to the 1987 Chevrolet Monte Carlo Aerocoupe.

In 1980, all new sheet-metal was used, although the body style remained similar.
The Impala and the upscale Caprice sold well into the early 1980s. The Impala was reduced to the base model full-size Chevrolet and was popular with fleet usage – including taxi and police pursuit vehicles but was discontinued in 1985, while the Caprice continued unchanged until 1990. Upon the demise of the Impala, the base model full-size Chevrolet was rebranded Caprice starting in 1986, with the upper models being called the Caprice Classic and Caprice Classic Brougham. 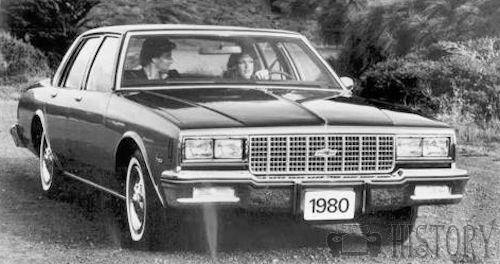