The 1959 Chevrolet Impala was radically reworked sharing bodyshells with lower-end Buicks and Oldsmobiles as well as with Pontiac, part of a GM economy move, Chevrolets rode a wheelbase 11/2 inches longer than before. Atop a new X-frame chassis, roofs sat three inches lower, and bodies measured more than two inches wider overall. The growing size contributed to increased curb weight, one more trend of the times. Its tailfins protruded outward rather than upward. Auto tester Tom McCahill, of Mechanix Illustrated, declared that a Chevy's decklid had "enough room to land a Piper Cub." Chevrolet eschewed the triple-taillight rear style this year with a very large, single controversial "teardrop" taillight at each side. 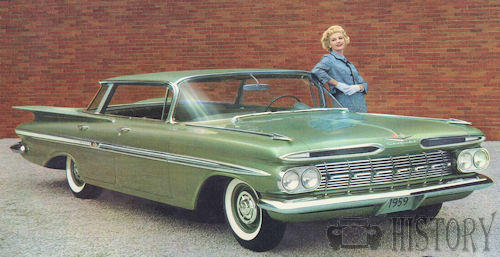 Impala was now a separate series, including a four-door hardtop and four-door sedan, as well as the two-door Sport Coupe and convertible. Sport Coupes featured a shortened roofline and wrap-over back window, promising a "virtually unlimited rear view" to complement the car's new compound-curve windshield. The hardtop Sport Sedan had a huge, pillar-free back window and "flying wing" roofline. Base V8 was the carryover 283 cu in (4,640 cc), at 185 hp (138 kW) horsepower. Performance fans could select 280 cu in outputs to 290 hp (220 kW) – or turn to the big-block 348 cu in (5,700 cc) V8 up to 315 hp (235 kW). With a V8, the Impala convertible listed at $2,967, but a six-cylinder version saved the customer $118. Impala interiors flaunted their top-of-the-line status, offering front and rear armrests, an electric clock, dual sliding sun visors, and crank-operated front ventipanes. A contoured instrument panel held deep-set gauges residing below hoods to prevent glare.

A Flexomatic six-way power seat was a new option, as was "Speedminder" (a device which allowed the driver to set a needle at a specific speed; a buzzer would sound if he exceeded this pre-set speed).

The 1960 models created a more conservative look than was seen on the 1959 models and were simply toned down a bit. Stylists and marketers realized that the fin-and-chrome fashion had about run its course decided to shift direction, creating a more conservative face-lift. The effect was helped by reinstating three modestly sized round taillights on each side of the top-of-the-line Impala. Up front the nostril air intakes above the headlights were deleted completely. More abundantly chromed than Bel Airs or Biscaynes, Impalas found buyers more easily, with better than 490,000 built. Impalas displayed nonfunctional air-intake scoops, plus a white band running along the rear fender. Four body styles vied for customers: Hardtop Sport Sedan, Sport Coupe, Convertible Coupe, and Four-Door Sedan. The Impala Convertible Coupe at $2,847 led the line.

Right-hand drive cars were made in Oshawa, Canada, for New Zealand, Australia and South Africa and assembled locally from CKD or SKD kits. The RHD dashboard was a mirror image of the 1959 Chevrolet panel and shared with equivalent RHD Pontiac models. Australian models were assembled by hand on the GMH Holden assembly lines. 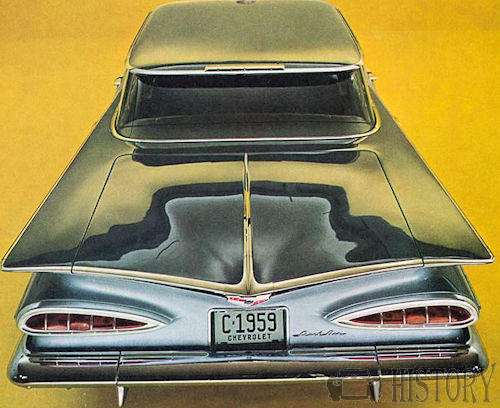 1959 Chevrolet Impala Convertible in Gone in Sixty Seconds From 2000