The Impala was introduced in 1958 and positioned as top of the line Bel Air coupes and convertibles. From the windshield pillar rearward, the 1958 Chevrolet Bel Air Impala differed structurally from typical Chevrolets. Hardtops had a slightly shorter greenhouse and longer rear deck, giving the impression of an extended body.

It was a change from the 1955–1957 shape that was itself a substantial move away from the conservative Chevrolets of past years, longer, lower, and wider than its predecessors. The sharp tailfins of the 1957 gave way to deeply sculptured rear fenders. Three taillights each side would become an Impala hallmark whereas lesser models had two and wagons just one. Special crossed-flag insignias sat above the side moldings plus bright rocker moldings and dummy rear-fender scoops. 1958 was the first year of dual headlamps. 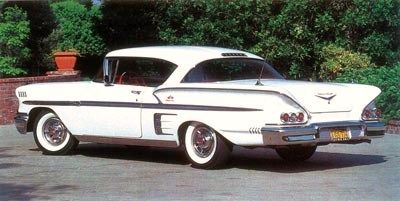 Underneath this new body was a new chassis. The standard perimeter-type frame was abandoned, replaced by a unit with rails laid out in the form of an elongated "X." Chevrolet claimed that the new frame offered increased torsional rigidityand allowed for a lower, yet still roomy passenger compartment. In this design, a transitional step between traditional construction and the later fully unitized body/chassis, the body structure was beefed up in a number of areas (most notably the rocker panels and firewall) to create a solid package.However, this frame was not as effective in protecting the interior structure in a side impact crash, as a traditional perimeter frame.

With a six-cylinder engine, a Chevrolet Bel Air Impala started at $2,586, while $2,693 bought a V8. In all, 55,989 convertibles and 125,480 Sport Coupes were built, 15 percent of production. Interiors held a two-spoke steering wheel and color-keyed door panels with brushed aluminum trim. No other series included a convertible. Impala signaled Chevrolet's entry into the mid-price field, even if the design was less radical than planned. In addition to style and vigorous performance, ads marketed its "quick, eager-to-please handling that lets you know you're the boss."

New-for-1957 Ramjet fuel injection continued to be available as an option for the Turbo-Fire 283 V8. 1958 Impalas equipped with this option are rare and highly desirable as collector cars.

Longer, lower, and wider—a recurrent theme-all Chevrolets had either a full-coil or air ride suspension, displacing the old rear leaf springs. A new "Safety Girder" X-type frame reduced height without headroom loss. A 283 cu in (4,640 cc) engine was now the standard V8, with ratings that ranged from 185 to 290 horsepower. A big-block 348 cu in (5,700 cc) Turbo-Thrust V8 was a new engine option, descended from a truck engine putting out 250 hp (190 kW), 280 hp (210 kW), or 315 hp (235 kW). The 1958 Chevrolet Bel Air Impala helped Chevrolet regain the number one production spot in this recession year.