The first-generation Chevrolet Camaro appeared in dealerships on September 29, 1966. for the 1967 model year on an all brand new rear-wheel drive GM F-body platform and would be available as a 2-door, 2+2 seat, coupe or convertible with a choice of six-cylinder and V8 powerplants. The first-gen Camaro would last up through the 1969 model year.

The Camaro's standard drivetrain was a 230 cu in (3.8 L) straight-6 engine rated at 140 hp (104 kW) and backed by a Saginaw three-speed manual transmission. There were 8 (in 67), 10 (in 68), and 12 (in 69) different engines available in 67-69 Camaros. And there were several transmission options. A four-speed manual was optional, replacing the base three-speed. The two-speed "Powerglide" automatic transmission was a popular option in 1967 and 1968 until the three-speed "Turbo Hydra-Matic 350" automatic became available starting in 1969. The larger Turbo 400 three-speed automatic was an option on SS396 cars.

There was a plethora of other options available all three years, including three main packages:

The RS was an appearance package that included hidden headlights, revised taillights with back-up lights under the rear bumper, RS badging, and exterior bright trim. It was available on any model.

The SS performance package consisted of a 350 or 396 cu in V8 engine and chassis upgrades for better handling and to deal with the additional power. The SS featured non-functional air inlets on the hood, special striping, and SS badging.

The Z/28 performance package was designed (with further modifications) to compete in the SCCA Trans-Am series. It included a solid-lifter 302 V8, 4-speed transmission, power disc brakes, and two wide stripes down the hood and decklid.

Almost all of 1967-1969 Camaros were built in the two U.S. assembly plants: Norwood, Ohio and Van Nuys, California. There were also five non-U.S. Camaro assembly plants in countries that required local assembly and content. These plants were located in the Philippines, Belgium, Switzerland, Venezuela, and Peru.

The 1967 Camaro shared the subframe / semi-unibody design with the 1968 Chevy II Nova. Almost 80 factory and 40 dealer options, including three main packages, were available.

The RS was an appearance package that included hidden headlights, revised taillights with back-up lights under the rear bumper, RS badging, and exterior rocker trim.

The Z/28 option code was introduced in December 1966 for the 1967 model year. It was the brainchild of Vince Piggins, who conceived offering "virtually race-ready" Camaros for sale from any Chevrolet dealer.This option package was not mentioned in any sales literature, so it was unknown to most buyers. The Z/28 option required power front disc brakes and a close-ratio Muncie 4-speed manual transmission (posi-traction was optional). It featured a 302 cu in (4.9 L) small-block V-8 engine, 3" crankshaft with 4" bore, an aluminum intake manifold, and a 4-barrel vacuum secondary Holley carburetor of 780 cfm. The engine was designed specifically to race in the Trans Am series (which required engines smaller than 305 cu in (5.0 L) and public availability of the car. Advertised power of this engine was listed at 290 hp (216 kW). This is an under-rated figure. Chevrolet wanted to keep the horsepower rating at less than 1 hp per cubic inch, for various reasons (e.g. insurance and racing classes). The factory rating of 290 hp occurred at 5300 rpm, while actual peak for the high-revving 302 was closer to 360 hp (268 kW) (with the single four barrel carb) and 400 hp (298 kW) (with optional dual-four barrel carbs) at 6800-7000 rpm. The Z/28 also came with upgraded suspension, racing stripes on the hood and trunk lid, '302' front fender emblems on the 67 and early 68 cars, and 'Z/28' emblems in late 68 & 69. It was also possible to combine the Z/28 package with the RS package.

Only 602 Z/28s were sold in 1967, along with approximately 100 Indianapolis Pace Car replicas. The 1967 and 1968 Z/28s did not have the cowl induction hood, optional on the 1969 Z/28s. The 1967 Z28 received air from an open element air cleaner or from an optional cowl plenum duct attached to the side of the air cleaner that ran to the firewall and got air from the cowl vents. 15-inch rally wheels were included with Z/28s while all other 1967-9 Camaros had 14-inch wheels.

The origin of the Z/28 nameplate came from the RPO codes - RPO Z28 was the code for the Special Performance Package. RPO Z27 was for the Super Sport package.

The styling of the 1968 Camaro was very similar to the 1967 design. With the introduction of Astro Ventilation, a fresh-air-inlet system, the side vent windows were deleted. Side marker lights were added on the front and rear fenders which was a government requirement for all 68 vehicles. It also had a more pointed front grille and divided rear taillights. The front running lights (on non-RS models) were also changed from circular to oval. The big block SS models received chrome hood inserts that imitated velocity stacks.

The shock absorber mounting was staggered to resolve wheel hop issues and higher performance models received multi-leaf rear springs instead of single-leaf units. A 396 cu in (6.5 L) 350 hp (261 kW) big block engine was added as an option for the SS, and the Z28 appeared in Camaro brochures. The 427 cu in (7.0 l) was not available as a Regular Production Option (RPO). Several dealers, such as Baldwin-Motion, Dana, and Yenko, offered the 427 as a dealer-installed replacement for the factory-supplied 396 cid engine. 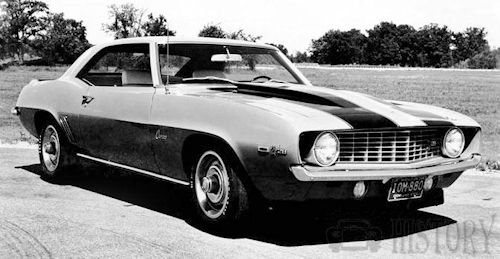 The 1969 Camaro carried over the previous year's drivetrain and major mechanical components, but all-new sheetmetal, except the hood and trunk lid, gave the car a substantially sportier look. The grille was redesigned with a heavy "V" cant and deeply inset headlights. New door skins, rear quarter panels, and rear valance panel also gave the car a much lower, wider, more aggressive look. This styling would serve for the 1969 model year only. Collectors often debate the merits of smooth, rounded lines of 1967 and 1968 model versus the heavily creased and sportier looks of the 1969.

To increase competitiveness in the SCCA Trans Am racing series, optional four wheel disc brakes with four-piston calipers were made available during the year, under RPO JL8, for US$500.30.This system used components from the Corvette and made for a major improvement in the braking capability and was a key to winning the Trans Am championship. The option was expensive and only 206 units were produced.

The Z28 option was still available with the 302 cid small block. It was backed by Muncie four-speed with a new-for-69 standard Hurst shifter and connected to a 12-bolt rear axle with standard 3.73 gears. The 302 featured 11:1 compression, forged pistons, forged steel crankshaft and connecting rods, solid lifter camshaft, and Holley carburetion on a dual-plane intake manifold. A dual four-barrel crossram intake manifold was available as a dealer-installed option.

The 1969 model year was exceptionally long, extending into November 1969, due to manufacturing problem that delayed the introduction of the second generation model planned for 1970. It is a popular myth late-'69 Camaros were sold as 1970 models (due to GM publicity pictures of the '69 Camaro labeled as a 1970), but they were all assigned 1969 VIN codes. 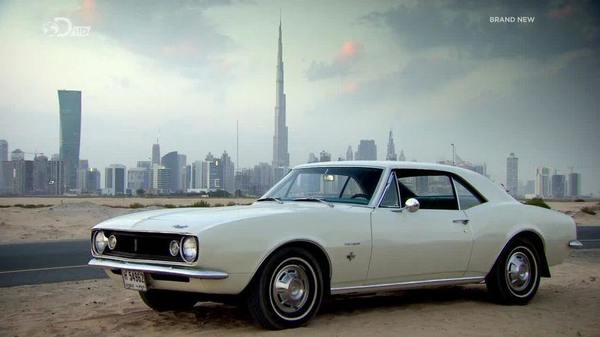 A GM corporate edict forbade Chevrolet from installing engines larger than 400 cu in (6.6 l). Requests from dealers (notably Don Yenko) who were dealer-installing 427 cu in (7.0 l) engines in the Camaro caused Chevrolet to use an ordering process usually used on fleet and special orders (taxis, trucks, etc.) to offer 427 engines in the Camaro. Two Central Office Production Orders (COPO), numbers 9560 and 9561, were offered in the 1969 model year.

The COPO 9561 used the solid lifter L72 big-block engine, making an underrated 425 hp (317 kW) gross. Yenko ordered 201 of these cars to create the now-legendary Yenko Camaro. Other dealers also became aware of the L72 engine package and ordered it. Around 900-1,000 Camaros were fitted with the L72 engine option.

The COPO 9560 used an all-aluminum 427 cu in (7.0 L) big-block called the ZL-1 and was designed specifically for drag racing. The package was conceived by drag racer Dick Harrell, and ordered through Fred Gibb Chevrolet in La Harpe, IL, with the intention of entering NHRA Super Stock drag racing. Just 69 ZL-1 Camaros were produced, the engine alone cost over US$4,000 — nearly twice that of a base coupe with a V8. Though rated at 430 hp (321 kW) gross, the ZL-1 made 376 SAE Net HP in its "as installed" state. With exhaust changes and some tuning, the horsepower jumped to over 500.

The ZL1 engines were hand assembled in a process that took 16 hours each, in a room that Corvette Chief Engineer Zora Arkus-Duntov described as "surgically clean". All ZL1 engines were manufactured at the Tonawanda Assembly Plant before being installed in Corvettes, Camaros, or sold over the counter to racers. 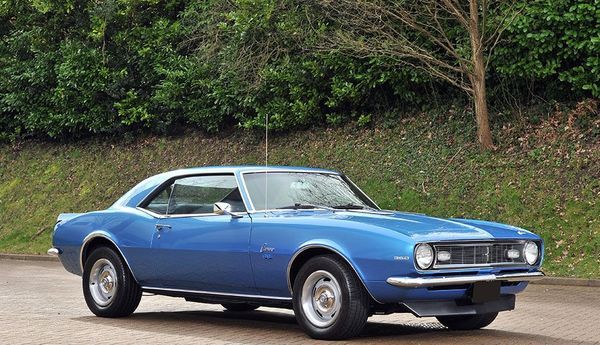