The production of Daewoo Matiz started in 1998 and it was sold in South Korea and many European markets with the code name M100. The exterior design is based on the Lucciola, a Fiat Cinquecento concept by Italdesign Giugiaro which had been rejected by Fiat. The 0.8-litre gasoline engine and the transmission were carryovers from the Daewoo Tico. Engineering was carried out at Daewoo's Worthing Technical Centre in England. The car became the best selling Daewoo model in Europe and in India for the next four years.

The Matiz was originally launched with just a 0.8 L straight-three engine. This engine was developed from the Tico unit by Tickford, a UK company based in Milton Keynes. The Tickford connection was acknowledged in the brochures distributed in UK showrooms. 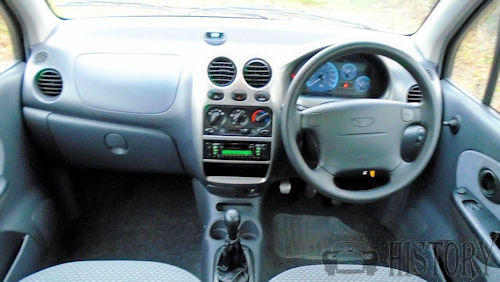 The Chery QQ became the center of an industrial copyright and intellectual rights controversy, as General Motors claimed the car was a copy of the Daewoo Matiz. GM executives demonstrated the extent of the design duplication, noting for example that the doors of the QQ and those of the Spark are interchangeable without modification.

GM China Group indicated the two vehicles "shared remarkably identical body structure, exterior design, interior design and key components" MotorAuthority.com and Car and Driver called the QQ a "carbon copy", while the International Herald Tribune, in a 2005 article, referred to it as a clone.

The Detroit News reported that "the dispute reflects the confusion, risks and ambitions in China's new auto industry, where global carmakers are battling pugnacious upstarts for a piece of what may become the world's largest auto market."

This facelift was designed at Daewoo's Worthing Technical Centre in England and introduced in South Korea in late 2000, and exported from 2001. The front-end structure was modified to accommodate a four-cylinder engine, although the introduction of this engine, the 1.0-litre S-Tec unit, was delayed until after Daewoo's takeover by General Motors in 2002.

M150 is still produced by UzDaewooAuto in Uzbekistan. In South Korea and Japan this updated Matiz was sold under the name Daewoo Matiz II.

In China the car was sold as the Chevrolet Lechi. It remained in production until 2012, when an updated version was introduced as the Baojun Lechi. It is to be offered under both Chevrolet and Baojun brands during a transition period. The Lechi has also received certain powertrain updates, making the car economical enough to qualify for a subsidy and a tax break from the Chinese government.