The redesigned Matiz (codenamed M300) was launched in 2009 and is based on the 2007 Chevrolet Beat concept car. Although sold globally as the Chevrolet Spark, in India this model retains the Beat name from the concept car, as the second generation Spark continues to be sold in this market. Prior to the 2011 elimination of the Daewoo marque in South Korea, the third generation Spark was marketed as the Daewoo Matiz Creative.

The Chevrolet Beat was unveiled at the 2007 New York International Auto Show alongside two other concept vehicles, the Trax and the Groove. The Beat is a front-drive, three-door hatchback concept, derived from the Daewoo Kalos. It was built in India, and designed by GM Daewoo in South Korea. It is powered by a 1.2 L turbocharged gasoline engine mated to an automatic transmission.

The Beat concept sports a Vertigo Green exterior paint job with the same hue carried over to parts of the interior. Its profile is high at the rear and tapering down evenly to the front of the grille. Headlights that appear to extend all the way from the base of the grille to the base of the windshield are LED-type. Oversize 17 inch wheels barely hide the matching green paint of disc brakes. Twin taillights that extend upward to the back-up lights are also LEDs.

In early 2007, GM conducted a poll testing the relative popularity of the Beat, Trax and Groove concepts on a Chevrolet website, with the Beat receiving nearly 50% of the vote, which ultimately determined the car making it into production. This car was designed to appeal to young car buyers in urban markets, infusing the energy, diversity and excitement of urban life into a car that would deliver good-looking fun, fuel economy and value.

GM displayed a prototype woodie version of the forthcoming Chevrolet Spark for the 2010 Paris Motor Show.

The basic equipment that is standard across all versions of the Chevrolet Spark (10-15).

GM presented a pre-production version of the Chevrolet Beat carrying the Chevrolet Spark nameplate at the 2009 North American International Auto Show. The production version was announced at the 2009 North American International Auto Show, but only the Beat concept was shown at the time. The production Chevrolet Spark was unveiled at the 2009 Geneva Motor Show. It became available in Europe in the first quarter of 2010, followed by other markets worldwide, with US sales set to begin in early 2012. Commercial production of a 5-door Chevrolet Beat started from December 15, 2009, in Halol, Gujarat, India. It was launched in India on January 5, 2010, during Auto Expo New Delhi, India.

The Holden version, named Barina Spark, was revealed at the 2010 Australian International Motor Show in Sydney in October.

In North America, the Spark was first delivered to GM dealerships in Mexico for the 2012 model year, replacing the Chevrolet Matiz (formerly Pontiac G2 Matiz). The United States version of the 2013 Chevrolet Spark went into production on April 16, 2012, and will be starting to arrive in dealerships beginning in August 2012.

Reported by Edmunds.com the 2013 Spark was the fastest selling car in the United States for July 2012, with just 6 days from when they arrived at dealers to when they were sold.

General Motors has launched the diesel version of Chevrolet Beat in the Indian auto market on July 25, 2011. The 3-cylinder, 936 cc turbodiesel engine produces 62.5 PS and 160.26 Nm of torque, resulting in good acceleration and pick up. The 1.0 L, 936 cc diesel engine enables the car to cross the 100 kmph in 16 seconds and reach a top speed of 143 kmph. Chevrolet Beat Diesel offers mileage of 24 kmpl (56 mpg) as per the ARAI (Automotive Research Association of India) test reports. The engine is based on the Fiat Multijet diesel technology.

In October 2011, General Motors announced the production of the Chevrolet Spark EV, an all-electric version of the third generation Chevrolet Spark, with sales planned to begin in select U.S. and global markets beginning in 2013. In October 2012, GM Korea announced it will start making and selling the Spark EV domestically in early 2013. GM plans to sell the Spark EV in limited quantities in California, Oregon, Canada, South Korea and select European markets. Sales in the U.S. are expected to start in July 2013. The production version was unveiled at the 2012 Los Angeles Auto Show. The Spark EV would be the first all-electric passenger car marketed by General Motors in the U.S. since the EV1was discontinued in 1999.

As of November 2012[update], GM has not disclosed details about the range. The electric car will be powered by a nanophosphate lithium-ion battery pack supplied by A123 Systems, and an electric motor with specs originally given as a peak power of 85 kW (114 hp) and sustained power of 56 kW (75 hp).However, the production version unveiled in November 2012 features an 100 kW (130 hp) motor, providing 400 lb-ft of torque, powered by a 20 kWh lithium-ion battery pack.The Spark EV can be fast-charged to 80% of capacity in 20 minutes using an optional connector, and charging time increases to about seven hours using a dedicated 240-volt line.

Design of the Spark EV considered feedback from participants in Chevrolet’s electric vehicle demonstration fleets in India (Beat EV), Shanghai (Sail EV), and Korea (Cruze EV). The Chevrolet Beat EV was presented by General Motors in India in November 2011. The electric version uses the same glider as the conventional petrol and diesel-powered Beat. The Beat EV is powered by a 300 cell lithium-ion battery with a total energy capacity of about 20 kWh. The battery weighs 270 kg (600 lb) and has an estimated all-electric range of 130 km (81 mi) under normal driving conditions. The liquid-cooled battery can be charged from 240V domestic electrical sockets and can be operated at temperatures ranging from -20°C to 45°C. The car also has a regenerative braking system. 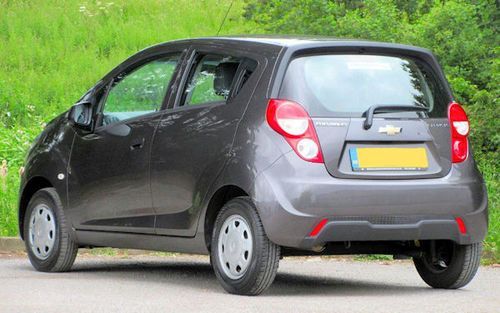