Much the same as Caterham's other models in the chassis and body With front engine and rear wheel drive, the Super 7 HPC differed in that it used a Vauxhall engine for the first time, having used mostly Ford and Rover powerplants prior to the HPC's launch in 1992.

The Surrey, England based company utilized their strong steel spaceframe chassis under the HPC, with built-in roll-over bar that also serves to stiffen the rear end.

The all-independent suspension used a double A-arm front set-up and de Dion rear axle, and while there were vented discs all around, they weren't huge because the car was so lightweight. The gearbox used is from Ford with a Caterham belhousing to convert the Vauxhall engine to a rear wheel drive format.

Alloy 7x 16-inch (178x406mm) rims with Goodyear Eagle tyres provided all the road-contact the car needed; it took an awful lot to unstick it in corners. 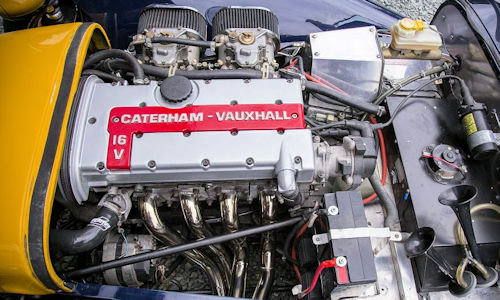