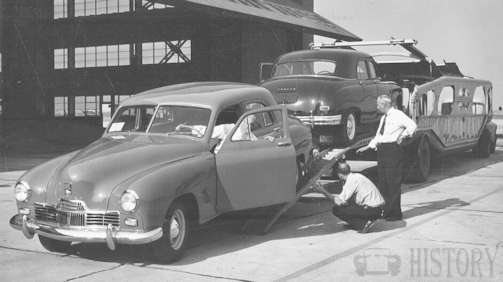 On August 9, 1945, Henry John Kaiser , civil engineer and industrialist, and Joseph W. Frazer , director of automobile manufacturer Graham-Paige , founded the Kaiser-Frazer Corporation in Nevada . In the following year, automobile production first began in a plant owned by Kaiser Industries in the western United States. First, prototypes of a car model with front-wheel drive emerged. But serial production did not happen. Later, all activities were relocated to Willow Run near Detroit. In 1946, the models Kaiser K 100 Special and Kaiser K 101 Custom appear, flat, large, 4-door sedan with 6-cylinder engine and rear-wheel drive. Frazer markets its nearly identical model in cooperation with its employer as Frazer-Graham-Paige (about 6400 vehicles) and also simply as Frazer Sedan (30,000 vehicles). The Frazer were a bit more expensive and better equipped than the Kaiser models. In the years 1947 and 1948 over 200,000 vehicles of the brands Kaiser and Frazer were manufactured.

In the following years, variants of the Kaiser K 100 / K 101 emerged as a 5-door station wagon with tailgate, as a 4-door convertible and as a 2-door sedan. In 1949 Joseph Frazer left the company. His vehicles - always more luxurious versions of the identical Kaiser cars - were further developed by Kaiser until 1951 and then discontinued.

In 1952 Kaiser put on a compact car, a 2-door sedan, which he offered as Henry J (his first name) and the mail order company Sears-Roebuck as Allstate .

In 1953, the financial problems of Kaiser Industries worsened. The "Big Three" (GM, Ford and Chrysler) had many times the development money available and also tried to push the independent car manufacturers, such as Kaiser, with price dumpingfrom the market. In order to offer customers a special offer - which the "Big Three" could not offer until then - Kaiser bought the also-distressed car manufacturer Willys-Overland in Toledo , Ohio , who also produced the off-road vehicle Jeep in addition to small cars. The new parent company was called Kaiser-Willys and included not only Kaiser Motors but also the renamed Willys Motor Company,

In 1954, with the help of the designer Howard "Dutch" Darrin a 2-door convertible, whose special feature was a small, fan-shaped radiator grille. The emperor Darrin was only one year on offer; 435 copies were sold. Later, the car was then available at Howard Darrin - also with V8 engine.

In 1955 Kaiser-Willys decided to give up the production of passenger cars. The rights for the car models and about 1000 cars manufactured in 1955 were sold to the newly founded Industrias Kaiser Argentina (IKA) in Argentina , where the Emperor Manhattan was further produced until 1961 as Emperor Carabela ; there arose 10,282 copies . Kaiser-Willys focused on making jeeps.

In 1963, the company in Toledo was renamed Kaiser Jeep Corporation and taken over in 1970 by American Motors Corporation . 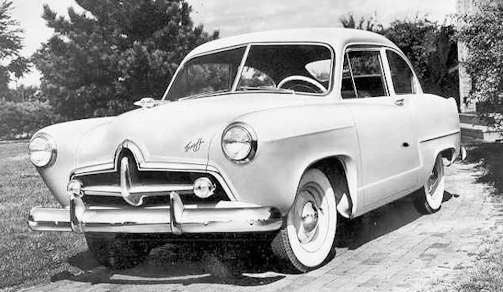