The Caparo T1 is a British mid-engine, rear-wheel drive, two-seat automobile built by Caparo Vehicle Technologies, founded by design director Ben Scott-Geddes and engineering director Graham Halstead, engineers formerly involved in the development of the McLaren F1 The T1 was inspired by Formula One design, and intended as a relatively affordable street legal race car . The T1 was scheduled for production in mid-2007 for a price of GB£235,000 with approximately 25 cars per year built but as of 2012, 16 examples have been sold in the United Kingdom.

The exterior of the T1 closely resembles that of a racing prototype or Formula One racing car. It features a carbon fibre aerodynamic low drag body design, composed of individual sections, with an adjustable twin element front wing, single element rear wing, and fowler flaps, and a ground effect diffuser, allowing it to create 875 kilograms (1,930 lb) of downforce at 240 kilometres per hour (150 mph).The wings are replaceable with road and track variations.

The interior of the T1 is a two-seat configuration, lacking any amenities and luxuries to reduce excess weight. The passenger's seat is set back from the driver's seat slightly, allowing the seats to be placed closer together, thereby reducing the overall width of the T1. Offered are a head protection system, six-point harnesses for the driver and passenger, compatible with a HANS device, and is designed with a central safety cell made of a high-strength steel roll hoop with a fire system. The dashboard is multi-function with race data logging and speed sensors for traction control and launch control. 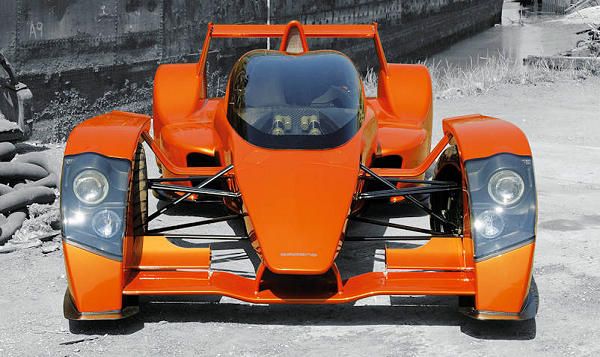 The T1 sports a 116-kilogram (260 lb), 32-valve, 3,496-cubic-centimetre (3.5 L), all-aluminium, naturally aspirated, Menard V8 engine with cylinder banks mounted at 90° and lubricated via a dry sump oil system. The engine has gone through several designs, previously including a smaller 2.4-litre supercharged unit. The production design generates a maximum power of 575 horsepower (429 kW; 583 PS) at 10,500 revolutions per minute and a maximum torque of 310 pound-feet (420 N·m) at 9,000 revolutions per minute, giving the car a power-to-weight ratio of 1,223 horsepower per tonne (912.8 kW/t). In addition, the engine has been reported to successfully reach 700 horsepower (520 kW; 710 PS) on methanol fuel. The engine is controlled via a fully tunable Pectel SQ6 engine control unit and the throttle is controlled via a throttle-by-wire system.

The T1's gearbox is a 6-speed Hewland sequential made of a magnesium and carbon construction that has a variety of available gear ratios and utilizes a pneumatic actuator to shift, able to upshift in 60 milliseconds and downshift in 30 milliseconds. Furthermore, the drivetrain incorporates a limited slip differential and equal length hollow tripod driveshafts.

The T1 was officially unveiled by Albert II, Prince of Monaco, joined by Murray Walker, at the Top Marques auto show in Monaco on April 20, 2006. The show car unveiled was a prototype, painted orange as historic McLaren cars were due to the nature of the T1's designers being ex-McLaren engineers. Another test vehicle was reported to have been under construction at the time.

During the MPH '07 auto show, on October 30 through November 2 and later November 13 through November 16, 2007, Caparo, in conjunction with the London Metropolitan Police, unveiled a prototype police vehicle variant of the T1 named the Rapid Response Vehicle (RRV). However, Top Gear and Edmunds reported that the car would not be put into production.

On November 11, 2007, the T1 surpassed the Top Gear Power Board leader's time of 1:17.6, then held by the Koenigsegg CCX, with a time of 1:10.6. Immediately after having declared the time and placed it on the Power Board, presenter Jeremy Clarkson removed the record because it did not meet the show's rule that the car must be able to go over a speed bump. However, Ben Scott-Geddes of Caparo has stated that, "the model we supplied to Top Gear was one of our final engineering vehicles without adjustable ride height and electronic active driver control systems which are standard on our production models. When drivers select the 'road' setting, the car is more tractable in slower speed conditions and the ride height is fully adjustable to bring the car up to 90 mm clearance, making it more than capable of driving over speed bumps."

When driving the Caparo, Clarkson had stated that limited aerodynamic downforce is created at slow speeds, saying that it would be an excellent excuse for a policeman since "[he] has to take that corner at a thousand mph because if [he] takes it at thirty, [he'll] crash. The car had low levels of lateral traction while cornering if it was not being driven rapidly. Aerodynamically, this vehicle is designed such that air passing over the body at high rates of speed "pushes" the vehicle against the road (allowing for higher cornering speeds). He criticized the handling characteristics, proposing that the vehicle was difficult to control around corners at low speeds, and that on a wet or cold day (these factors negatively affect grip) there were problems even at higher speeds. 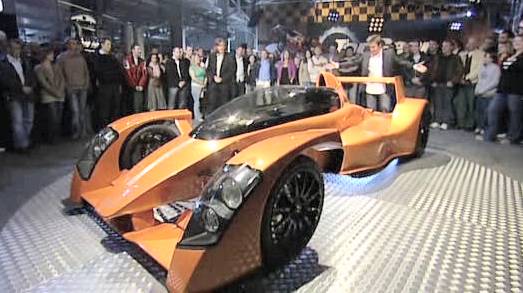