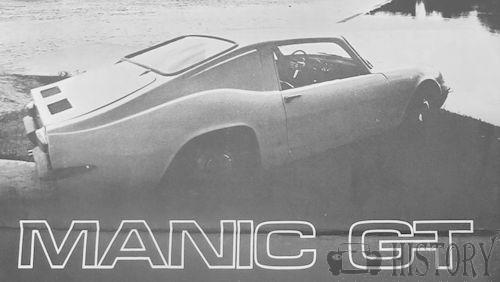 In the late 1960s an employee of Renault-Canada's public relations department named Jacques About was asked to assess the feasibility of importing the Alpine A110 berlinette into Canada. At that time Alpine was an independent company (they would be absorbed by Renault in 1974) that used Renault engines in their cars, which were then sold through Renault dealers in Europe. Although the results of the survey were positive, Renault chose not to import the Alpine. About would leave Renault shortly thereafter.

Jacques About was born in France on February 14th 1938. His early childhood was spent in Vietnam but he would return to France for his secondary education. In 1955 he emigrated to Canada. Following his graduation from the College Stanislas he pursued a variety of occupations, including physical education teacher, sports-journalist, automotive industry analyst and racing driver.

In 1968 About established Les Automobiles Manic Inc. The company's name, pronounced "ma-NEEK", was a shortened version of the Montagnais word for Québec's Manicouagan River and its Manic-5 hydroelectric dam (since renamed as the Daniel-Johnson Dam) whose curves inspired About.

The company's first product was a version of an open-wheeled racing car developed by the French "Groupe de Recherches Automobiles de Course" (GRAC). In Europe the car raced in the Formula France series.

In Canada the car would be built by Manic under license and be called the Manic-GRAC. With sponsorship from Gitane cigarettes, it was campaigned by the company's own team, l'Écurie Manic, in Forumula C. Serge Soumille would take a turn as a driver.

The Manic-GRAC enjoyed a measure of success, including setting track records at Saint-Jovite and Mosport. It also garnered publicity which raised the profile of the young company.

The company would later embark on development of an endurance racer called the Manic PA-II. This car was built to run in the Group 6 class for prototypes, and would have full barchette-style bodywork.

The company's next project was a compact two passenger road-going berlinette called the Manic GT. In trying to create a uniquely Canadian visual identity, the styling of the car was to be a hybrid, with the front end echoing contemporary European work and the rear displaying an American influence.

The GT was designed by Serge Soumille and built with the assistance of chief mechanic Maurice Gris, both of whom, like About, were originally from France. The prototype Manic GT used many parts from the Renault 8. The car was built on a Renault 8 chassis with a steel roll-over structure added to improve safety and add stiffness to the frame. Mounted behind the rear axle centre-line was a 1,108 cc (67.6 cu in) Renault Cléon-Fonte engine. This inline four-cylinder motor had a wet-linered cast-iron block with five main bearings and an alloy cylinder head with overhead valves. The body of molded fiberglass was bonded, rather than bolted, to the chassis. While this further stiffened the structure it made repairs difficult. Steering was by rack-and-pinion. The suspension was independent at all four wheels via coil springs and telescopic dampers. The brakes were likewise disks at all four wheels. An anti-roll bar was mounted at the front. Many of the car's other components and trim came from Renault.

The first Manic GT would be built with financial support from a small group of lawyers in Montreal familiar with the project. Construction took place in the company's facility in Terrebonne.

The prototype was first shown to the public at the Montreal Auto Show in April of 1969. That same year it was also displayed at the Québec Pavilion at the Worlds Fair in Osaka Japan.

Following the car's debut About was able to secure financial backing from the Bombardier International Capital Corporation, the Steinberg family, the Caisse de Dépôt, the Industrial Credit Bureau of Québec and the Canadian government. Initial capitalization reached more than $ 1,500,000.

About contracted with Renault to use the chassis and power-train from the Renault 8 and 10 sedans as the basis for the production Manic, whose full model name would be the Manic GT PAI. The production engine was still a Cléon-Fonte but was now the 1,289 cc (78.7 cu in) "810" version, making this essentially a Renault 10 platform. The car was offered in three stages of tune: 65, 80 and 105 horsepower permitting top speeds of 169, 193 and 217 km/h respectively.Power reached the rear wheels through a standard four-speed manual transmission, while a five-speed was available as an option.The Manic GT was to be sold and serviced by Renault dealers across Canada.

Production of the GT began in October of 1969 at the Terrebonne factory. The car was advertised at a price of $3384.00 Canadian fully equipped. Now in its final production form, the GT made another appearance at the Montreal Auto Show in 1970, where it appeared alongside the Manic-GRAC and the PA-II.

The factory soon ran into problems obtaining parts from Renault. While major components for unfinished cars sat on the factory floor many smaller but still critical parts were not available. The factory attempted to fill their requirements by buying parts from Renault dealers in Mexico and Spain. With no financial penalty for late delivery written into their supplier agreement with Renault, Automobiles Manic had little recourse other than to threaten to withhold payment, which would only worsen the relationship with Renault.

Investors in Manic demanded that Renault assume the losses caused by these delays. Renault refused and the investors subsequently cut off funding for the company.

While the factory was facing these problems, in April of 1971 the Manic GT made two important appearances in the United States. In Detroit, a GT was successfully homologated for sale in that country. In New York a GT was put on display at that city's 1971 Auto Show. An order for 1000 cars was received from an American distributor, but this came too late to change the company's fortunes.

The Granby factory was closed in May of 1971, and on June 8th 1971 Les Automobiles Manic officially ceased operations.

While estimates vary, the number of Manic GTs produced is typically said to have been 160.