The Cadillac Aurora was a concept vehicle that introduced the Cadillac Division of General Motors at the Chicago Auto Show in 1990.

The four-door sedan in a very rounded design had a consistent wedge shape. The grid design of the radiator grille was repeated on the rear panel with the rear lights used.

The car was powered by the transversely mounted 4.5-liter V8 engine of the Allanté with 200 hp (149 kW) maximum power. The engine power was transmitted via a four-speed automatic transmission to all four wheels . The car had a glass roof with adjustable tint.

This vehicle was never manufactured in series at Cadillac, but technically it was an early design from the Oldsmobile Aurora .The design of the vehicle was partially implemented in series, the Opel Omega B .The vehicle can be seen in a scene in the movie Demolition Man . 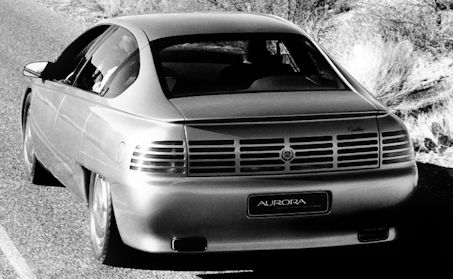