Automotive manufacturer of Sveta Nedelja, Croatia From 2009 on

Rimac Automobili is a Croatian car manufacturer headquartered in Sveta Nedelja, Croatia, that develops and produces electric hypercars, drivetrains and battery systems. The company was founded in 2009 by Mate Rimac with the vision to create the sports car of the 21st century. Rimac Automobili's first model, the Concept One, is known as the world's fastest production electric vehicle.

While manufacturing and marketing high-performance vehicles under its own brand, Rimac also develops and produces battery packs, drivetrain systems and full vehicles for other companies.Among other projects, Rimac is in charge for producing KERS hybrid battery systems for Aston Martin's all-new hyper car, the Valkyrie. The company also produces battery systems for Koenigsegg (specifically for Koenigsegg Regera) and Jaguar Cars as well as other automakers, and developed infotainment systems for Renault. In 2018, it entered a technical partnership with Pininfarina, whose first car, the Pininfarina PFo, is said to be based on the same architecture as the C_Two. The Applus+ IDIADA Volar-E is an example of the solutions Rimac Automobili is able to deliver. During the 88th Geneva International Motor Show in March 2018, the company unveiled its second and latest model, the C_Two.

Rimac Automobili was officially founded in 2009 in Sveta Nedelja, near Zagreb (Croatia), where suitable facilities were rented.In the early days, Mate Rimac's converted e-M3 served as Rimac Automobili first test car. The founder and CEO of the company started to convert this car when he was only 19 years old: “I owned an old BMW E30 (MY 1984) which I used for drift and circuit races. At one of these races, the gas engine suddenly blew up. At that moment, I decided to try building an EV. After one year or so the car was able to drive but I was not yet satisfied with the result. It was heavy, not very powerful and the range was very limited. For this reason, I started to gather a team of experts to develop our own components since I believed that the electric propulsion could give much more compared to what was available on the market. At that time, I already had a very clear vision of my ultimate goal. Today, hard work is making my dream come

The BMW E30 prototype is called the "Green Monster" by the designers of the company. With a 0-62 mph acceleration achieved in 3.3 seconds mark, it eared the title of fastest accelerating electric vehicle in Category A, Group VIII (electric vehicle) and Class 3 (over 1000 kg) in 2011. The “green monster” develops 442 kW (601 PS; 593 hp) and 900 N⋅m (664 lb⋅ft) of torque, reaches 100 km/h from a standstill in 3.3 sec and has a top speed of 174 mph (280 km/h). Five development updates have pushed the e-M3 to become the officially fastest accelerating electric vehicle according to strict FIA rules.

The original BMW went through five stages of reinvention and now, says Rimac, "it got faster, lighter and more reliable each time." At that point, once realised how little of the original car had remained, he decided to build a new and faster car from scratch. 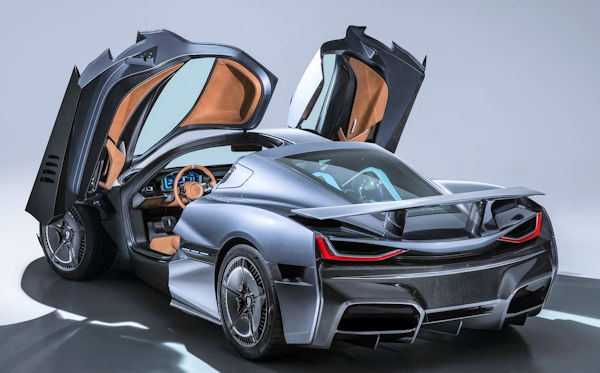