The Bugatti Veyron EB 16.4 is a mid-engined supercar, designed and developed by the Volkswagen Group and manufactured in Molsheim, France, by Bugatti Automobiles S.A.S.

The Veyron's chief designer was Hartmut Warkuss, and the exterior was designed by Jozef Kabaň of Volkswagen, with much of the engineering work being conducted under the guidance of engineering chief Wolfgang Schreiber.

Several special variants have been produced. In December 2010, Bugatti began offering prospective buyers the ability to customize exterior and interiors colours by using the Veyron 16.4 Configurator application on the marque's official website.

Origin of the car

In 1998, the Volkswagen Group purchased the trademark rights on the former car manufacturer Bugatti in order to revive the brand. Starting with the Bugatti EB118, they presented at various international auto shows a total of four 18-cylinder concept cars. At the 1999 Tokyo Motor Show, the first study of the Veyron was presented At the time, the name of the concept car was "Bugatti Veyron EB 18.4," and it was equipped with a 3-bank W18 engine engine instead of the 2-bank W16 engine engine of the production version. While the three previous prototypes had been styled by Giugiaro, the Veyron was designed by the Volkswagen stylists.

The decision to start production of the car was taken by the Volkswagen Group in 2001. The first roadworthy prototype was completed in August 2003. It is identical except for a few details to the later series variant. In the development to series production considerable technical problems had to be addressed, so that the start of production was delayed repeatedly, until September 2005.

The Veyron EB 16.4 is named in honour of Pierre Veyron, a Bugatti development engineer, test driver and company race driver who, with co-driver Jean-Pierre Wimille, won the 1939 24 hours of Le Mans while driving a Bugatti. The "EB" refers to Bugatti founder Ettore Bugatti and the "16.4" refers to the engine's 16 cylinders and four turbochargers.

At the beginning of April 2013, driving.co.uk (also known as Sunday Times Driving) began an investigation following claims from US car maker Hennessey that its 928 kW (1,244 bhp) Hennessey Venom GT was the new world’s fastest production car, taking the crown from the Guinness World Record-holding Bugatti Veyron Super Sport. With a recorded speed of 427.6 km/h (265.7 mph) the Hennessey was 3.4 km/h (2.1 mph) slower than the Veyron but Hennessey dismissed Bugatti’s official record saying that the Veyron Super Sport was restricted to 415 km/h (258 mph) in production form and that for it to achieve its record top speed of 431.0 km/h (267.8 mph), the car used was in a state of tune not available to customers. Hennessey said its Venom GT was road-ready and unmodified and was therefore a production car in the strict sense of the term.

Driving.co.uk requested clarification from Guinness World Records, which investigated this claim and found that the modification was against the official guidelines of the record. Upon finding this, Guinness World Records voided the Super Sport's record and announced it was "reviewing this category with expert external consultants to ensure our records fairly reflect achievements in this field."

After further review, Shelby SuperCars, the producers of the Ultimate Aero TT, said that they had reclaimed the record, however Guinness reinstated the Super Sport's record after coming to the conclusion that "a change to the speed limiter does not alter the fundamental design of the car or its engine."

The Veyron features an 8.0-litre, quad-turbocharged, W16 cylinder engine, equivalent to two narrow-angle V8 engines bolted together. Each cylinder has four valves for a total of 64, but the VR8 configuration of each bank allows two overhead camshafts to drive two banks of cylinders so only four camshafts are needed. The engine is fed by four turbochargers and displaces 7,993 cubic centimetres (487.8 cu in), with a square 86 by 86 mm (3.39 by 3.39 in) bore and stroke.

The transmission is a dual-clutch direct-shift gearbox computer-controlled automatic with seven gear ratios, with magnesium paddles behind the steering wheel and a shift time of less than 150 milliseconds, built by Ricardo of England rather than Borg-Warner, who designed the six speed DSG used in the mainstream Volkswagen Group marques. The Veyron can be driven in either semi-automatic or fully automatic mode. A replacement transmission for the Veyron costs just over US$120,000. It also has permanent all-wheel drive using the Haldex Traction system. It uses special Michelin PAX run-flat tyres, designed specifically to accommodate the Veyron's top speed, and cost US$25,000 per set. The tyres can be mounted on the rims only in France, a service which costs US$70,000. Kerb weight is 1,888 kilograms (4,162 lb). This gives the car a power-to-weight ratio, according to Volkswagen Group's figures, of 530 PS (390 kW; 523 bhp) per ton.

According to Volkswagen Group and certified by TÜV Süddeutschland, the final production Veyron engine produces 1,001 metric horsepower (736 kW; 987 bhp) of motive power, and generates 1,250 newton metres (922 lbf·ft) of torque. The nominal figure has been stated by Bugatti officials to be conservative, with the real total being 1,020 metric horsepower (750 kW; 1,006 bhp) at 6,000 rpm.

German inspection officials recorded an average top speed of the original version of 408.47 km/h (253.81 mph)[ during test sessions on the Ehra-Lessien test track on 19 April 2005.

This top speed was equalled by James May on Top Gear in November 2006, at Volkswagen Group's private Ehra-Lessien test track. May noted that at top speed the engine consumes 45,000 litres (9,900 imp gal) of air per minute (as much as a human breathes in four days). Back in the Top Gear studio, co-presenter Jeremy Clarkson commented that most supercars felt like they were shaking apart at their top speed, and asked May if that was the case with the Veyron at 407 km/h (253 mph). May responded that the Veyron was very controlled, and only wobbled slightly when the air brake deployed.

For top speed mode the driver must, while stationary, toggle a special top speed key to the left of the driver's seat. A checklist then establishes whether the car and its driver are ready to attempt to reach 407 km/h (253 mph). If so, the rear spoiler retracts, the front air diffusers shut, and normal 12.5 cm (4.9 in) ground clearance drops to 6.5 cm (2.6 in).

The Veyron's brakes use cross drilled, radially vented carbon fibre reinforced silicon carbide (C/SiC) composite discs, manufactured by SGL Carbon, which have a much greater resistance to brake fade when compared with conventional cast iron discs. The lightweight aluminium alloy monobloc brake calipers are made by AP Racing; the fronts have eighttitanium pistons and the rear calipers have six pistons. Bugatti claims maximum deceleration of 1.3 g on road tyres. As an added safety feature, in the event of brake failure, an anti-lock braking system (ABS) has also been installed on the handbrake.

It is a limited (150 units, with the first 50 of these going exclusively to registered Bugatti customers) targa top version of Bugatti Veyron EB 16.4. The model has extensive reinforcements to compensate for the lack of standard roof,and small changes to the windshield and running lights. There are two removable tops, the second a temporary roof fashioned after an umbrella. The top speed with the hardtop in place is the same as the standard coupé version, but with the roof down is limited to 369 km/h (229 mph)—and to 130 km/h (81 mph) with the temporary soft roof.

Production began in the second quarter of 2009.

The vehicle was unveiled in 2010 The Quail, followed by 2010 Monterey Historic Races at Laguna Seca, 2010 Pebble Beach Concours d'Elegance.

The Super Sport is valued at GB£1.7 million.

As of 6 August 2014, 405 Veyrons have been produced and delivered to customers worldwide, with orders have already been placed for another 30. Bugatti was reported to produce 300 coupes and 150 roadsters up to the end of 2015. 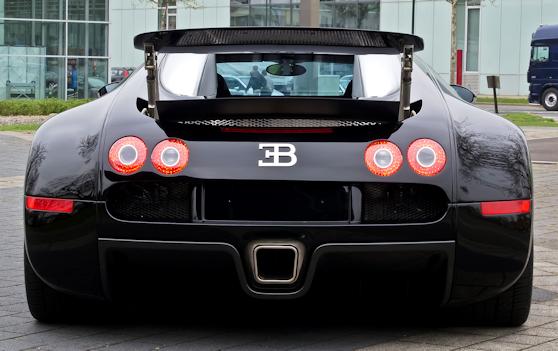