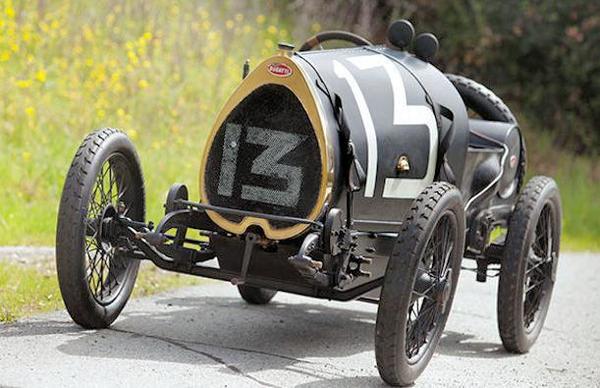 The Type 13 was the first real Bugatti car. Production of the Type 13 and later Types 15, 17, 22, and 23, began with the company's founding in 1910 and lasted through 1920 with 435 examples produced. Most road cars used an 8-valve engine, though five Type 13 racers had 16-valve heads, one of the first ever produced. The road cars became known as "pur-sang" ("thoroughbred") in keeping with Ettore Bugatti's feelings for his designs.The car was brought back after World War I with multi-valve engines to bring fame to the marque at Brescia. The production "Brescia Tourer" also brought in much-needed cash.

Ettore Bugatti is now a legendary figure in motoring and motor-racing history. The Italian-born French-domiciled artist-engineer produced some of the most aesthetically appealing classic cars of a classic era, and Bugatti as a marque was for many years top of the most-race-wins league.

founded largely by his Type 13 model, which became known subsequently with its derivative the Type 22 as the 'Brescia', after the Italian venue at which it scored its first major multiple victory.

Bugatti himself had achieved some sporting laurels with cars of his own design but built under other names before he established his own independent factory at Molsheim, Alsace, in 1910. The following year, 1911, saw what became known as the Grand Prix des Vieux Tacots('the Old Crocks' Grand Prix') run on a circuit at Le Mans.

Since major manufacturers were not ready for a resumption of formal Grand Prix racing, many dealers and interested sportsmen ran what cars they could find in this event. There, in amongst the mighty chain-drive Fiats, was a team of spidery little Bugatti Type 13s, and Ernest Friderich drove one home into second place overall. When racing resumed after World War I, modified 16-valve l.5-litre Type 13s reappeared under Bugatti factory colours, Friderich winning the Voiturette Grand Prix at Le Mans in 1920. This brought much publicity to the new marque, and at Brescia in 1921 Friderich led a Type 13 1—2—3—4 grand-slam victory which won the type its immortal name. When compared to the other crude voiturettes of the pre-1914 period—the Hispano-Suiza apart—the Bugatti Type 13 was truly a luxury car in miniature, and although it offered only 25 bhp or so, this power was
produced in a manner which anticipated the smooth and lively high-efficiency light cars of the thirties. No wonder the Bugatti made such a tremendous impact in 1911, and was good enough to continue very effectively
far into the twenties in modernized form.

Upon starting operations at his new factory in Molsheim, Bugatti refined his light shaft-driven car into the Type 13 racer. This included boring the engine out to 65 mm for a total of 1.4 L (1368 cc/83 in3). A major advance was the 4-valve head Bugatti designed — one of the first of its type ever conceived. Power output with dual Zenith Carburetters reached 30 hp (22 kW) at 4500 rpm, more than adequate for the 660 lb (300 kg) car. Leaf springs were now fitted all around, and the car rode on a roughly 2 m (79 in) wheelbase.

The new company produced five examples in 1910, and entered the French Grand Prix at Le Mans in 1911. The tiny Bugatti looked out of place at the race, but calmly took second place after seven hours of racing.

World War I caused production to halt in the disputed region. Ettore took two completed Type 13 cars with him to Milan for the duration of the war, leaving the parts for three more buried near the factory. After the war, Bugatti returned, unearthed the parts, and prepared five Type 13s for racing. 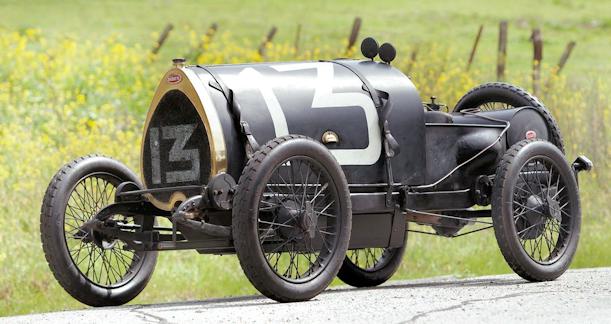 Type 22: The Type 15 was updated in 1913 as the Type 22. It had a larger roadgoing body, an oval radiator, and quarter-circle springs.

Type 13 Brescia: A Grand Prix for Voiturettes at Le Mans was the only French event of 1920, and Bugatti entered the two completed cars from Milan and one more from the remaining parts. Ettore's illegal act of placing a hand on the radiator cap during the race brought disqualification to the leading car, however.

The Type 13 was unbeatable. Bugatti's cars placed 1, 2, 3, 4 at the Brescia Grand Prix in 1921, and orders poured in. Capitalizing on this victory, all subsequent 4-valve Bugatti models would bear the Brescia moniker.

These were the only Bugatti models to locate the carburettor on the left hand side of the engine and the exhaust on the right. Front wheel brakes were added in 1926. 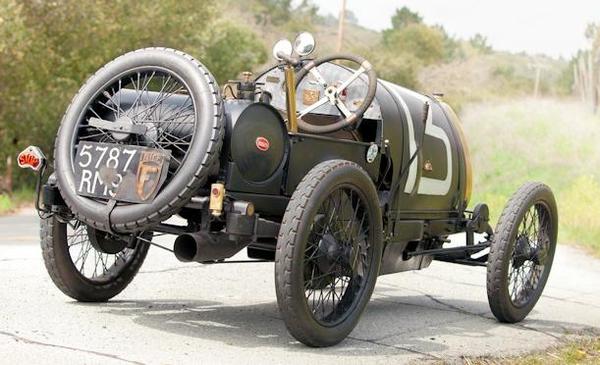