The Bugatti EB110 is a mid-engine sports car from Bugatti Automobili SpA. It was unveiled on September 15, 1991, in both Versailles and in front of the Grande Arche at La Défense in Paris, exactly 110 years after Ettore Bugatti's birth.

The car uses a double wishbone suspension, with the chassis built by Aérospatiale, an aircraft company, and made from carbon fiber. Equipped with Gandini's famous lifting scissor doors, it has a glass engine cover that provides a view of the V12 engine along with a speed-sensitive electronic rear wing that can be raised at the flick of a switch. The shift-knob is placed closer to the driver so that less time is taken to shift. Five pre-production prototypes with aluminum chassis were built, followed by eight with composite chassis. Following these, it is believed that only 95 GT and 31 SS production models were constructed.

Early in 1994 Formula One driver Michael Schumacher purchased a banana-yellow EB 110 Super Sport, giving the company a great deal of publicity. Derek Hill, son of American Formula One Champion Phil Hill, was one of the three drivers on a team that competed with an EB 110 in the United States at the 1996 24 Hours of Daytona.

Hard times hit the company in 1995 and, as result of chairman Artioli's over-ambitious purchase of Lotus in addition to the company's quest to develop the EB112 four door car, the company was bankrupt. Dauer Racing GmbH of Nuremberg, Germany, bought the semi-finished EB 110 cars in the assembly plant plus the parts inventory through the bankruptcy trustee. The remaining chassis and a version of the engine were later developed by B Engineering into their Edonis sports car.

Despite later racing for Ferrari from 1996 onwards and a high-profile collision with a truck the previous year (for which he blamed the braking system) Schumacher continued to retain the EB110SS. Schumacher sold the car in 2003 to Modena Motorsport, a Ferrari garage specialising in service, race preparation and sales of classic Ferraris in Germany. 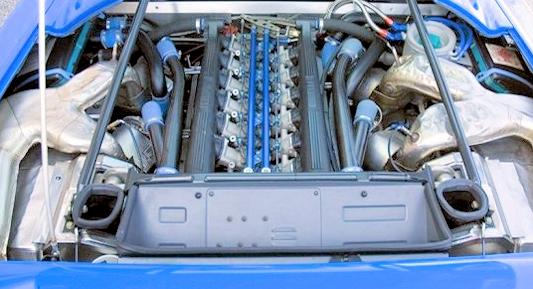 The B Engineering Edonis is based on the Bugatti EB110 Super Sport but has been extensively re-engineered, retaining little more than the carbon-fiber chassis from the original Bugatti. Both the exterior and interior of the car have been completely redesigned. The 3.5 liter Bugatti engine has had its displacement increased from 3500 cc to 3760 cc. The original four small IHI turbochargers have been replaced by two larger units from the same manufacturer. Engine power has been boosted from 450 kW (603 hp) and 650 N·m (480 lb·ft) of torque to 500 kW (671 hp) at 8000 rpm and 735 N·m (542 lb·ft).

In addition, the 4WD triple-differential drivetrain from the original Bugatti has been replaced with a much simpler and lighter RWD transaxle, thus saving approximately 70 kg (154 lb) from total weight. These power figures give the 1,500 kg (3,307 lb) Edonis a power-to-weight ratio of 480 bhp/ton. In addition, the engine's specific power output is an unprecedented 181 bhp/liter. The brand claims a maximum speed of 365 km/h (227 mph), while accelerating from 0 to 100 km/h (62 mph) in only 3.9 seconds.

B Engineering plans to build only 21 vehicles from chassis originally built for Bugatti by Aérospatiale (Most of the remaining chassis delivered to Bugatti prior to their bankruptcy were delivered to Jochen Dauer when he purchased the assets of the company).

As well as the Edonis, B Engineering also provide spare parts and service for the EB110.

Dauer Sportwagen in Nuremberg, Germany, bought the remaining stock of EB110 parts from the Bugatti factory A complete spare parts catalogue, with exploded diagrams and part numbers is now available from Dauer Sportwagen. The company has used the few remaining incomplete chassis to produce the limited edition Dauer EB110.

The EB110 participated in the 24 Hours of Le Mans in 1994. The car qualified a very competitive 17th overall and 5th in the GT1 class but did not finish the race. The car is now on display at the Lohéac Automobile Museum.