The Bugatti 16C Galibier is a luxury 5-door fastback concept car. Bugatti Automobiles S.A.S. unveiled the 16C Galibier at an invitation-only show held at the Molsheim, France assembly salon on September 12, 2009. The 16C Galibier was to use a front-mounted, 8.0 L twin-supercharged W16 engine delivering power via permanent all-wheel drive. A production version of the 16C Galibier concept, named the Royale, was expected to reach the market in 2014- 2015. In September 2013, Bugatti announced that it will be "pulling out" of the Galibier project. There are many contradictory reports as to the reasoning for the axing of the Galibier. There were reports that this was so that Bugatti could focus on a Veyron successor, however, according to VW Group design chief Walter de Silva, the next Bugatti will not be a Veyron successor but something rather different that will "redefine the benchmarks". 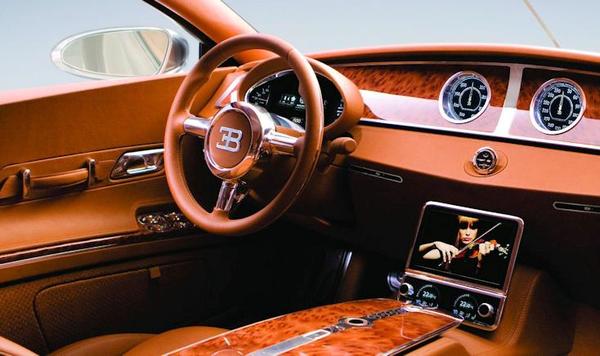 The 16C Galibier features a hood which opens in two parts along a central hinge. The 16C Galibier features the longitudinal rib also seen on the previous EB118 and EB218 concepts that references the longitudinal body seam of the Type 57SC Atlantic. The Gabilier will be most likely one of if not the most luxurious cars in the world, with interior features such as an analog timepiece which can be mounted in the dash as a clock or on a wristband as a watch.

Bugatti Automobiles S.A.S. debuted the Bugatti 16C Galibier 5-door fastback concept at an invitation-only show held at the Molsheim, France assembly salon on September 12, 2009. The 16C Galibier was first shown to the general public at the 2009 Frankfurt Auto Show.

The 16C Galibier uses a front-mounted, 8.0 L twin-supercharged W16 engine that delivers power via permanent four-wheel drive. The engine is derived from the quad-turbocharged unit used in the Bugatti Veyron. It will also incorporate an option for a hybrid powertrain, primarily to reduce pollution in urbanised environments.Performance figures have not been specified, but it has a power output in excess of 1,000 bhp (750 kW) while surpassing speeds of 235 mph (378 km/h).

A production version of the 16C Galibier concept, expected to be named the Royale, was originally scheduled to reach the market in 2013 In 2011, Bugatti postponed the release of the Royale to 2015 or later to refine the vehicle's design. Bugatti was expected to produce 3000 units of the Galibier compared to 300 of the Veyron. It was also expected to cost more than £1 million.

In an interview with Top Gear, President of Bugatti Dr. Wolfgang Schreiber said that Bugatti will never manufacture Galibier nor SuperVeyron because it will confuse their customers.