The Bugatti Type 57 and later variants (including the famous Atlantic and Atalante) was an entirely new design by Jean Bugatti, son of founder Ettore. Type 57s were built from 1934 through 1940, with a total of 710 examples produced.

Most Type 57s used a twin-cam 3,257 cc engine based on that of the Type 49 but heavily modified by Jean Bugatti. Unlike the chain-drive twin-cam engines of the Type 50 and 51, the 57's engine used gears to transmit power from the crankshaft.

There were two basic variants of the Type 57 car:

The Type 57 chassis and engine was revived in 1951 as the Bugatti Type 101 for a short production.

A rediscovered Type 57 sold for 3.4 million euros at auction on 7 February 2009 at a motor show in Paris.

The original road-going Type 57 included a smaller version of the Royale's square-bottom horseshoe grille. The sides of the engine compartment were covered with thermostatically-controlled shutters. It was a tall car, contrary to the tastes of the time.

The 2nd incarnation Tank, this time based on the Type 57C, won Le Mans again in 1939. Shortly afterwards, Jean Bugatti took the winning car for a test on the Molsheim-Strasbourg road. Swerving to avoid a drunken bicyclist on the closed road, Bugatti crashed the car and died at age 30.

The Type 57S/SC is one of the best-known Bugatti cars. The "S" stood for "surbaissé" ("lowered"). It included a v-shaped dip at the bottom of the radiator and mesh grilles on either side of the engine compartment.

Lowering the car was a major undertaking. The rear axle now passed through the rear frame rather than riding under it, and a dry-sump lubrication system was required to fit the engine under the new low hood. The 57S had a nearly-independent suspension in front, though Ettore despised that notion.

Just two supercharged Type 57SC cars were built new, but most 57S owners wanted the additional power afforded by the blower. Therefore, most of the original Type 57S cars returned to Molsheim for the installation of a supercharger, pushing output from 175 hp (130 kW) to 200 hp (150 kW) and 120 mph (190 km/h). 2014 saw the unveiling of Ralph Lauren's unique $40 million version of this classic. 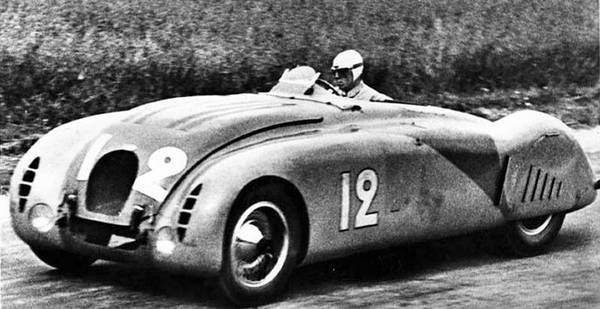 Atlantic and the "Aérolithe" Alloy Cars

The Atlantic body Type 57S featured flowing coupe lines with a pronounced dorsal seam running front to back. It was based on the "Aérolithe" concept car of 1935. Like the Type 59 Grand Prix car, the Aérolithe used Elektron (a magnesium alloy) or Duralumin (an aluminium alloy) for its body panels. Therefore, the body panels were riveted externally, creating the signature seam.

However the production Atlantics (just four were made) used plain aluminium, but the dorsal seams were retained for style, and have led to the car's present fame.

The famous, 57S-based, 57G Tank won the 1936 French Grand Prix, as well as the 1937 24 Hours of Le Mans. Three 57G Tanks were produced. Serial number 01, the Le Mans winner, is currently on display at the Simeone Foundation Auto Museum in Philadelphia.

The Atalante was a two door coupe body style similar to and built after the Atlantic, built on both the Type 57 and 57S, but with a single piece windscreen and no fin. Only 17 Atalante cars were made, four of which reside in the Cité de l'Automobile Museum in Mulhouse, France (formerly known as the Musee Nationale de L'Automobile de Mulhouse). The name Atalante was derived from a heroine of Greek mythology, Atalanta.

In 2008 the Bugatti Type 57S with chassis number 57502 built in 1937 with the Atalante coachwork for Francis Curzon, 5th Earl Howe was discovered in a private garage in Newcastle upon Tyne, having been stored untouched for 48 years and known about only by a select few people It was auctioned in February 2009 at the Retromobile motor show in Paris, France, fetching €3.4 million (~ US$5 million), becoming one of the highest valued cars in automotive history, owing much to its extremely low mileage, original condition and ownership pedigree.