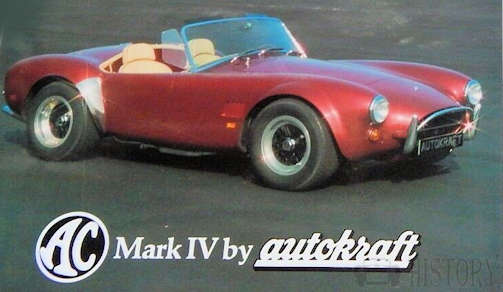 Autokraft was a British manufacturer of sports automobiles at Brookland’s Ind. Park, Weybridge, Surrey . The brand name was Autokraft.

With a joint venture with Ford In 1986 they purchased AC Cars ,caling them the only one company officially authorized to call its the car the 'AC Cobra'.Production of the  Two seat, two door sports convertible Cobra was strictly limited.

Autokraft built these Mk IV versions of one of the most famous classics of all time at their factory at Brookland’s in extremely small quantities to special order. Using the original AC jigs, these inlike most replicas had Bodywork of  hand-rolled 16 gauge aluminium alloy bodied cars with some modernizations over the original.Features such as leather Seats, facia and door panels trimmed in Connolly hide. Deep pile Wilton
carpeting bound in leather. and significantly larger cockpit but otherwise the spirit of the original Cobra remains the same.

They produced the Autokraft AC Mk IV Cobra.  A total of 480 cars of all versions were built until 1996

At the 1990 Geneva Salon the Lightweight 1,070 kg version was presented with 370 hp it featued alloy heads, and a  Holley four-barrel carburettor.