Commercial Automotive Manufacturer: of Great Britain from 1922 to 2015. 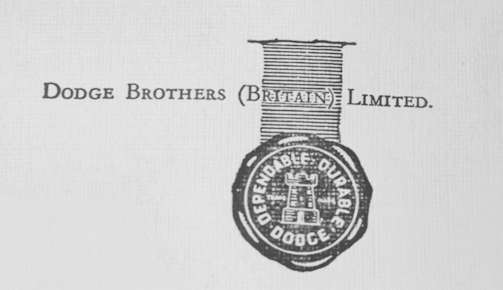 The history of the Dodge Brothers starts in the United States of America. Mr. John F. Dodge and Mr. Horace E. Dodge commenced producing motor vehicles in 1914.In the early twenties cars and vans had been imported and distributed by the British Automotive Company Limited of 196, Great Portland Street, London.

The first commercial vehicle to be established in the United Kingdom was the Dodge 15 cwt van used mainly by the newspaper industry for newspaper delivery. The Evening News was one of the main companies to use the vehicle.

It was also exhibited in 1921, and to encourage sales a dinner was held annually at London Savoy Hotel for all the Dodge agents already established in the U.K.

It was 1922 when it came to the formation of a British company for the sales and ultimate production of Dodge vehicles.

The company was named as Dodge Brothers (Britain) Limited, with its first factory at Stevenage Road, Fulham, London.

In 1923 almost On occupation of the factory Dodge introduced a new 1 ton powered by the American Dodge four cylinder petrol engine, and at this time the products were imported from the States completely assembled.

However, in 1925 the company needed larger premises, and moved to works at Park Royal, Willesden Lane, London, where a new I ton chassis was announced and exhibited at Olympia in October that year. More and more attention was being paid to the commercial vehicle business end and less to the motor car. Business flourished, the number of products increased and by 1928 the company was marketing some fifteen chassis and had twenty different types of bodies available. It was in 1929 when acquisition of the Dodge organisation was made by the great Chrysler Corporation of the United States, and the British company was part of the arrangements.
The Chrysler Corporation were already in Britain and possessed a factory in Kew, so in 1930 the old Dodge organisation in Britain moved to Kew, having both Chrysler and Dodge activities in the same factory; Dodge however kept its own name in marketing products. The first Dodge commercial from their new factory in Kew was a 3(ton)cwt fitted with the American petrol engine and transmission, otherwise it was British built.

The prototype had been built in 1930 at Kew, shipped to the States for the Chrysler boys to inspect and test, this was accomplished and approval was given. The prototype was returned to Kew where it remained as a pilot model for production reference. The range which followed was finally introduced in 1933 with the name the 'Surrey Range'. Initially 30 cwt and 2 ton chassis closely followed by a 3 ton, a 4 ton, and a 5 ton range.
It was 1938 that Chrysler realising that the best thing to do to capture a good market in Britain was to encourage the British company to build home produced trucks. The first of these was a 5 tonner powered by a British diesel engine. 1939—1945; during which truck production, except for the
fighting forces was limited, the main war work for both Chrysler and Dodge was in aircraft production.
The war ended, the civil transport of the country was in a poor condition; so came the boom. The return to pre-war truck production was not very easy for the companies as the Kew plant had been extensively damaged by enemy action. 1949 saw the introduction of the first all British built truck range. A steel cab, of semi-forward control, and very successful, remained in production until May 1958.
Kew once again had to be extended, and the new assembly shop was completed in 1952 to produce a new petrol engine. This gave the range built at Kew, both labour and content. The semi-forward control incorporated the Leyland 'Comet' cab but using an individual front end and a new grille, in a similar fashion to the Ford model ET6 for the same period.
Dodge commenced investigation on the marketability of producing a normal control range to compete with Bedford who at that time were supplying most of the market.

Also at the same time further extensions were being considered at the Kew plant, and a new set of offices and a Spare Parts Division were built.
Progress was made during the next two years when a new forward control range of vehicles was introduced. This supplemented the normal control and replaced the old existing semi-forward control which had had a successful run. Everything flourished up to 1965 when a deal was negotiated between the Routes Group and Chrysler Corporation.

The result, the Rootes Group taking over the Dodge business and incorporating it with their own commercial enterprise, Commer. Shortly after that the Chrysler Corporation acquired increasing interest in the Rootes Group, finally resulting in a complete take-over.

During the year 1966 certain functions were transferred from Kew to the Commer plant at Luton, this process continued until the final transfer of all the Dodge business and activities went to Luton, and Dunstable. The Kew plant was finally closed down in 1968. Further moves transpired from Dunstable to Coventry, where Commer, Dodge and Karrier enjoy the same vehicle with different badging.

By 1980s, the Renault logo joined the nameplate, and by  1990s, the as Dodge, Karrier, and Commer met their final end.The last Kew Dodge trucks were as Askam Fargo and DeSoto names and finally folded in 2015. 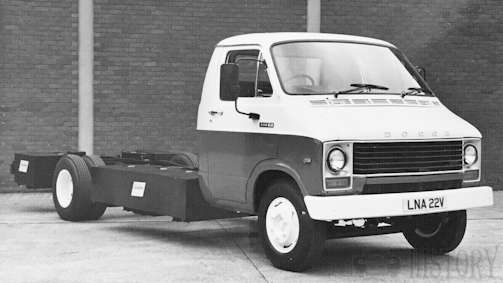