Carmakers manufactured in Bromley, Kent Great Britain from 1960 to 1965. 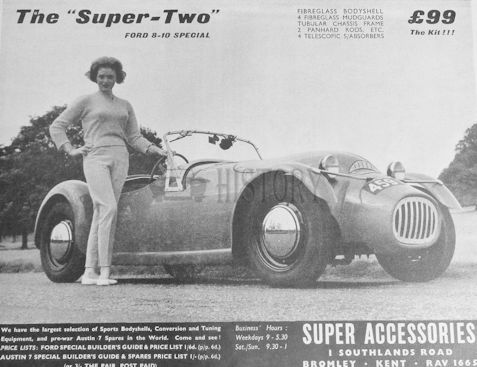 Super Accessories Ltd. was a British kit car brand in the 1960s from Bromley in Kent .

There began the production of automobiles and kits in 1960s . They were sports roadster . By 1965 production ended

Les Montgomery worked in the furniture industry. In 1957 he founded the company in Bromley in the London Borough of Bromley and began with the production of automobiles and kits .With a large selection of Sports Bodyshells, Conversion and Tuning Equipment, and pre-war Austin Spares The brand name was super , although occasionally Super Three and Super Two for two special models is called. In addition, the company was active in vehicle tuning , sold vehicles of SE Hamblin , organized in May 1961 a kit car show in Biggin Hill , which was possibly the first of its kind, and took over in 1962 Markham-Peasey Laminated Plastics , who created the Markham Peasey. 1965 the production ended. In total, about 265 copies were created.

The first model was the 750th . The open body was made of aluminum and could accommodate two people. Between 1957 and 1963, 20 copies were made.

The model Sportsman came in the same time only 15 copies. The base was the chassis of the Austin 7 . The open two-seater body designed by Jim Shaw was flatter and seemed more modern than the 750's .

The most successful model was the Two with 200 units between 1960 and 1965. A Bowden Engineering tubular frame with 90 inches (228cm ) wheelbase formed the base. A four-cylinder engine from the Ford Prefect (E 93 A) powered the vehicle. The body of fiberglass had mitlenkende front fenders. It was created in connection with Hamblin. The kit cost £99 without a motor . Leighton Motor Company from Biddenden led by Stuart Souter tried between 2008 and 2009 to revive this model again.