Automotive manufacturer of Great Britain from 1965 to 1967. 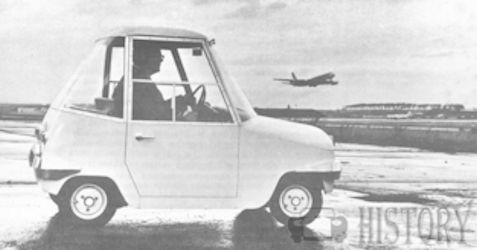 Scottish Aviation was a British aircraft and electric car manufacturer based in Prestwick , South Ayrshire ,

The company was founded in 1935 as a flight school and began in 1938 with the maintenance of aircraft. During the Second World War , it took over the final assembly of other aircraft and the maintenance of Consolidated B-24 Liberator bombers.After the war, the company developed and built the military transport aircraft Pioneer and Twin Pioneer . After the collapse of the Handley Page Aircraft Company in1970, it took over the construction of the Jetstream transport and training aircraft. From the 1970 also bankrupt manufacturer Beagle Aircraft , it acquired the rights to the training aircraft Bulldog .In 1977, Scottish Aviation merged with British Aircraft Corporation , Hawker Siddeley Aviation and Hawker Siddeley Dynamics to form British Aerospace . Some parts were later sold to the American manufacturer Spirit AeroSystems .

In 1965, the company began producing electric cars . However, the first public presentation took place in 1967 at the Ideal Homes Exhibition held.  Also in 1967 ended the production. A total of twelve vehicles emerged. Of which ten were delivered to various energy companies. The brand name was Scamp .