Automotive manufacturer of Glasgow.Great Britain from 1917 to 1968.

The William Beardmore and Company was a Scottish engineering company and shipyard based in Glasgow .

The founder William Beardmore first established in Parkhead / Glasgow, a company that dealt with the production of steel parts for the shipping industry, the company William Beardmore & Co. In 1899 Beardmore acquired the shipyard Robert Napier & Sons in Govan in Glasgow . In 1905 another shipyard was opened: the Naval Construction Works in Dalmuir at Clydebank .

Through constant expansion - Beardmore acquired another shipyard, a vehicle production and a steelworks - the company became the UK's most important arms company in the years before the First World War with at times more than 40,000 employees. Manufactured engines, warships, tanks and aircraft.

After the end of the First World War, the product range was switched to civilian ships such as passenger steamer and cargo ships as well as locomotives and engines for ships and aircraft. From 1917, Beardmore also manufactured automobiles . From 1921 to 1924 motorcycles and built-in motors of the Precision brand were built. Many of these built-in motors have been supplied to Cyclecars manufacturers.Taxis were created until 1968  .

However, it went downhill economically, and by the late 1920s, bankruptcy threatened. So the formerly large company was sold piece by piece. The shipyard Dalmuir Naval Construction Works was taken over in 1930 by National Shipbuilders Security , closed and demolished. The main factory in Glasgow existed until 1975 and was then demolished; In its place today is a large shopping center. 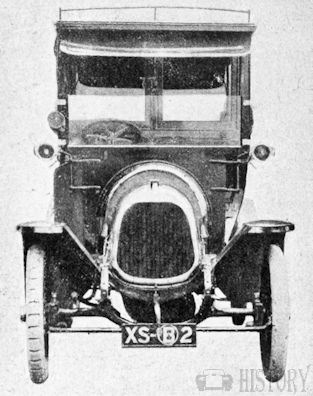