Automotive manufacturer of Colchester , Essex.Great Britain from 1991 to 1995. 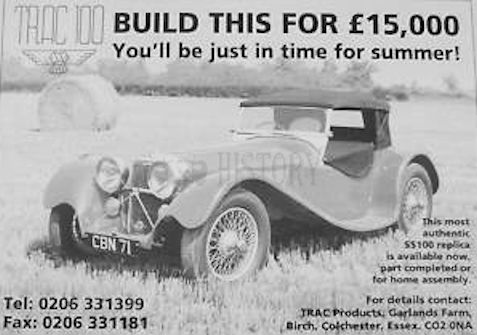 TRAC Products Limited was a British manufacturer of automobiles in the 1990s .TRAC stood for Terry Rowing Auto Components .

Terence Malcolm Rowing, who is also the restoration operation RM Restorations (Colchester) Limited operation, and Anne Rowing founded in 1991 the company in Birch at Colchester in the county of Essex . They started with the production of automobiles and kits . The brand name was Trac . 1995 ended the production. In total, about ten copies were made. Suffolk Jaguar continued production under its own brand name.

The restoration company had already restored several Jaguar SS100s . TRAC produced replicas of this model. The chassis base formed a ladder frame. On top of that , an open body made of fiberglass was assembled, which consisted of one part. A six-cylinder engine from the Jaguar XJ 6 powered the vehicles.