Car manufacturer of Rotherham, South Yorkshire; Great Britain from 1989 to 1994. 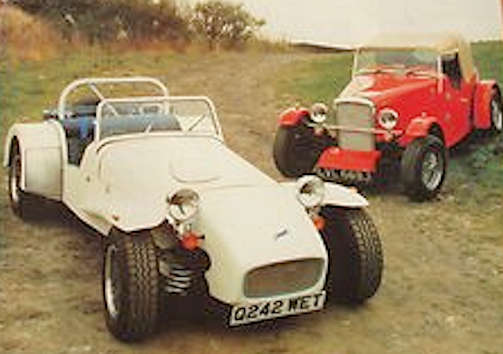 T & J Sportscars was a British manufacturer of automobiles .The brand name was T & J

The Trevor and Denise Barnes and Josef Horvaths founded the company in Rotherham , County South Yorkshire in 1989 .  They took over projects from JC Sportscars and began producing automobiles and kits. By 1994  production ended.

T & J Sportscars took over the model Locust from JC Sportscars in 1989 . This was a Lotus Seven- inspired open two-seat sports car. As a special feature, in part only plans for the construction of the vehicles were sold. Initially, many parts came from the Triumph Herald , later from the Ford Escorts and Ford Cortina . White Rose Vehicles from 1993 to 2000 , Roadtech Engineering from 2001 to 2006 and BWE Sports Cars since 2000 continued production.

The Midge was also designed by JC Sportscars and was taken over either in 1989 . This was a roadster in the style of the 1930s, which was also sold as a kit and as a blueprint. Again, many parts came from the Triumph Herald and the Ford Escort. White Rose Vehicles from 1993 to 2000 and Midge Owners 'and Builders' Club since 2000 continued production.

The Hornet was an in-house development. It was similar to Locust , but easier to make. This appeared in around 1990 . Many parts came from the Ford Cortina. Various engines from Fiat , Ford and Toyota powered the vehicles.  BWE Sportscars continued production from around 1994 .