Car manufacturer of Burnham-on-Crouch , Essex.Great Britain from 2002 to 2007. 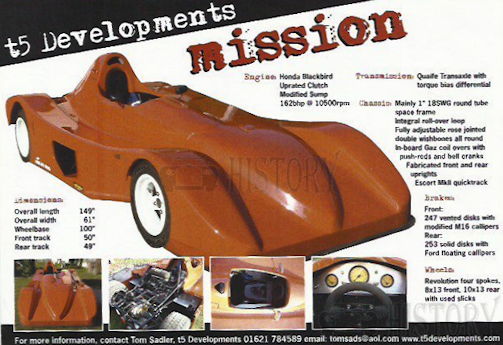 T 5 Developments was a British manufacturer of race type kit car automobiles in the 2000s .

Tom Sadler founded the company in 2002 in Burnham-on-Crouch in the county of Essex . He started producing automobiles and kits . The brand name was T 5 . 2007 ended production. Total made about twelve copies.

The only model was the mission . This was an open single seat racing sports car , which could also be built  street legal. The base was a spaceframe frame with 100" wheelbase with integral roll over loop. Different engines of motorcycle engines such as the Honda Blackbird to four-cylinder engines from the Ford Pinto to V8 engines from Jaguar Cars  a quaife transaxle,with Gaz shocks and M16 calipers with deep revolution wheels for use with slicks for race cars
.