Automotive manufacturer of Kingsbridge , Devon.Great Britain from 2006 to 2013. 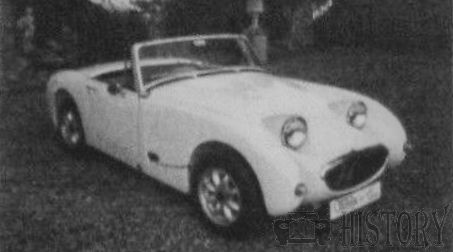 Tifosi Sports Cars from Chulmleigh in the county of Devon turned parts for since about 2002 Automobile ago. In 2006, the production of automobiles and kit cars was added. The brand name was Tifosi .

Kevin Neil Moore founded The Star Motor Company Limited at Kingsbridge , Devon on January 4, 2008 . Tracey Moore was also active in the company. They continued production. On August 13, 2013, the company was dissolved.

In addition, from 2011 there was a connection to Quantum Sports Cars from Chulmleigh under the direction of Mark Burley. Halls garage from Bourne in Lincolnshire took over in January 2014, the designs and the rights to the name and continues since then the production.

The first Rana model was released in 2006. This was the replica of the first-generation Austin-Healey Sprite . Chassis of later generations of this model, or alternatively of the MG Midget , formed the basis. This model found about 50 buyers.

The similar Rana RS from 2009 remained a one-off. He had a separate spaceframe frame. The vehicle was longer and wider. The Rana TS was only available in 2010. Although visually similar, it is based on the Mazda MX-5 . From this model created about two vehicles.

The SS was released in 2011. It was based on the normal Rana , but had a coupe body as the Sebring racing versions of the 1960s. This found about 25 buyers.