Automotive manufacturer of Sherwood Nottingham.Great Britain from 1913 to 1914. 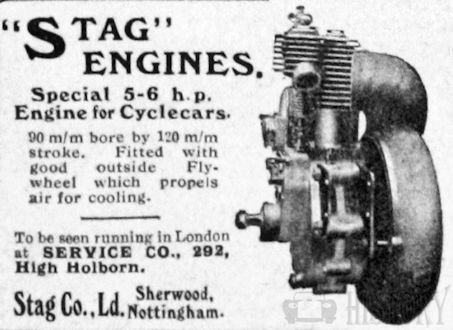 The Stag Company was a British manufacturer of automobiles , motorcycles and engines from the 1910s.

The only model was a cyclecar.A self-produced single-cylinder engine with 763 cc displacement and 5-6  PS  and 5.5 PS driving through a belt to the drive axle. The three-speed gearbox came from Jardine. The original price was £89.25  .

The AW Heybourn & Company and the Oakleigh Motor Company used built-in motors of the Stag Company in their vehicles.