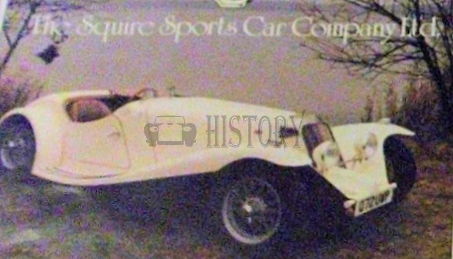 Phil Kennedy founded Squire Sports Car Company Limited in 1984 in Hartlebury, Worcestershire . He started with the production of automobiles and kits . The brand name was Squire . The company moved several times: 1986 to Walsall in the West Midlands and 1988 to Bridgnorth in Shropshire .  1993, Rodney Rushton took over, renamed Squire Motors Limited as relocated to Crediton , Devon . In the same year the production ended. Overall emerged  about 20 copies. Marlin Engineering took over the project but did not produce anymore.

The vehicles were similar to the models of Squire Car from the 1930s. A steel ladder frame formed the base. With a open two-seater body . Four-cylinder crossflow engine from the Ford Cortina to the vehicles. Later, four-cylinder engines from Alfa Romeo with 1750 cc displacement and V8 engines from Rover were available. At first there was a body made of aluminum and only the fenders from glass fiber reinforced plastic . In 1987, the original model in renamed as the sport with a cheaper to produce and buy body made of fiberglass expanded the range.