Automotive manufacturer of Thelwall , Warrington , Cheshire.Great Britain from 2003 to 2006. 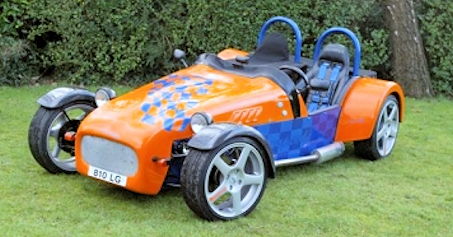 Shawspeed Kit Cars Limited is a British company in the automotive trade and former automobile manufacturer.

Jonathan Nicholas Sharples, who previously along with Lindsey Shaw Shawspeed operation, and Pauline Shaw founded on 22 May 2003, the company in Thelwall in Warrington in the county of Cheshire . They began producing automobiles and kits . The brand name was Shawspeed . 2006 ended production. Susan Rose Sharples has been the director since May 21, 2009, replacing Pauline Shaw, who resigned her post as director the day before. The company is still active in the field of vehicle and engine tuning and preparing rally and racing cars.In total, about 15 vehicles were created.

The offer was a model that was similar to the Lotus Seven . The open body could accommodate two people. The SK 01/06 drove a four-cylinder engine from Ford with 1,600 cc displacement to. The SK 2.0 had a Ford Duratec engine with 2 liter capacity. In SBK different motorcycle engines were used.