Kit Car manufacturer of Bristol.Great Britain from 1984 to 1987. 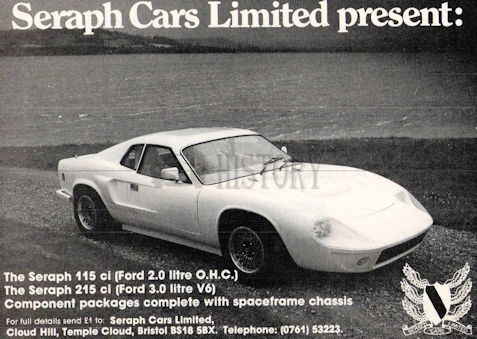 Seraph Cars , previously Motorstyle , was a British manufacturer of sports kit car automobiles in the 1980s from Bristol.

The company Motorstyle from Bristol began in 1984 with the production of automobiles and kits . The brand name was Seraph. In 1985 this was renamed Seraph Cars . 1987 ended production. In total, only 36 copies were made.

The first model was the 1984 Sports Racer  This coupe was based on a spaceframe frame. A four-cylinder engine from Ford was behind the seats in mid-engine layout. There were interested, but no buyers. Thus, the vehicle remained a unique piece.

From 1985, the models 115 and 215 were created . For this purpose, the Bonito Performance Center has adopted a model that was previously marketed as Bonito . The basis was the chassis of the VW Beetle . On a coupe body was mounted. The 115 ci received a four-cylinder engine from Ford with 2000 cc displacement and the 215ci Had a Ford 3 liter Essex V6 or a option for the V8 engine from Rover .