Automotive manufacturer of Wallsend , Tyne and Wear.Great Britain from 1984 to 1987. 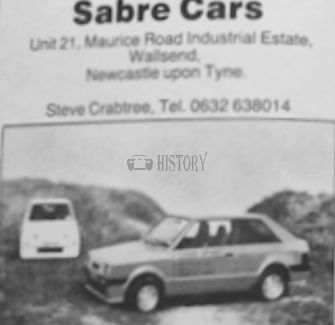 Saber Cars was a British manufacturer of kit automobiles in the 1980s .

Steve Crabtree founded the company in 1984 in Wallsend ,Tyne and Wear . He started producing automobiles and kits . The brand name was Saber . 1986 ended production. In total, about 19 copies were made.  In addition, the company made in 1984, some brand vehicles Royale .

The sprint was the first and best selling model. It was based on the Mini with a modified rear subframe. With a body made of GRP carbon fibre . The small station wagon could accommodate four people. In 1985, the front was redesigned and received double round headlights. DC Kit Cars of Newcastle upon Tyne in Tyne and Wear, led by David Cawston, continued production until 1987. In total, about 14 copies were made Basic kit from £1195 plus vat

The Vario was from 1985 to 1986 in the offer. The rear part of the roof was interchangeable, so that a convertible was born. This model found about five buyers.