Automotive manufacturer of Melton Mowbray , Leicestershire.Great Britain from 1983 to 2000. 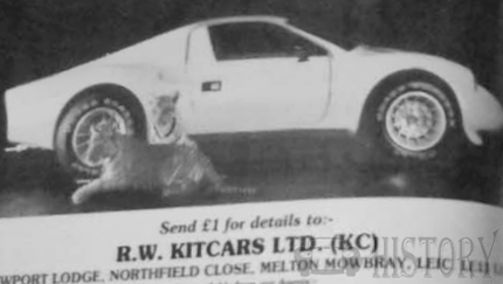 Roger Woolley founded the company in 1983 in Melton Mowbray , County Leicestershire . He started producing automobiles and kits . The brand name was RW . In 2000 the production ended. In total, over 800  were created.

The first and best-selling model was karma . RW acquired from Automobile Design & Developments its model AD Karma , which was previously marketed under the brand AD . The vehicle was similar to the Dino 246 . The chassis from VW Beetle with its four-cylinder flat Boxer engine in the rear, a chassis with front engine from the Ford Cortina and one with a mid-engine  V8 of Rover . From this model created about 795 made.

The chopper was from 1983 to 1984 on offer. That was a trike with engine from the VW Beetle. Of these, only about five copies were made.

The Taurus was the replica of a Lamborghini Countach . This was originally also a project of Automobile Design & Developments. Also this model was based on the VW Beetle. Between 1985 and 1986 created about 35 vehicles.

The 427 was the successor of the AD 427 and thus the replica of the AC Cobra . 18 vehicles had a front engine with rear wheel drive.